The success of Harvey Milk High School, the nation's first publicly financed school for gay, lesbian and transgender students, has spawned a new, specialized school to address the needs of another group of teens, often the subject of abuse and name-calling from their "normal" peers. Under the auspices of Harvey Milk's principal, Bill Salzman, the New York City public school system has opened the "Adam Clymer School for Major League A-holes."

With little fanfare, Adam Clymer High School opened this past September in an undisclosed location on the westside. Students who attend this unique high school must receive a recommendation from a former teacher, or take a psychometrics exam which establishes the pupil's compatibility with the Adam Clymer program.

Students of Adam Clymer H.S. say that, rather than being teased for being "different" they are applauded. Freshman Alex Baldman explains: "It used to be that when I threw a hissy in gym class because I said it was too cold to wear shorts, all the other kids would call me names. Now, the gym teacher, Mr. Johnson, gives me extra points."

Transfer student Jack Hass concurs, "My dad drew all the graphs and wrote the formulas for my chemistry class presentation. In my old school, the kids would have been like: 'You suck. Your dad did all that.' But here, you're a freak if your dad doesn't do your report for you."

This week, students have been decorating a "Holiday Shrub" with photos of "A-hole Hall of Famers," cut from the pages of old Newsweek magazines and decorated with glitter. Rosemary O'Connell, a burly tomboy with a crewcut gives visitors a "tour" of the shrub ornaments. "That's Senator John McCain... and there's Kofi Annan-- he's the Secretary General of the U.N.-- I wish the U.N. ran the world... and this is Senator Hillary Clinton, who just came back from visiting the military in Iraq-- she's the best. I'm going to vote for her when she runs for president." At the top of the shrub, the photograph which serves as the "star" is none other than New York Times journalist, Adam Clymer.

Down the hall, the lunchroom is abuzz with excitement as word gets out that a very special guest a-hole would be visiting the school. Rumors are confirmed when an intercom announcement requests the presence of all students in the auditorium. The greenish brown stage curtains part to reveal school advisory board chairperson Barbra Streisand.

In a black turtleneck and slacks, and perched on a barstool, Ms. Streisand speaks softly into her microphone about the upcoming elections. "Shhhhhhh....shhhhh....Listen," she says, over the chatter of excited students. "We all know who won the last election... we can't let them steal it away from us again... this is about the future of the country. That's right. Bush Junior has done so much damage... it will take years to recover, but we can only do it if the best man gets elected...." Students began calling out the name of Howard Dean and cheering.

Next semester, Principal Jessica Langely promises guest lectures from actor/activist Ed Harris and Senator Chuck Shumer. "That is, if this lawsuit by the right-wing extremists doesn't shut us down," she adds. 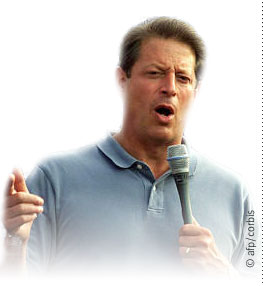 Visiting professor Al Gore tells students to stay true to who they are. "And if something doesn't go your way, take it to court." (AP Photo/Tipper Gore)

How do you keep Ravens off your yard?
Put up a goal post.

There's a few people on FR I'd like to recommend for this program... but I won't. ;)

If art imitates life, you may be certain that morons unconsciously imitate parody even more frequently. :^)