Joe Biden’s quick trip to Pittsburgh and his speech there Monday condemning urban violence show Democrats now recognize they made a major mistake in ignoring the problem at their convention. They’ve read the polls and finally realize voters care about the arson, shootings, and looting -- and their own safety. That’s a problem for the Biden campaign, which had almost nothing to say about the violence all summer. Now, they are doing “cleanup on Aisle 6” and there’s a lot of broken glass around.

"Rioting is not protesting,” the Democrats’ presidential nominee told the Carnegie-Mellon University audience. “Looting is not protesting. Setting fires is not protesting. ... It's lawlessness, plain and simple." That’s true, but it was no less true two weeks or two months ago. Even now, Biden’s main thrust is less against the violence than against President Trump for “fomenting it” and “sowing chaos.” As Biden put it, "The simple truth is Donald Trump failed to protect America. So now he's trying to scare America.”

TOPICS: Campaign News; Issues; Parties
KEYWORDS:
Boy, do Democrats come out in droves recently blaming Trump for the riots and violence this summer. Esp. almost all of them blame escalating violence on White Supremacist/Nationalist Trump supporters. As if the whole past two (three?) months never happened, Dems only counted the recent days as relevant.

It would have a slime chance of working (for long time entrenched Dems), when/if Biden come out early forcefully and unequivocally condemn the wanton destruction and without 'qualifying definition' on what The Left defined as violence and rioting.

But the bottom line is that Biden/Harris team do not have a plan. They don't tell us what they will actually do about it, only blaming "Trump's America" is not going to cut it.

And this is just one of the top issues voters are concerned about. ===> The number one top concern is still economy (and jobs). Again I don't see Biden/Harris has an advantage there.

Biden and Dem Leaders(!) still have the delusion that they have any control or influence over Marxist BLM, those street thugs, and Antifa. [I probably don’t need to distinguish one from another.]

But the ‘cartoon’ is basically spot on.

I found this in an article on the Trib Live site about the “event”:

“The campaign said it opted against holding a traditional campaign event, with large crowds flocking to a venue and the area around it, to adhere to guidelines aimed at limiting the spread of covid-19.

More than 100 Biden supporters and a few Trump supporters waited for hours outside the venue. They didn’t get a glimpse of Biden even as the motorcade left at 4 p.m.”

Essentially, they are saying that the only people at the “event” was news crews, and only 100 showed up outside hoping to get a glimpse of their candidate which they didn’t even get that.

I saw that at the conclusion of his rant he walked away without answering a couple of questions shouted at him.

How pathetic can you get?

4 posted on 09/01/2020 7:23:49 AM PDT by euram
[ Post Reply | Private Reply | To 1 | View Replies]
To: Sir Napsalot
In his speech at "Carnegie Mellon" (i.e. warehouse near his basement) Joe actually said if he had been president he would have used secret federal agents like he and Obama had used on occasion during their administration.

This is the same narrative that all the Dems have been pushing: its the sight of police and feds that is causing the people to riot. If everything was done on the down low then none of this rioting or looting would have occurred.

The scarier thing is when did Obama use secret agents? Was Joe referring to Bundy Ranch? What about the incident up in Oregon where a man got killed?

This year keeps getting weirder and weirder.

What we saw yesterday is the most risk taking his handlers will dare and it was a bust. The avoidance of personal contact, the confusion in the speech and the fleeing of the stage while avoiding questions only solidify the senile impression. That performance was the best Joe’s got! The handlers were probably high fiveing because Joe got in and out without a major catastrophe. They better keep him in the basement before he gets the election completely out of fraud range.

I got the impression as he walked away that he was pissed off about having to do this “campaign event”...

Maybe he thought it was a “mic drop” moment, but it was more like he stormed out of the hall... 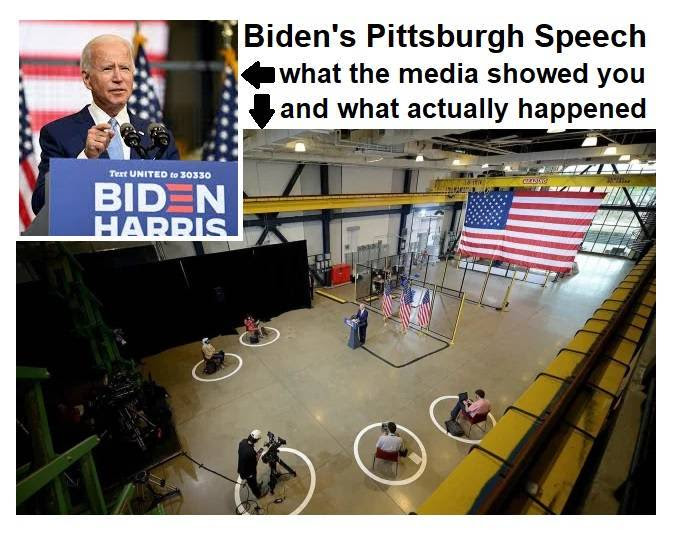 And a tweet about the Biden 'crowd' outside. here

His campaign is so fake as to hide his dementia it’s frankly unbelievable. When I see this stuff I begin to believe the moon landing was faked. KAMALA aids and abets the rioting hordes...BEFORE the Democrats got the bad news polls and turned tail

“ Now, they are doing “cleanup on Aisle 6” and there’s a lot of broken glass around.”

They know Biden is a long shot, but now they are looking at down ticket damage from their out of control useful idiots.