EXCLUSIVE: What WASN'T in Hunter Biden's book: How he got unauthorized Secret Service protection...
The Daily Mail ^ | 4/8/2021 | JOSH BOSWELL

DailyMail.com can reveal those secrets after contents of his abandoned laptop - including a cache of 103,000 text messages, 154,000 emails, more than 2,000 photos - were verified by top forensics experts

Hunter left his MacBook Pro laptop at a Wilmington, Delaware computer repair shop in April 2019 and never returned for it

In texts from 2019, Hunter begged his father to run for president to salvage Hunter's own reputation

Hunter repeatedly dodged police action against him, despite constantly dealing with drug dealers and prostitutes and having multiple run-ins with the law

The president's son was guarded by a Secret Service agent while on a 2018 drug and prostitute binge in Hollywood, despite not being entitled to protection at the time

Hunter Biden's 'tell-all' autobiography promised the unvarnished story of his struggles with drugs, family turmoil and his controversial love life.

Now DailyMail.com can reveal the secrets Hunter chose not to divulge, exposed in the contents of his abandoned laptop and verified by top forensics experts.

You can see photos of Hunter pulling the hair of a prostitute..if Hunter were the son of a Republican that photo would be everywhere “See, this is what the GOP thinks of women, nothing more than play things” but hey since its Hunter BIDEN its all good..Hunter is a disgusting child molesting PERVERT

You think America's enemies, domestic and foreign--i.e. all those who HATE the USA and intend to destroy it--are not delighted to have Democrats in the White House, both houses of Congress, and the Supreme Court???

You're at a cross-road, America. Your children can turn out like the Trump children or like Hunter Biden. The choice is yours. 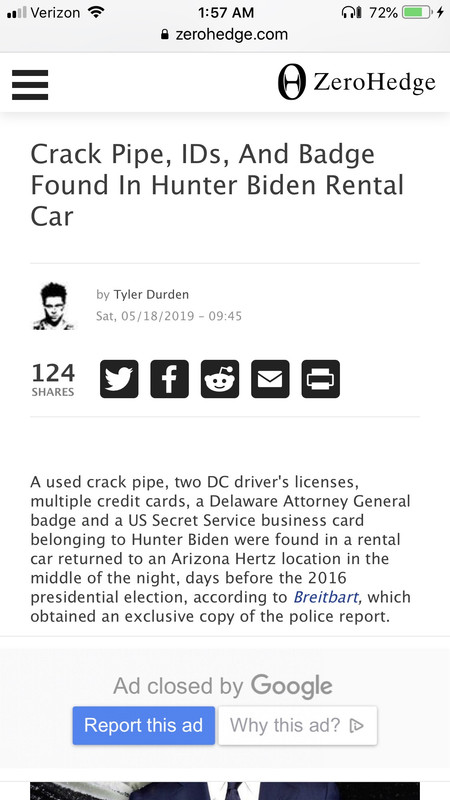 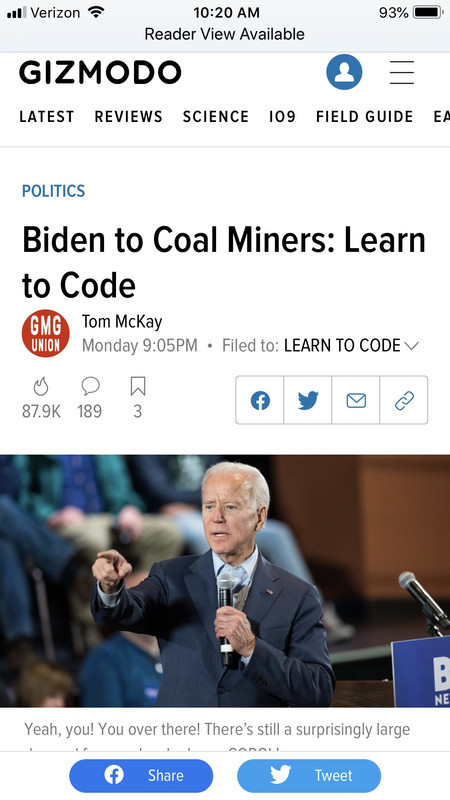 If we had an HONEST judicial system, both Biden and Son would be in Jail.

“What wasn’t in Hunters book”

Words with letters in them? Coherent ideas? Pictures of hookers that are still alive?

TABLE OF CONTENTS I. EXECUTIVE SUMMARY II. INTRODUCTION
III. CONFLICTS OF INTEREST
IV. THE VICE PRESIDENT’S OFFICE AND STATE DEPARTMENT OFFICIALS WERE AWARE OF BUT IGNORED CONCERNS RELATING TO HUNTER BIDEN’S ROLE ON BURISMA’S BOARD.
V. SECRETARY OF STATE JOHN KERRY FALSELY CLAIMED HE HAD NO KNOWLEDGE ABOUT HUNTER BIDEN’S ROLE ON BURISMA’S BOARD.
VI. STATE DEPARTMENT OFFICIALS VIEWED MYKOLA ZLOCHEVSKY AS A CORRUPT, “ODIOUS OLIGARCH,” BUT VICE PRESIDENT BIDEN WAS ADVISED NOT TO ACCUSE ZLOCHEVSKY OF CORRUPTION.
VII. WHILE HUNTER BIDEN SERVED ON BURISMA’S BOARD, BURISMA’S OWNER, ZLOCHEVSKY, ALLEGEDLY PAID A $7 MILLION BRIBE TO UKRAINE’S PROSECUTOR GENERAL’S OFFICE TO CLOSE THE CASE.
VIII. HUNTER BIDEN: A SECRET SERVICE PROTECTEE WHILE ON BURISMA’S BOARD.
IX. OBAMA ADMINISTRATION OFFICIALS AND A DEMOCRAT LOBBYING FIRM HAD CONSISTENT AND SIGNIFICANT CONTACT WITH FORMER UKRAINIAN OFFICIAL ANDRII TELIZHENKO.
X. THE MINORITY FALSELY ACCUSED THE CHAIRMEN OF ENGAGING IN A RUSSIAN DISINFORMATION CAMPAIGN AND USED OTHER TACTICS TO INTERFERE IN THE INVESTIGATION.
XI. HUNTER BIDEN’S AND HIS FAMILY’S FINANCIAL TRANSACTIONS WITH UKRAINIAN, RUSSIAN, KAZAKH AND CHINESE NATIONALS RAISE CRIMINAL CONCERNS AND EXTORTION THREATS. XII. CONCLUSION

SENATE REPORT-—VIII. HUNTER BIDEN HAD SECRET SERVICE PROTECTION WHILE ON BURISMA’S BOARD EARNING $80,000 PER MONTH.

The Secret Service did not indicate, as was requested, whether Hunter’s travel was on Air Force One, Air Force Two
or other govt aircraft, or whether unelected Biden family members looking to cash-in, and/or US govt employees,
working for the unelected Hunter, were onboard.

The S/S records were also provided, but were not made public, to Senate Finance Committee Chairman Chuck Grassley and Senate Homeland Security and Governmental Affairs Committee Chairman Ron Johnson in a response to a request the senators sent to Secret Service Director James Murray on February, 2020.

In its cover letter to Grassley and Johnson, which was included in the records we received, the Secret Service said that the senators’ request was time and labor intensive, and they could only provide a limited amount of information by the senators’ imposed turnaround time of February 19.

Given the Burisma-Ukraine-China influence peddling scandals, Hunter Biden’s extensive international travel during the Obama-Biden presidency, including at least 5 trips to China, will certainly raise additional questions.

According to reports, Vice President Joe Biden and Hunter Biden flew on Air Force Two for the official trip to Beijing in December 2013. The public records show Hunter Biden arrived in Tokyo on December 2, 2013, and departed for Beijing two days later.

While it is typical for the families of the president and vice president to travel with them, questions have been raised about whether Hunter Biden used the tax-paid government trip to further his business interests.

NBC reporter Josh Lederman, who was one of four reporters on the December 2013 trip, noted in an October 2, 2019, report that, “What wasn’t known then was that as he accompanied his father to China, Hunter Biden was forming a Chinese private equity fund that associates said at the time was planning to raise big money, including from China.”

Hunter’s global travel is only one of J/W’s inquiries.

During the last year and a half of the Obama administration, Hunter Biden served on the board of Ukrainian energy firm Burisma Holdings while VP Biden was Obama’s point man for exerting US policy on Ukraine.

J/W is seeking records through six lawsuits and dozens of FOIA requests related to Hunter Biden’s dealings with the Ukrainian Burisma Holdings and the Chinese BHR Partners.

.....on “CBS This Morning,” promoting his book, Hunter was asked why he had the pistol:..... “my life was difficult. Hallie had thrown it into a trash can​. A​nd I told her ​you can’t do that. And so she went back​....and then the police​,​ came to help...... someone had picked it out of the trash and they found it within hours. And so that was the end of the story,” he said.

But according to Hunter’s text message sent months later, the Secret Service did get involved. ​“Hallie stole the gun out of my trunk lock box and threw it in a full garbage can at Jansens. Then she told me it was my problem to deal with,” Hunter wrote​ January 2019.​ “Then when the police the FBI the secret service came on the scene she said she took it from me because she was scared I would harm myself due to my drug and alcohol problem and our volatile relationship and that she was afraid for the kids​,” Hunter wrote.

T​he incriminating message was found on a hard drive holding the contents of a laptop Hunter left at a Wilmington repair shop in April 2019. Hunter’s emails also revealed his financial dealings in Ukraine and China, and his father Joe Biden’s apparent involvement. ​

At the time , Joe Biden had no Secret Service detail, yet Hunter traveled the globe and sat on the Burisma board with his own Secret Service protection.

SENATOR TAMMY DUCKWORTH, (Democrat-ILL) hits on whitey: “We absolutely need to look at any type of White supremacists”.......

Okay freepers. Where ever you are, Facebook, Twitter whatever, spread the article and especially the photos far and wide. Force as many people as possible to look at them.

Such a garbage, trash family. Puke.

Pretty thorough article on DM. How about the meth teeth? Too bad we don’t have a justice department. Barr ended up being such a loser.

We have to find this out from non-US sources, the Ministry of Propaganda won’t breathe a word, except maybe to try to debunk it as Russian disinformation.