In a chilling video that’s become popular online, a mountain lion in California has been captured on video watching children while they ride their bikes and play outside.

The predatory cat was captured on video when Timothy Kerrisk noticed a large-sized animal crouching outside his home in Pacifica and peering through his front gate. Kerrisk told KRON4 News that he didn’t realize it was a mountain lion until he tried to scare it off.

“I thought it was somebody’s dog that had gotten into the yard and I was like, “hey get out of here! then it turned and that’s when I was like, ‘oh my god! it’s a mountain lion!'” Timothy explained.

“[The big cat] was watching the kids through the gate right here, and I started yelling at the kids “get inside! get inside!”

After posting his video to YouTube, many people started commenting that the cat was just “hiding” or “misplaced,” however we’ve heard similar stories like this before, and it’s pretty safe to assume this cat knew exactly where it was and what it was doing there.

Kerrisk also said the mountain lion had chased his cat through his yard earlier that same Saturday.

“I know that cat was well fed, and I know that it was definitely hungry because it was going for my cat, then the kids, and then killed a deer up behind my neighbor’s house.”

Another clip captured by Kerrisk’s neighbor, Andrew Mooney’s home surveillance cameras caught another shot of the lion as it was escaping Kerrisk’s yard.

Mooney claimed the mountain lion is the biggest he’s ever seen.

“The width of a 2020 Ford F-150 from nose to tail. It’s the biggest one that I’ve seen. We have a lot of sightings of mountain lions around here, and they all seem to be small bobcat size. This one was well fed,” Mooney said.

The mountain lion has put this whole neighborhood outside of San Francisco on red alert, with many concerned about the safety of their children and pets. Despite the dangers, though, many residents in the neighborhood say they do not want the mountain lion trapped, taken away, or euthanized.

Let’s hope that works out for them.. 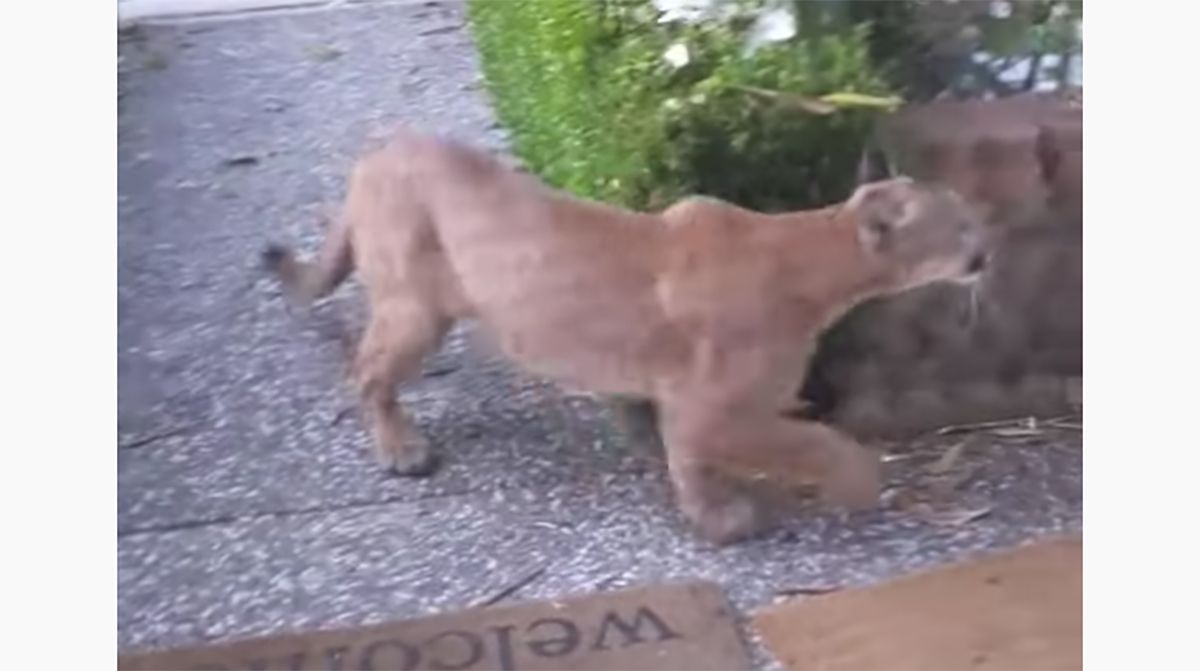 Well, California used to have hunting of such lions but the environmentalist threw a hissy fit so lion hunting was banned in California. Now they have a too many lions problem.

He said it was the width of an F-150. Looks more like the length of a welcome mat. Of course, large predators appear bigger than they actually are, if they’re close enough to you.

The welcome mat is out.

If only poisoned blow darts were legalized...

It's a damn shame. Many trail heads in California have signs warning hikers of the presence of Mountain Lions.

The mountain lion has put this whole neighborhood outside of San Francisco on red alert, with many concerned about the safety of their children and pets. Despite the dangers, though, many residents in the neighborhood say they do not want the mountain lion trapped, taken away, or euthanized.”

And now you know the rest of the story. How a freak like Pelosi keeps getting re-elected.

I hope they all acquire a taste for Democrats.

Houses should have area alert horns like the lightening warning horns that clear golf courses until a permanent solution can be decided.or put them on telephone poles with a 911 activation phone number.

12 posted on 10/05/2020 11:53:31 PM PDT by Varsity Flight (QE 2020. All Quiet on the Western Front)
[ Post Reply | Private Reply | To 11 | View Replies]
To: nickcarraway
A rule of thumb that can be quite useful... If you actually see a mountain lion or wolf, assume the predator is stalking you or another very close by prey. The reason that humans emerged as the top predictor was weapons and not superior strength, sharpest teeth or longest claws.

When I was 18 or so, I drove into the Guadalupe mountains (NM) from the east side for a day hike. The east side is arid and very wild country. I got up the trail a mile or so and heard a loud snarl close by, mountain lion. No weapon more than a pocket knife, dumb. I didn’t see the cat and froze for a moment and then slowly started walking backward then turned and slowly reversed to walk slowly back the way I came. I think the mountain lion was telling me to get off his turf instead of sizing me up for dinner.

My sister will be getting new dogs at our lake house in Oklahoma in the foreseeable future as the two pups there now are way up in years. She was considering downsizing to poofer dogs and we had a talk about the coyotes living in the area. You can hear the coyotes howling at night sometimes. After I got her thinking about the coyotes at night and hawks during the day plus the foxes, she came around to sticking with larger dogs that can take care of themselves.

If they were young kids. it could have been Joe Biden in disguise.

That is one big and strong looking cat. Wonder if Laughing Gas would be an effective deterrent? For those who don’t want to kill the animal. (Satire, nice visual though)

That cat would make a nice area rug in my living room.

On the ranch east of us they Just killed 4 cats, it was a Female and 3- 3/4 grown young ones. Hadn’t seen one for a few years on our place but I do see sign they’ve been around. Last one I seen was a male and he blew out before I could get a shot at him. The Trans Pecos area is seeing allot more cat’s and even have a few bears wandering around. We shoot all Coyotes, Mountain Lions and Feral Hog’s on sight, not something we need or want on the ranch. The cat’s are following the Aoudad Sheep that released down in the Big Bend area and Palo Duro Canyon. They’re migrating all the way into the Permian Basin and Centeral Texas. The like the rough rocky hills like we have on the ranch and so do the cat’s.

That's the best possible outcome. I wish there were mountain lions in my area. The deer population is way out of control.

Seeing the way the human population has increased in California over the past few decades, I'd say California has more of a "too many people problem".