A police officer in Oklahoma was dismayed when he bought a coffee at the local Starbucks on Thanksgiving and noticed the name on the label was “Pig.”

The chief of police the Kiefer, Okla. said one of his officers trekked to Starbucks to get some java for a dispatcher when he received the insulting label.

“What irks me is the absolute and total disrespect for a police officer who, instead of being home with family and enjoying a meal and a football game, is patrolling his little town,” Chief Johnny O’Mara said in a Facebook post that included an image of the “Pig” coffee cup.

Chief O’Mara called the coffee shop and employees there offered to “replace the coffee with a correct label.” But the chief wasn’t buying it.

Last year, when a Starbucks manager asked two black men to leave because they hadn’t purchased anything, the uproar resulted in the manager being disciplined and Starbucks nationwide shutting down for a day for mandatory training.

I wonder if that will happen here? If not, why not?

Not holding my breath...

IMHO the officer should have asked to see the manager, show the cup, and then ask for the names of everyone on duty at the time. When the officer receives the list of names, he then could state that everyone on this list will be the last in line to receive emergency services should the need arise. Got a home invader and you called 9-1-1? If your name is on the list the authorities will be there in about an hour. Injured in a car accident? If your name is on the list you will be the last to be loaded on the ambulance. Other scenarios present.

Non of these responses is a denial of emergency service. It is merely putting supporters of first responders first in line.

Next time you have a problem call Starbucks asshole.

She should have just quit. Would have been easier to find another job that way unless she want to sit on her butt watching reruns of Oprah all day.

85 posted on 11/29/2019 8:41:25 AM PST by Boomer (Epstein didn't kill himself...)
[ Post Reply | Private Reply | To 1 | View Replies]
To: conservative98
“It’s another tiny symptom and a nearly indiscernible shout from a contemptuous, roaring and riotous segment of a misanthropic society that vilifies those who stand for what’s right and glorifies the very people who would usher in the destruction of the social fabric.”

Excellent! You gotta love this police chief. Giving a push back instead of the usual shoulder shrug. We need more of this.

I would FIRE this whole group of employees IF I could not get the truth of WHO did it.

I would make sure that his/her personnel record PERMANENTLY reflected that behavior. In a small town, getting another job with that resume will be tough.

The next thing I would do is buy a coffee maker for the police station along with a few cans of good coffee grounds.

I was worried you may’ve picked up a negative view of the police at some point in the past. Then I read your statement...

“I have a higher opinion of the competency and service-orientation of the officers of my local department than I do of the qualities of a randomly-selected food-service employee. Perhaps that’s unjustified, but it makes me feel better about their driving around armed with guns and authority.”

Sadly, it has come to that.

Thank you. I have always had good experiences with law enforcement personnel. I’ve participated in events to support our local officers. I’m sure you are cool, too!

91 posted on 11/29/2019 9:59:13 AM PST by JWNM
[ Post Reply | Private Reply | To 7 | View Replies]
To: Tax-chick
Those poor Star*ucks employees putting their lives on the line every time they work those dangerous machines and pour that overpriced burned hot liquid! Too bad if they went into debt earning their degree in women's minority gaia worship and can't get a job in their chosen field.

You know it's really simple if you dislike your job or the people you deal with doing it then get the Flock out of that job! This was done by some self entitled ASS that thought they were oh so clever ans know doubt tweeted about it to all their little friends. I bet this ASS will be the first one to bitch and moan about a cop not being around when they get robbed.

So it's all OK because no one chased him down and forced him to by a cup of coffee and be insulted, hot damn, that's one more service I wasn't aware Star*ucks offered along with crappy coffee and service. 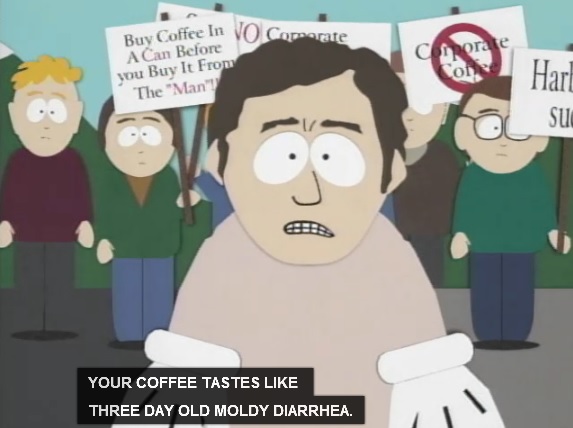 The company I currently work for offers free Starbucks coffee in the canteen. Even though coffee is alluring most mornings, I drink tea.

94 posted on 11/29/2019 10:54:06 AM PST by stevio (Drain the Swamp!)
[ Post Reply | Private Reply | To 10 | View Replies]
To: ByteMercenary
During deployment in Turkey during the '70's Americans living on Incirlik, a NATO base, received the very treatment you described since the base agreement placed Turkish police in virtual control. Worse: whether an American woman was raped by Turks or an American victimized in some other way, the American was always at fault since if they had not been in Turkey then Turks would not have done what they did.

The point of all this is that if Leftist useful idiots continue to destroy the foundations of our culture and alienate decent, hard-working patriots the door will be open to a substantially more lethal invasion than what we've been experiencing on our southern border. Should Muslims seize control of certain areas of America, say the strongholds of Leftism, what will befall them will far exceed what our military and their dependents experienced during the 70's. And who will put their lives on the line to rescue them? The much maligned and hated military? Police? Hard-working patriots?

Starbucks actually does stand-down when it is something they consider important.

Thanks, I vaguely remember that.

97 posted on 11/30/2019 9:41:09 AM PST by Grampa Dave (Nanzi Pelosi Thinks/Says Americans Are Too STUPID To Elect Their President! Time for #DCEXIT!)
[ Post Reply | Private Reply | To 96 | View Replies]
To: Tax-chick
If that is true, doesn’t it support the Starbucks employee’s opinion of police?

Yes. You get it. That type of mentality reminds me of the kind of people who say “well if you feel that way don’t call the cops when you need one”, if you ever offer any type of criticism of any police ever. To which the correct response is, “I will, because it’s still their their job”