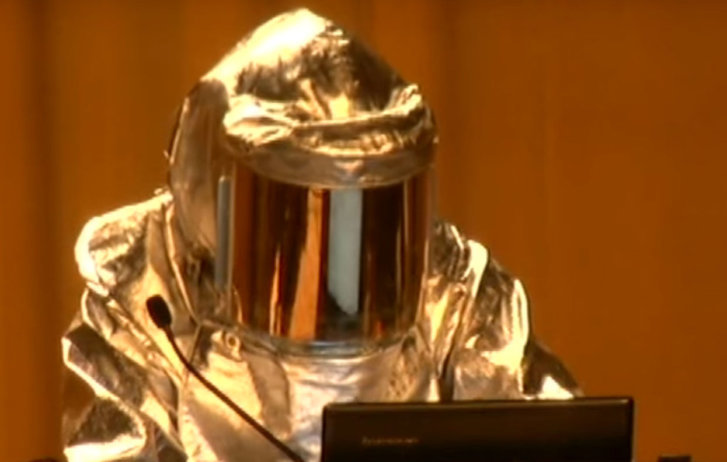 Beckwitt’s attorney, Robert Bonsib has characterized the tunnels as a do-it-yourself version of Cold War-era bomb shelters, saying Beckwitt was concerned about the nuclear threat from North Korea. Bonsib has also called his client an “unusual individual.” Beckwitt addressed a 2016 hacker conference wearing a flame-retardant suit in which he gave a presentation on destroying electronics. (Michail S. via YouTube)

Prosecutors said the man behind a secret tunnel project in Bethesda that turned deadly should be convicted of second-degree murder and involuntary manslaughter because he disregarded public safety.

Daniel Beckwitt, 27, is on trial regarding the tunnels created below the home where he lived.

In opening statements Wednesday, prosecutor Marybeth Ayres said 21-year-old Askia Khafra perished in an electrical fire in September 2017 “because he was stuck in a death trap … created by this defendant.” She repeatedly said that Beckwitt valued “secrecy over safety” for the tunnel project.

Khafra, of Silver Spring, would be blindfolded and driven to what he was told was a site near Lake Anna in Virginia, prosecutors said. He would go into the tunnels for several days at a time, where he had a television, a bed and food. Prosecutors said he was found naked because he used wet wipes for showering, and was in the middle of cleaning himself when he felt he needed to escape. In this Sept. 5, 2018 photo, Dia Khafra, father of Askia Khafra, stands in his Silver Springs, Md., home. Askia Khafra who died last year when a fire broke out at the Bethesda, Md., home where he and a millionaire day trader were digging tunnels for a nuclear bunker.
1 posted on 04/11/2019 4:34:26 AM PDT by COBOL2Java
[ Post Reply | Private Reply | View Replies]
To: COBOL2Java

This excerpt is psychobabble.

How so? Are you familiar with the story?

No ... because this is psychobabble. (too early, more coffee)

Sounds like an accident - was either of these men a civil engineer?