Charles Mutua Mulli, one of the most interesting and inspirational people you’ve probably never heard of, woke up in his family’s hut in a tiny village in Kenya one morning in 1955 and discovered that his parents had taken his brother and fled. Charles had been abandoned. He was 6 years old.

The tale of that child’s experiences over the ensuing 60 years is told in a compelling new documentary titled “Mully” (he later changed the spelling of his surname), directed by the actor/filmmaker Scott Haze. It is a rags-to-riches story of extraordinary dimensions – i.e., Mully literally went from being a homeless beggar on the streets of Nairobi to become one of the wealthiest men in Africa – and it is a parable for our times because, at its core, it is about the power of faith, perseverance and selflessness.

Perhaps ironically, given that Mully himself was abandoned by his family, this film is also a testament to the vital importance of family. Indeed, rather than spend his life bitter and resentful (though he certainly felt those emotions for years after finding himself alone), Mully went on to marry and have seven children with his wife, with whom he still lives today.

Even more pointedly, he went on to physically pick up, bring home, and raise scores of abandoned children from the grimy streets on which he used to beg. Neither the movie nor news stories about Mully say exactly how many of them he informally adopted but, in the film, we get to see the expansion of his home into a compound to accommodate them all – and then get to see as he builds even bigger quarters elsewhere as that considerable compound becomes too small for the task.

It is captivating to watch all of this unfold through interviews, largely with Mully and members of his family, along with re-enactments and home-movie footage taken in real time over the decades depicted in the film.

Hyperbolic as it may sound, there’s even more to this you-couldn’t-make-it-up story: The reason Mully says he turned his own life and that of his family upside-down by feeding, clothing, housing and educating all those girls and boys was an epiphany he had in his late-30s, a realization that saving abandoned children was what God wanted him to do for the rest of his life. And the way he decided to pay the ever-growing bills he incurred as his family grew, until he literally ran out of his millions years later, was to stop working and sell off his fortune, company by company, piece by piece.

All of these narrative elements could easily have come together in a saccharine, self-righteous way that would have left viewers wondering whether all this could really have happened to one man, and whether he really could have been so over-the-top compassionate and generous. But Haze, the director, clearly saw that risk and addressed it by showing restraint in the story-telling, providing enough information and imagery to make a point in a given scene, but not so much that it might feel overwhelming.

One clear example is how Haze represents Mully’s strong belief in God, which ultimately was the reason he changed his life and, as a result, the lives of many thousands of children. While his religiosity is clearly and consistently depicted, it is also just one key aspect of the story and of the man’s character, not the singular focus. To put it another way, his Christianity isn’t presented in a way that might have limited the film’s potential audience; instead, it becomes a thread that’s woven throughout.

In addition to telling an extraordinary story very well, Haze (best known for his portrayal of Lester Ballard in the screen adaptation of Cormac McCarthy’s “Child of God”) has also made a film that is often visually arresting. The combination makes it appealing – and worth watching – at every level. It is being released for a limited run October 3-5. Click here for more information.

This year, Mully Children’s Family – the name of his faith-based NGO – is celebrating its 25th anniversary. It has helped over 10,000 children since its founding. Today, it operates schools, healthcare and agricultural programs, and numerous other leading-edge initiatives. 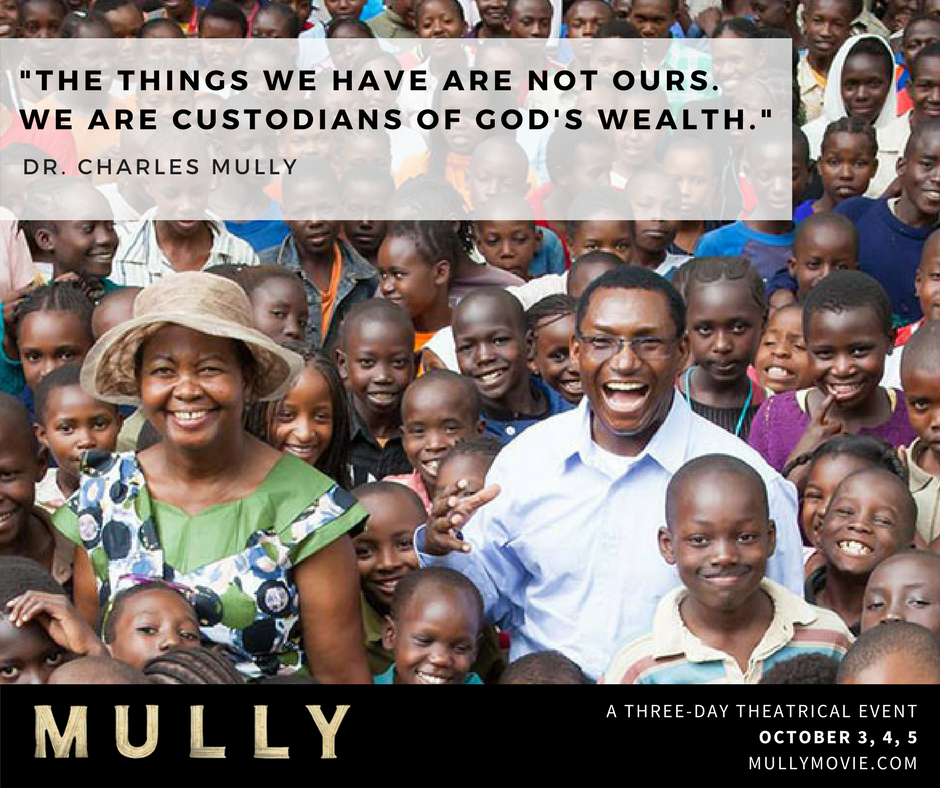 God has given your His greatest gift, His lost children. You have care for them in Jesus’s place.

Heard about this movie from a friend at church. We’re going to see it next Tuesday.
Am really looking forward to seeing it after reading this thread.
Thanks for posting it.

A real hero, not the false-idols we worship on the field and on television.

Haven’t been to a movie in years but plan to see this one.