An avid supporter of the Ferguson police officer who fatally shot 18-year-old Michael Brown has successfully fundraised enough money to erect a #PantsUPdontLOOT billboard in the embattled St. Louis suburb.

Don Alexander, of Brentwood, Tennessee, has surpassed his goal of $3,000 to erect the billboard featuring a phrase intended to mock “hands up, don’t shoot” — a rallying cry used by Ferguson protesters

Good for him. Now, if the community will allow him to purchase the billboard...or, maybe it’s already up? (The pic upthread looks photoshopped, so not sure.)

To the “protestors” this bill board will be kindling.

Ignorance is bliss to them. I look for Al Sharptongue to say it is a racist message on the billboard.

They should have placed “Al Sharpton, pay your taxes” across the bottom.

Hands up!
Face down!

Do as I ask
or you will get a couple rounds

If they can have some group put a bounty on Officer Wilson’s head, we can practice our first amendment rights. After all, it’s instructive and educational and non-violent.

8 posted on 11/19/2014 9:01:50 AM PST by FrdmLvr ("WE ARE ALL OSAMA, 0BAMA!" al-Qaeda terrorists who breached the American compound in Benghazi)
[ Post Reply | Private Reply | To 6 | View Replies]
To: Berlin_Freeper
Check the Twitter comments for #Pantsupdontloot:

Pull Up Your Pants & Don't Loot! 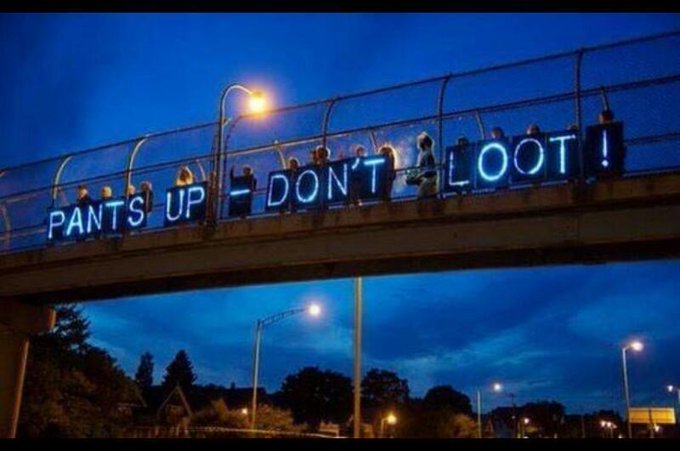 Too late for that message. Sign should read:
“#Hands up, or I’ll SHOOT!”

Another suggestion, “Stop Rioting Or We Open Fire”.

Have you seen this?