I would assume he isn’t going to do the new show in his “Colbert Report” personna so it will be interesting to see if he succeeds. He has a loyal following but how much of that is due to his act?

I haven’t watched the Late Show in 20+ years and I won’t be watching it now so I could care less. Although I hope the Asian American PC activists protest so we get some amusement value from how CBS responds.

Neither of them are funny, but they are PC. It ought to work out well for CBS.

I’d say slightly worse than Letterman. They’re both communist mouthpieces, but Colbert is a good deal media-savvier than Letterman (online and out-of-studio stunts come to mind immediately), so he’d be more effective at pushing an agenda. His challenge will be doing this in front of a wider, presumably more middle-of-the-road audience.

Needless to say, I’m not thrilled. And Colbert may think he’s clever, but I think his act is old and tired. Hopefully most viewers will quickly come to the same conclusion.

I have never seen Colbert and have not watched Letterman for years so it’s a who cares for me.

Indifferent for me. I watch the late night shows as much as I watch any “new entertainment” ... which is not at all.

“And Colbert may think he’s clever, but I think his act is old and tired.”

He will not be doing the Colbert Report ‘schtick’ on The Late Show.

Indifferent. I never watched Letterman and I won’t watch Colbert. The network just traded one leftie for another. I didn’t expect them to do otherwise.

I agree....but this has been on the negotiation table for months. Jon Stewart, I think, asked for a heck of a lot of money. Colbert...maybe half that much (my hunch).

Here’s the thing...his gimmick of I’m-a-Republican-pretender act....has a limit, and won’t fit for the Late Night Show. His numbers will start to fall within six weeks, and after a year...there will be talk of him going away. He might get between two and three years out of this deal.

He might be a hit with college kids....but beyond Chicago and New York? No. 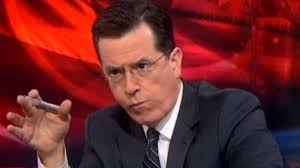 Not the best choice IMO.
Should have wooed Leno.

I have 2 different friends with the same family name and they both pronounce the ‘T’ as in COL-BERT.

It’s reassuring to know that with the selection of Fauxbert, SeeBS still has no idea how to reach the American people.

He has the obvious liberal political views, to fit right in the time slot.

A Commie replacing a Commie..its fitting..So CBS has NO issue hiring a racist who tweeted “Jokes” about Asians..with CBS, its all about politics, Colbert is a radical leftist, so is Letterman..the only ones who will watch Colbert are the usual drones

Colbert has been “impersonating” a conservative talk show host on Comedy Central for years, so no one knows what he is really like. So, people will tune in to see that character and wonder what happened to the guy they used to watch.

You nailed it...this has epic fail written all over it. Conan O’Brien can relax, because he won’t go down as the biggest disaster in the history of late night TV.

A couple of thoughts: first, the quick signing of Colbert indicates that CBS had been talking to him for quite a while; deals of this magnitude don’t get done in less than a week. So Letterman must have told Les Moonves his retirement plans a few months ago, or the network laid out a plan that made his departure inevitable.

Once upon a time, Letterman had the sweetest deal of any late-night host since Johnny Carson. His production company produced “Late Night,” and kept most of the profits. CBS got a relatively small share and fronted most of the production costs. At one point, Letterman’s annual take from the show as $30 million. He also controlled the 12:30 time slot, producing the Late, Late Show and selecting the host for that program.

In recent years, CBS has taken a much greater equity stake in the show (ad split is 50/50, if I’m not mistaken), and the network has taken control of the Late, Late Show. It was disclosed a few days ago that Craig Ferguson is negotiating a new contract with CBS, and not Letterman’s production company. At best, Ferguson gets a pay cut; at worst, he loses the show, since Jimmy Fallon beat him almost every night and Seth Meyers is continuing that trend.

With the financial changes, Letterman’s take from the show is around $20 million a year. That still puts him firmly in the 1% group he routinely mocks, but it’s a big drop from his old pay scale. And Dave knew the hand-writing was on the wall when he asked for only a one-year contract extension and CBS wasted no time in accepting the offer. If the network envisioned Letterman as a long-term presence, they would have offered a muti-year contract.

Secondly, Colbert may get some sort of production deal out of CBS, but it’s clear he will never get the dollars—or clout—that Letterman had at the network. In fact, CBS is probably looking forward to making more money in the time slot. Colbert will be hard-pressed to equal Letterman’s ratings, but with a lower salary for the host (and CBS controlling the lion’s share of the profits), they will actually improve the bottom line, even if their replacement delivers a smaller audience.

So, Colbert will be a long-term disaster; he could pull a Katie Couric and linger for five years before they pull the plug. With CBS dominating prime time, the ad revenue from late night isn’t as important. One reason Conan got the hook so quickly at NBC is their primetime line-up was a disaster and they couldn’t afford the drain that O’Brien’s “Tonight Show” was placing on their revenues.

Stewart’s no fool...he’s already getting a paycheck that’s equal to that of Jimmy Fallon or David Letterman, on a cable show with much lower expectations (in terms of viewership). It’s also likely that Stewart would demand a greater share of the profits and some control over the 12:30 time slot, akin to what Letterman and Carson had in the prime. CBS will never grant that type of control again.

Meanwhile, Stewart can stay on Comedy Central, retain his title of critical darling and stay there as long as he wants (even if only he draws only 1.5 million viewers a night). Colbert will attract about 3 million a night on CBS, and get hammered for not closing the gap with Jimmy Fallon.