According to a 2009 study by Internet security firm Proofpoint, 8 percent of companies with more than 1,000 employees have fired someone for social media actions -- a figure that is double what was reported in 2008. Yet it probably comes as no surprise that Facebook firings are on the rise. Cases of employers firing employees for social media slip-ups have been consistent in the news over the past few years.

Just in case you need a refresher of what not to say online, here's a timeline of 12 ridiculous examples of how Facebook can get you fired.

1. Nov. 4, 2008: New England Patriots cheerleader Caitlin Davis was cut from the squad over controversial pictures that were posted on her Facebook page. Davis, then 18, was at a Halloween party when she posed for photos with a passed-out man who was covered in graffiti, including swastikas, anti-Semitic remarks and profanity. Davis was fired from the squad after the pictures appeared on various websites and caught the attention of the Patriot's management team. She had been the youngest cheerleader ever to make an NFL squad.

All of these gloom-and-doom stories omit a crucial item.

If (and admittedly it’s a big if) you have set your privacy controls properly then your status, posts, etc. should be visible only to people on your friends list i.e. those you have approved to see such material.

The point is that offended companies or bosses usually need help to discover anything controversial.

All 12 of these people probably aren’t bright enough to turn on a light switch.

That said, never write anything unkind or hateful on Facebook...nor anywhere else on the web. When you send it, it’s out there forever.

Sorry. My company only rents my *ss for 8 hours a day. As long as I don’t post FROM work, (which I can’t, due to our “overzealous” lockdown policy), or mention my company on a “social” website, they have no say in what I do on MY time & MY dime. If they want the option of 24/7, I’m gonna need two more paychecks from them every payday on top of the one I get now.

4 posted on 09/01/2010 5:56:28 AM PDT by rickb308 (Muslims need to check with Native Americans & ask how that whole cowboys & indians thing worked out.)
[ Post Reply | Private Reply | To 3 | View Replies]
To: RexBeach
I agree. Consider this economic Darwinism—weeding out the idiots and making the work force more productive. The reason being that anyone stupid enough to write nasty things about their employer or boss or co-worker on a social media website is probably too stupid to work.

And in a larger sense, I can't see why anyone would write nasty things about private individuals on any website. First, you have potential liability for slander. Second, its just not decent.

And that would never happen here on FR!

I think the 6th was an overreaction by her employer.

Several of those, are questionable.

What in the world, don’t their bosses have a job to do?

My daughter posts under an alias on FB. She doesn’t want her strongly conservative opinions to cause her to lose her job here in liberal Madistan, WI.

Stacy Snyder claims she was denied her teaching degree from Millersville University due to a photo of her, with the caption “drunken pirate”, being discovered on the social networking site Myspace. The School of Education Dean, Jane S. Bray, apparently
felt the photo was “promoting underage drinking”; and thus, denied her BS teaching degree and certificate. http://www.associatedcontent.com/article/229538/drunk_pirates_on_myspace_cannot_be.html

The photo itself is tame. It is a simple headshot of a girl drinking from a yellow plastic cup, wearing a pirates hat.

I agree, 6 stood out. The vast majority of my over-21 FB friends have a picture of themselves with an adult beverage somewhere on their profile. I’d hate to think that was a firing offense. Several other examples were questionable. Maybe not the best judgement, but I wouldn’t fire somebody for it unless it was part of a pattern.

My employer has a stated policy that we can’t say anything negative about the company or our customers, on social media sites, so I don’t discuss work at all. My profile doesn’t even mention the name of my company. OTOH one of my friends works for a major corporation and is always talking about how much work sucks. I guess that company doesn’t care. 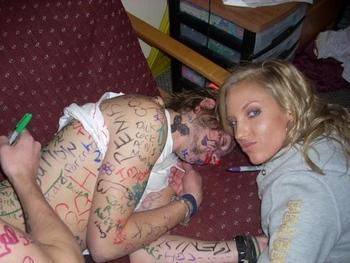 Caitlin Davis alone and with a passed out drunk. Perhaps the Patriots could have forgiven one offense.