WASHINGTON — Not everyone thinks imitation is the best form of flattery.

In fact, U.S. Rep. Alan Grayson of Orlando took such offense at a parody website aimed at unseating him that the freshman Democrat has asked that U.S. Attorney General Eric Holder investigate the Lake County activist who started the anti-Grayson website “mycongressmanisnuts.com.”

Specifically, Grayson accuses Republican activist Angie Langley of lying to federal elections. His four-page complaint highlights the fact that the Clermont resident lives outside his district, but that Langley still uses the term “my” in “mycongressmanisnuts.com.”

“Ms. Langley has deliberately masqueraded as a constituent of mine, in order to try to create the false appearance that she speaks for constituents who don’t support me,” writes Grayson. “[She] has chosen a name for her committee that is utterly tasteless and juvenile.”

Grayson’s office did not respond with comment other than to confirm the letter exists — including its request that Langley be fined and “imprisoned for five years.”

If Holder goes after Miss Langley, all she needs to do is show up for court in black face and a New Black Panthers beret while wielding a nightstick....”Case dismissed!”

My friends the end of the big experiment is over. The USA is dead. Now we have them and us.

Trying to get people imprisoned when they have committed no crime makes it official. Rep. Alan Grayson is a fascist.

Trying to get people imprisoned when they have committed no crime makes it official. Rep. Alan Grayson is a fascist.

HEY FLORIDA DUMBASSES!!! Vote this imbecile out!!! What the Fcck is wrong with you??

Great minds and all that....

Grayson quotes from the NYTimes: 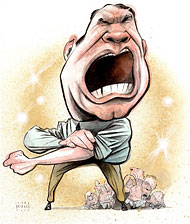 “If you get sick, America, the Republicans’ health care plan is this: Die quickly.” Then, appearing on MSNBC, he said of former Vice President Dick Cheney: “I have trouble listening to what he says sometimes because of the blood that drips from his teeth while he’s talking.” Finally, a radio interview surfaced in which he had called a female adviser to the Federal Reserve chairman “a K Street whore” — a reference to her former job as a Washington lobbyist.

The Orlando Weekly appears to be one of those free weekly papers that runs local stories along with music-film-food listings and classifieds.

In the Summer of '08 they ran a piece profiling all the candidates and endorsed Grayson.

Grayson immediately responds by email. To say "thanks for the highly complimentary profile and endorsement," right? Nope. Not (as the paper calls him) "The Incredible Sulk". Instead Grayson gets all snarky with the author, arguing over trivial semantics and demanding retractions (one of which was agreed to). He was such a D*ck about it that the newspaper RETRACTED IT'S ENDORSEMENT!

You can't make this stuff up!

The paper published the email exchange, (Caution: F-bombs in the article)

WHY we rescinded our Grayson endorsement
http://www.orlandoweekly.com/blog/default.asp?perm=1439

90 posted on 12/19/2009 4:10:36 AM PST by Stultis (Oceania has always been at war with Eastasia; Democrats always opposed waterboarding as torture)
[ Post Reply | Private Reply | To 1 | View Replies]
To: Justaham
In fact, U.S. Rep. Alan Grayson of Orlando took such offense at a parody website aimed at unseating him that the freshman Democrat has asked that U.S. Attorney General Eric Holder investigate the Lake County activist who started the anti-Grayson website “mycongressmanisnuts.com.”

The hell of it is that Holder just might do it. And I'm dead serious.

Your Congressman may be nuts if......

I’m not. However, good idea you could be president or leader of that districts efforts. He should divide it up by district so we have an activist represented in each district. Not that it will satisfy Congressman Crazys’ complaints.

In my experience, people like her abuse the First Amendment, and inexorably link it to the Second Amendment!

I know that all of you on this site will join me in demanding that our AG, Eric Holder, inmmediately drop the defense of Barack Hussein Obama, Jr. in the Writ of Quo Warranto eligibility cases now coming to the Federal District Court in Washington,DC. He must, must I say, concentrate all of his efforts on this Langley woman!

She has caused this fine man from the Bronx a severe loss of self-esteem, which as you know, the Republicans have removed as an insured condition from The Leader's Health Care Plan for the little people.

Give Langley a pass on this outrageous behavior? Attorney General Holder, I say, "NO!" . . Pass, indeed. Who the hell does Langley think she is, a Puerto Rican Terrorist? One of those people who deserved the pardons you OK'd for WJBC?