(CBS News) BUFFALO, N.Y. -- He was an 18-year-old Marine headed to war. She was an attractive young woman sending him off with pictures and lingerie.

Or so each one thought.

In reality, they were two middle-aged people carrying on an Internet fantasy based on seemingly harmless lies.

When a truthful 22-year-old was drawn in, authorities say, their cyber-escape turned deadly.

"When you're on the Internet talking, you haven't got a clue who that is on the other end," Sheriff's Lt. Ron Kenyon said. "You don't have a clue."

"We hear a lot about protecting children online but much of that advice should apply to adults as well. Regardless of their age, Internet users need to realize that people may not be who they claim to be. People should be extremely careful about giving out personal information or arranging personal meeting with those they meet online.

"The only way you can get physically hurt from an online relationship is if the person knows who you are and where to find you. Don’t give out that information and don’t meet up with someone unless it’s in a public place with lots of other people around,'' said Magid. "And even then, be extremely careful."

When Brian Barrett was shot to death Sept. 15 outside the factory where he worked to help pay for college, investigators and his family were stumped.

Barrett, 22, was an aspiring teacher, an accomplished high school athlete who had coached Little League baseball all summer and helped his father coach soccer. Those who knew the Buffalo State College student described him as quiet and unassuming.

He had clearly been targeted. Barrett was shot three times at close range in the neck and left arm after climbing into his truck about 10 p.m. at the end of a shift at Dynabrade Corp. in Clarence, 20 miles outside of Buffalo. His body was found two days later when a co-worker spotted his pickup truck in an isolated part of the company parking lot.

"He was just a nice kid, a gentleman," said Starpoint High School Athletic Director Tom Sarkovics, who was Barrett's baseball coach for two years. "I don't think anybody could say a bad thing about him."

On Nov. 27, Barrett's 47-year-old co-worker and friend, Thomas Montgomery, was charged with Barrett's murder. The motive, investigators said, was jealousy over Barrett's budding Internet relationship with the same 18-year-old woman Montgomery had been wooing since the previous year.

What neither man knew was that the woman was really a 40-something West Virginia mother using her daughter's identity to attract Internet suitors. Cyberspace, it appeared, was enough for her, and it was a near certainty she would never have met either man.

"The game would have been over at that point and time for sure," Kenyon said.

When Montgomery began chatting with the woman in 2005, the former Marine portrayed himself as perhaps a previous version of himself — a young Marine preparing for deployment to Iraq, Assistant District Attorney Ken Case said.

For a time, they communicated strictly through chat rooms and e-mail.

Then the woman began sending gifts to Montgomery's home, Case said. Pictures of the woman's daughter, lingerie and a set of custom-made dog tags arrived at the pale yellow suburban house that Montgomery shared with his wife and two teenage children.

Montgomery's wife intercepted one of the packages, Case said. She wrote back to the woman at the return address, and included a family portrait to make her point.

The West Virginia woman — whom authorities will not identify — remembered a friend named Brian that Montgomery had mentioned. She recalled enough of his computer screen name to contact Barrett to ask him about what Montgomery's wife had told her.

Soon Barrett was in regular contact with the woman. Despite knowing the truth about Montgomery, the woman remained in contact with him as well, Case said.

The woman made no secret of the fact she was chatting with Barrett, Case said, and Barrett talked about the relationship at work. Montgomery, authorities say, became jealous.

Sheriff's investigators believe Barrett's killer wore camouflage and a ski mask when he approached Barrett in the parking lot with a .30-caliber rifle and fired at close range.

Montgomery is being held without bail after pleading not guilty to second-degree murder. Tall and with thinning hair, glasses and a mustache, he said nothing at a procedural court appearance on Jan. 10. He is due back in court in June.

His wife, whom authorities have not named, has begun divorce proceedings, Case said. She did not respond to a message left at Montgomery's home in suburban Cheektowaga or answer a reporter's knock there.

"I'm hoping that this case will make people think twice about what they do online and what their actions can cause in the long run," she said.

Where is the surprise here? 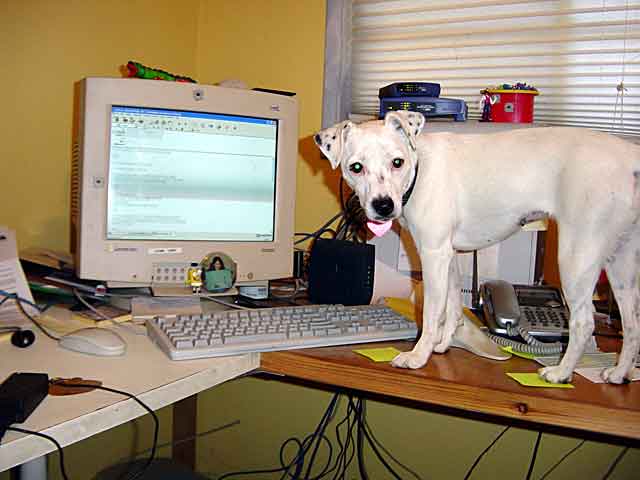 My truth is that I am a canine-American.

I hope Barret's family sues Miss Internet in civil court for contributing to his wrongful death.

And I feel really sorry for the shooter's wife. Bad enough that he's virtually unfaithful, he's also a fool and now a murderer. They ought put him in old sparky and let her pull the switch.

Was this on aol?