Derek Lowe, the ex-Red Sox hurler who was the hero of last year's ALCS and the World Series, has abandoned his heartbroken wife and kids and moved in with a TV reporter who covers his new team, the Los Angeles Dodgers.

That's according to Trinka Lowe, Derek's wife of seven years and the mother of their three kids, who said her husband has left her for Fox Sports Net's Carolyn Hughes.

``This is definitely the worst time of my life,'' Trinka told the Track. ``I don't even know how to describe it. I still love him. He's still the father of our children. But I don't want this to be glamorized like some other relationships that didn't start out so well. I don't want this to be portrayed as `They were there for each other when his marriage fell apart.' That's not true. The marriage fell apart because of this other person.''

Trinka said she made FSN aware of the relationship and a representative promised to investigate. A spokesman for the network said yesterday that Hughes, who hosts the FSN pregame show, ``Dodgers Dugout,'' has been taken off the beat pending the outcome of that inquiry.

``As soon as we were made aware by Mrs. Lowe that a potential problem existed we removed Carolyn from covering the Dodgers,'' Lou D'Ermilio told us. ``At present we're investigating to determine whether a conflict of interest did exist and beyond that we can't comment on a personnel issue.''

Hughes did not return our calls. For that matter, neither did Lowe's agent, Scott Boras. And Dodgers spokesman John Olguin declined to comment on the mound man's marital mess.

``A player's home life is personal,'' he said, ``and as such the Dodgers will not comment.''

But Trinka, who still lives in Fort Myers, Fla., said she knew something was wrong with her marriage as soon as she returned to the Beverly Hills home she and Derek bought after he was signed by the Dodgers.

``I went out to L.A. when the kids finished school, just like I used to do every year when we were in Boston,'' Trinka said. ``But when I got there I felt like something was a little odd. Of course, I hadn't seen him in a while and it usually takes him a few days to adjust to me and the kids.

``Anyway, he left on a road trip and he called me from the road and said, `I'm not happy and I can't do this anymore.' It was right out of the blue. I said `Whatever the problems are let's work it out. I will do anything, let's go to counseling, we have these kids.' And he said, `I don't want to work it out. I'm through.' ''

Trinka, who was with Derek for 11 years, said her hubby's reluctance to try to repair the relationship made her think that ``there was someone else involved.''

``He told me he wanted me gone when he got back from the next road trip,'' she said.

Trinka said she told her husband that she was going to wait four days to leave because she had invited friends from Boston and her brother to visit.

``So when he got back from the trip he went and moved in with her,'' she said.

Trinka said she knows this because when Derek came over to see the kids, he was driving Hughes' car, and when he left, Trinka had him followed.

Trinka said she went to Hughes' Manhattan Beach apartment and confronted her but the sports reporter denied that there was anything improper going on. She insisted that she and Lowe were ``just friends,'' Trinka said.

``They deny the relationship. She told me Derek sleeps on her couch and that she does this for all her friends.''

But Trinka did some snooping and found Hughes' number in Derek's cell phone under the name ``Jeff.'' She said she also knows that her hubby chartered a private jet to take him and his galpal to the All-Star Game in Detroit. And if she needed any more proof, incriminating pictures of the pair appeared on an L.A.-based media critic's Web site earlier this week, pictures that Trinka insists she knows nothing about

Ron Fineman, who broke the news of the Lowes' marital mess, declined to say where he got the photos. Derek Lowe is said to be livid about them.

Hughes is currently in the process of divorcing her husband, restaurant manager Tommy Samboni. Their marital problems began, Trinka said, when Hughes informed her hubby that she met someone in spring training and that she ``no longer trusted herself on the road.''

Trinka has taken the couple's three children – Phillip, 16, her son by a previous relationship who Lowe adopted, Taylor, 5, and Tanner, 1 – and moved back to Florida. She said Lowe has rented a house two blocks from Hughes' place and that he informed her that he will be spending the off-season in California.

``I guess he won't be seeing too much of his children in Fort Myers,'' she said. ``And I expect to be served with divorce papers in the next couple of weeks. I hope that doesn't happen, but I've tried to prepare myself.''

Trinka said she knows her husband was unhappy and under a lot of stress to prove himself after the Red Sox let him go and the Dodgers signed him.

``It was a huge letdown for him. He didn't want to leave Boston. He loved it, but I don't think there's any acceptable reason for this happening.''

She said she knows that ``lying and cheating are relatively prevalent'' in baseball but she believes Derek might not have left her if they were still in the Hub.

Nonetheless, Trinka said she is speaking out because she doesn't want Derek's relationship ``glamorized'' like similar situations have been.

(Lowe's former teammate Johnny Damon and his current wife, Michelle, have said they met after Damon's marriage to first wife, Angie, went on the rocks. Angie begs to differ.)

``I don't want this portrayed as some sweet romance between the baseball player and the sports reporter, that his marriage broke up and he fell into her arms,'' Trinka said. ``The truth is that he chose to do that while he was still married.''

File Under: How Lowe Can You Go?

TOPICS: Miscellaneous
KEYWORDS: bostonherald; bostonredsox; dereklowe; divorce; infidelity; losangelesdodgers; trinkalowe Navigation: use the links below to view more comments.
first 1-20, 21-29 next last
He pitched the winning games in the ALDS, ALCS, and World Series for the Sox but it looks like D-Lowe threw a curveball to his wife. (Trinka, by the way, was one of several "Red Sox wives", like Karen Varitek and Shonda Schilling, who did charity work like selling cookbooks, canned food drives, etc.)

>>``He told me he wanted me gone when he got back from the next road trip,'' she said.

How nice of you, Derek. Also nice to not come out and tell the wife the real reason he's leaving.

>>But Trinka did some snooping and found Hughes' number in Derek's cell phone under the name ``Jeff.''

What was that country song, "Your 'nobody' called today/She hung up when I asked her name/Well I wonder if she thinks she's being clever..."

Naming your boy Tanner has got to bring you bad luck.

Is this a case of him putting on 20 pounds in the off season while she put on 100? 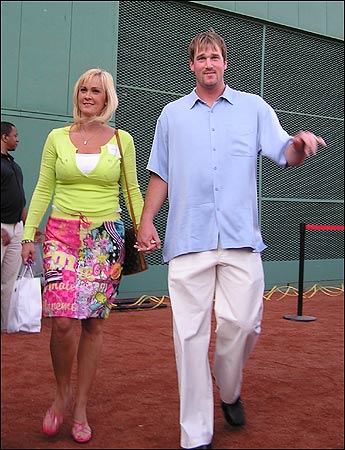 Thank goodness! I thought he was using steroids or something.

It's the 7 year ich. I can definately see how selfishness becomes D-Lowe. It's amazing too see how often this happens.

>>Thank goodness! I thought he was using steroids or something.

>>He was awful last year.

I used to call him Derek B-Lowe because he'd always blow
saves (no rude puns, please...) yep. she hosts, or at least she did until the affair broke, the Dodgers Pregame show, "Dodger Dugout".

Yup! I was just having fun with the fact that a female fox is known as a "vixen" :)

I obviously that until you 'splained it.