Charlotte, NC — In a new bombshell report, US State Department Investigators found that the Chinese Communist Party was preparing for World War 3 utilizing biological weapons, including coronaviruses, starting in 2015. The dossier from the People’s Liberation Army outlined how biological weapons would be the preferred method for fighting in a potential world war.

The document outlined the manipulation that the Chinese government was proposing of viruses, the potential release methods for such viruses, and the impact that such a virus would have on medical systems. The reports were originally covered by The Australian. Details such as days of week, times of day, and more were covered.

The document shares information that many have suggested in the US over the past year since the coronavirus pandemic began. Mainstream media and the radical left were critical of former President Donald Trump and conservatives who suggested that China is responsible and that the virus was potentially released from the Wuhan lab. So far, the report has received no coverage from mainstream US media.

Details continue to emerge, but reports are that scientists were manipulating viruses in ways never before seen. In addition to biological weapons, the dossier also mentions genetic weapons that were being researched. Research began as recently as 2015 in preparation for what China was referring to as World War 3.

China believed that biological and genetic warfare would be the key to victory in a potential upcoming WW3. In fact, they called them “the core weapon for victory” in the dossier.

The Australian interviewed one strategic policy expert who had significant concerns with China’s research into biological weapons...

Nuke them from space before it is too late, albeit it probably already is.

These bastards are acting like a bombshell exploded but in reality they knew it all along. They could have released this information when Trump was president and accuse of the China virus instead they called Trump a racist etc. etc. for bringing in the heat on Xi! Now that the fake president is in the fake office they’re going to try to do everything in their power to make it look like they just found the information to benefit Biden and his administration. Screw the fake media🤢!

There is no question in my mind that the CCP purposely released the covid bomb and that the usurping JoeBama regime was in on it because it served two very important purposes:
Forcing mail in ballots
Complete control over Americans
The only people allowed to do what they want with impunity are big business, antifa and BLM. Well, and the Democrats can do exactly as they please while the neutered RINOs sit and protect their secrets.
Cheney isn’t even a RINO, she’s a demoncrat.

The fact that they built a hospital in the matter of days, and where welding shut doors of people suspected of being infected makes me wonder why they were so worried

That was all show to terrify the rest of the world into locking down and giving the CCP free reign.

There were also clips of people collapsing in the street and bodies lying around everywhere.

You shouldn’t believe everything you see on the Interwebs or the boob tube.

I knot it’s hard, but you really need to try.

I have long been saying it was part of their C.B.R. long term strategy.

You are 100% correct. Biden and his son Hunter, strutted out of China with one and one half billion dollars in their pockets. IMHO...Biden colluded with the Chinese...telling them they had to attack the USA with a bio attack so that Biden and his Democrats could get rid of Trump!!! Biden in return told the Chinese he would work with them to bring both Trump and America down!!! The Chinese agreed to consort with him and handed him & son Duncan, that nice big bad package of cash!!! Sadly, the American people are not too bright!!!

Now, today, we have had a disabling attack on our major pipe line system....gas prices will go sky high and the USA economy will collapse!!! Sad days ahead for the once great USA!!! Meanwhile Americans are asleep at the wheel!!! God bless (Not) the illegal elected POTUS, Democrat, Joe Biden!!!

They even own the White Hut.

It will be hard, but you can do it.

No s&#t Sherlock- the question is NOW WHAT?

“In a new bombshell report, US State Department Investigators ...”

Isn’t this supposed to be RACIST??? Shouldn’t these folks at the US State Department be BANNED??

If that the way it worked for President Trump, it should work that way for these folks, right??

19 posted on 05/08/2021 10:31:19 AM PDT by Salamander (Salamander has barbaric tendencies.../Gundog)
[ Post Reply | Private Reply | To 4 | View Replies]
To: RoseofTexas; ransomnote
These bastards are acting like a bombshell exploded but in reality they knew it all along. They could have released this information when Trump was president and accuse of the China virus instead they called Trump a racist etc. etc. for bringing in the heat on Xi! Now that the fake president is in the fake office they’re going to try to do everything in their power to make it look like they just found the information to benefit Biden and his administration. Screw the fake media🤢!

Trump has always been aware. 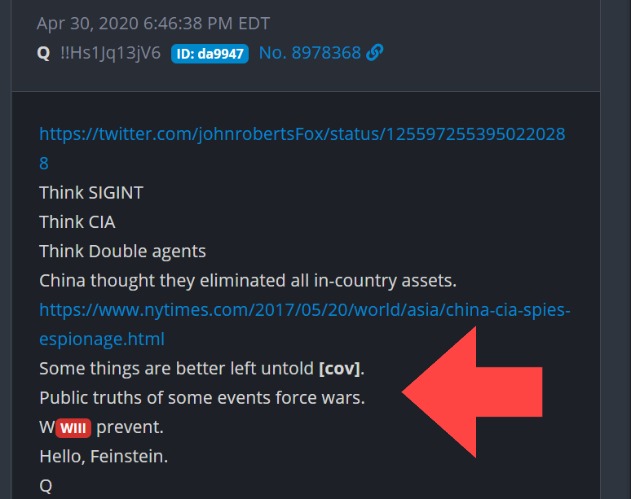 Why do you think the heathen Chinee so blatantly stole our election?