Meanwhile, with no major mainstream media reporting on it, it may be too late to rescue Canada from heavy Chinese influence, but not too late for America to understand the risk to them coming from the oh-so-polite country next door

America’s deadliest enemies are not all in the Middle East, they have for decades been operating with impunity from the country right next door.

Patently ignored by a long succession of American presidents, Canada, whose people are identified as polite to a fault, shares the longest undefended border in the world with the USA.

While its inhabitants are, by and large, polite, easy going, and apathetic in voter turnout, their Liberal governments have been playing House with the People’s Republic of China for a very long time.

We will need lots of rope and trees someday.

Let’s not forget they let the Confederates launch attacks into New England during the Civil War! 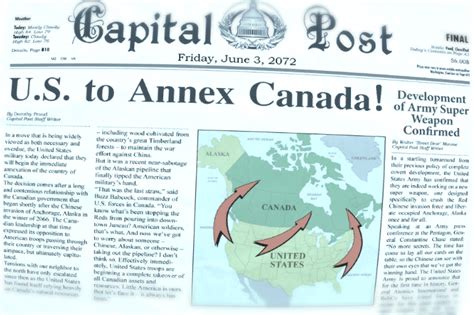 From what I’ve seen in the news lately Canada is mostly a lost cause. Best that we consider them a mildly hostile foreign power at best.

6 posted on 04/14/2021 7:58:54 PM PDT by rllngrk33 (It seems the soap box and ballot box have failed, it might be time for the bullet box.)
[ Post Reply | Private Reply | To 1 | View Replies]
To: Farcesensitive
After we clean up America we need to liberate Canada and dump all of our leftists in Mexico.

Hey what did Mexico do to deserve our leftists? I would prefer corrupt Mexico over statist Canada any day.

We will need lots of rope and trees someday very soon.

Mexico sent us millions of illegals to steal our jobs and vote for Demoncrats.

They are also already moving towards becoming a Narco-Anarchy or a Communist dictatorship.

We allowed it to happened. Just like the Romans invited the Barbarians to serve in the Roman Army.

At this point there may well be more Communist Chinese Nationals in
Canada, than Canadian Military.

Neither they, nor we, have a government or a press that would tell us, in
any case.

That doesn’t mean their encouragement of it gets a pass.

I say we should return the favor.

There is a FReepathon going on!