Former vice president Joe Biden said he’s a “proud Democrat,” but if he’s elected president he will serve all Americans, regardless of their party affiliation, those who voted for him and those who supported President Donald Trump.

“One America,” he told a small crowd Monday night at Union Terminal.

He was critical of how Trump has handled the coronavirus and the way he has divided the country through his racial comments.

If elected, Biden said he will provide “heal and hope” for Americans.

“That’s the president’s job,” he said.

More than two hours before Biden was scheduled to speak Monday night, his supporters and those supporting Trump stood on opposite street corners.

Both waved signs for their presidential candidate and they agreed Ohio voters could likely determine who wins the election next month.

As she spoke, across the street, more than 50 Trump supporters across the street chanted: “Four more years.” Truck drivers and Cincinnati police officers honked their horns, apparently in support of Trump.

NBC’s Marianna Sotomayor was on the scene Monday when a group of Trump supporters interrupted former VP Joe Biden campaigning in Toledo, Ohio on Monday.

Video below: (Video uploaded on the site, can't find a link)

The sleep up was ignored by the mainstream media but the internet never forgets.

The commander-in-chief skewered the poor attendance at Biden’s rally, although the former veep’s supporters said his campaign had deliberately limited the crowd size to stop the potential spread of COVID-19.

“Almost nobody showed up to the Sleepy Joe Biden ‘Rally’ in Ohio. The reporting and polls are a Media Con Job – Fake News,” Trump tweeted on Monday afternoon.

“We have far more support and enthusiasm than even in 2016. November 3rd. will be a great day for America!!!” he went on.

In a subsequent tweet, the president poked fun at Biden’s mask-wearing, writing: “So Biden is coughing and hacking and playing ‘fingers’ with his mask, all over the place, and the Fake News doesn’t want to even think about discussing it.”

Only Joe and his supporters would believe this. Considering what President Trump has done for Israel, and that his Son-in-Law, and Daughter are Jewish I don’t think the President would stand for what Joe claims.

So, Biden equates the American flag with the Nazi flag. Got it.

That’s one reason I honestly can not imagine voting for this guy, even if he didn’t have dementia.

"Well, I tell you what. I uh — my dad was a modelbile man. I got through uh — school, and we got through uhhh — being ableduleadt after we lost a job up in Scranton, Pennsylvania, eyadda move down to Delaware Because uh, by cause it’s Ellen General Motors products— and so uhhh, I’ve known and my state — used to have the largest percentage of auto workers of any state in the nation,” Biden said.

The dems took full advantage of the virus to make us miserable so that we would vote Trump out. They wanted us unhappy so that they could blame Trump and get their man/woman/mouse elected.

Unfortunately, their knight in shining armour riding in on a white horse is senile and half-asleep. He ain’t gonna save us! 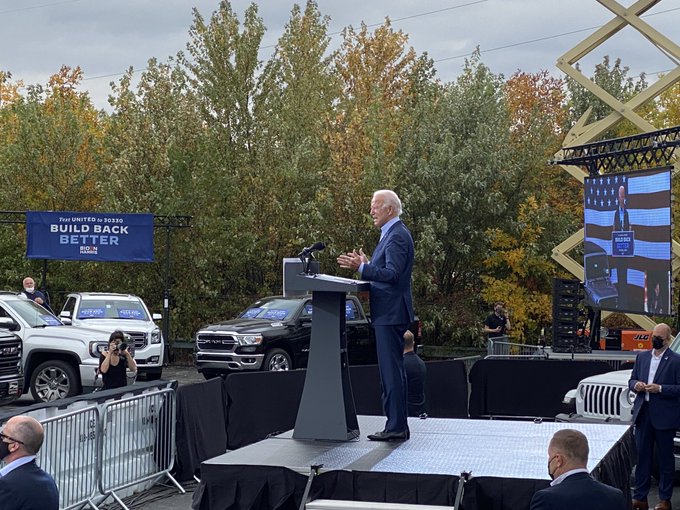 It’s true. We got a big cardboard cutout of Ernst Rohm and waived it at Joe Biden because....reasons....

Under Biden-Harris there will be one America, after all the Trump supporters are EXPUNGED.

11 posted on 10/13/2020 5:41:14 AM PDT by Brooklyn Attitude (I'm Joe Biden and they tell me I approve this message.)
[ Post Reply | Private Reply | To 1 | View Replies]
To: USA Conservative
The sleep up was ignored by the mainstream media but the internet never forgets.

QWERTY ergo typo. But this one is funny!

Joe, those are American flags in case you forgot that too.

““One America,” he told a small crowd Monday night at Union Terminal.” A large crowd for biden is 5 people, so a small crowd must be two people.

14 posted on 10/13/2020 5:49:41 AM PDT by silent majority rising
[ Post Reply | Private Reply | To 1 | View Replies]
To: USA Conservative
The chants “four more years” confused Biden and as he was describing Trump supporters he accused the of waving “Nazi Fags”

They waved images of Ernst Röhm?

I'm reasonably sure opening a box of cereal could confuse Biden. As is typical of people suffering from dementia, he has his good days and he has bad days. I think we saw a chemically-induced good day at the debate. I think we are more and more seeing bad days as Biden slides further into the darkness.

We know Joe wouldn't last 6 months in office. My guess is that within 2 to 3 months he'd be shuttled aside. Really just depends on how much of a fight his wife puts up wanting to be First Lady.

The real problem isn't that Joe lacks the mental capacity to discharge the duties of the office. The real problem is the only way Joe 'n Ho win is with fraud. The difference in voter enthusiasm between supporters of President Trump and backers of slow Joe and the Ho is off the charts. The polling numbers reporting anything different are pure fantasy. The only way Joe 'n Ho win is through fraud that will have to be so extensive, so obvious, that it will literally put Trump supporters up in arms. They could very well touch off something that would make blm/antifa look like a Church picnic.

I watched a clip of his speech and he was clearly agitated by the Trump supporters on the streets screaming and yelling, and there was nothing he could do about it. LOL!!!!!