A Few Bright Spots: Steelers Player Alejandro Villanueva Tapes Name of Fallen Veteran on Helmet Over BLM Approved Name ( And he's not the only one )
Red State ^ | 09/16/2020 | Brandon Morse 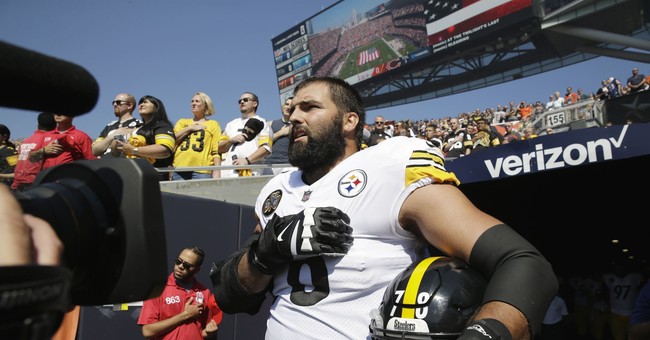 The NFL is rife with social justice messaging to the point of being unwatchable, but there are a few bright spots. Some players refuse to cave to the Black Lives Matter domination over the league.

One such player is Steelers offensive lineman Alejandro Villanueva.

According to CBS News, the Steelers were directed to wear the name of Antwon Rose, Jr. on the back of their helmets after the team took a vote. Rose was a 17-year-old who was shot by police in the back as he ran away from a vehicle he was a passenger in. Police had pulled the car over due to possibly being involved in a drive-by shooting.

Villanueva, who apparently disagreed with the vote, decided he wouldn’t put Rose’s name on the back of his helmet, however. Writing on it himself, he taped over Rose’s name and wrote the name of U.S. military veteran Alwyn Cashe, a soldier who had died in Iraq while on duty when an IED went off near his vehicle.

Cashe was posthumously awarded the Silver Star for heroism.

Cashe was posthumousky awarded the Silver Star for heroism after his death at 35 while on duty in Iraqhttps://t.co/a4Pbp3UERU had said ALL players' helmets would have Antwon Rose Jr's name pic.twitter.com/UMqbxVo6mj

No, Limiting Government’s Power Over You Isn’t Tying Their Hands During a Health Crisis

The move has been widely received with praise for Villanueva, himself a former Army Ranger, but there has been more than a little anger directed at him, too. Accusations of racism have popped up on the internet. Moreover, Rose’s mother has also publicly denounced Villanueva’s move.

Posting to Facebook, Rose’s mother, Michelle Kenny, denounced Villanueva. She accused him of being “negative” and not being a team player:

Let me very very very clear. The Pittsburgh Steelers took a team vote. Obviously one person didn’t like the results so they chose to do something different. I have nothing against vets and absolutely appreciate everything that they have done and continue to do for us. But this one person showed us exactly who he is and obviously he didn’t approve of how the vote turned out. In my opinion; that’s for his coach, team and organization to address NOT ME!

While he was so busy being negative what it actually did now forced more people to engage in this conversation. I’m going to use this negative press and negativity to motivate me to hold the Pittsburgh Steelers even more accountable!!! Yes I believe in second chances but as we all know I believe in putting in the work and that’s how I base my collaborations. They came to me as a team/organization and I don’t care how good of an individual you are; if you are not a TEAM player then maybe you are playing for the wrong team!!! You can’t stop nothing god put in motion and I’m here for the long haul. Touchdown baby!!

According to Trib Live, Villanueva spoke to Steelers coach Mike Tomlin, before putting Cashe’s name on the back of his helmet and received his blessing.

“That’s been a blanket approach that we’ve had, and so I think it needs to further explanation as far as our support for Al Villanueva or anyone else in terms of what they do or doesn’t do in regards to social justice, as long as they adhere to that outline.”

He’s not the only player who decided to go a different route from the Black Lives Matter approved names. Jaguars’ tight end Tyler Eifert broke with many other players and put the name of David Dorn on his helmet. Dorn, a retired police captain, was killed by BLM rioters when they attempted to break into a pawn shop.

Sports and politics do not mix..how do you build a team with this going on.. 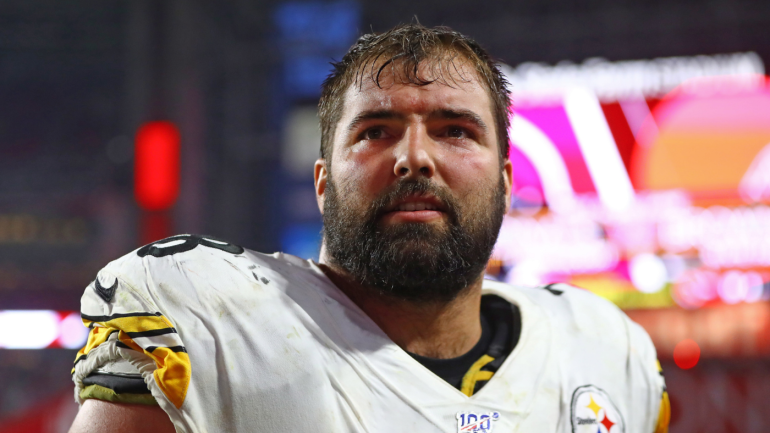 The NFL won’t care until a marquis player shows up to stand for the national anthem, then walks out into the middle of the playing field, places his helmet on the field, takes off his jersey to lay beside it and says I quit.

I hope Villanueva does’t get destroyed on the field as payback.

Rose’s mother said: “The Pittsburgh Steelers took a team vote. Obviously one person didn’t like the results so they chose to do something different.”

That’s rich. The entire nation took a vote in November 2016 and obviously one side didn’t like the results so they chose to do something different.

5 posted on 09/16/2020 8:29:05 AM PDT by ProtectOurFreedom ("And oft conducted by historic truth, We tread the long extent of backward time.")
[ Post Reply | Private Reply | To 1 | View Replies]
To: SeekAndFind
Alejandro is a good guy. He was clever enough to announce to the world that Mike Tomlin was the j@ck@$$ who instituted the national anthem boycott by publicly apologizing to him for embarrassing the coach by coming out alone.

If anyone is going to save the NFL from suicide, it will be men like Alejandro.

He played ball at West Point.

Note to Michelle Kenny: BLM is not a team player. If the people of BLM don’t want to play on the USA TEAM, then they need to go elsewhere. We ain’t buying what you’re selling.

I can’t in good conscience watch the NFL anymore.

Shut up and PLAY!

Villanueva “lacks athleticism” and isn’t a “fast twitch athlete;” he doesn’t have “burst” or “upside.” But does have a “motor that never stops,” he’s a “blue collar player,” and he “brings his lunch pail to work.” It’s a wonder he’s an effective left tackle having to play with that blue collar on and toting that lunch pail around on the field!

Rose’s mother needs to take a hard look in the mirror. She raised a son who was all about bad choices. In a vehicle involved in a drive-by shooting. Ran from the police when they tried to apprehend him. Precious little Antwon had a stolen gun under his seat in the vehicle and had gunshot residue on his hands.

That’s a typical description for every single thug killed in the past decade that triggered subsequent riots. Not one of them were upstanding, law-abiding citizens. Plus that community is thoroughly infected with the “You can’t touch me — I’m a protected class” attitude and consequently kills, attacks, or runs from the police.

Too few and far between to change my mind at this point.