Yes, he did. Joe and no amount of racial pandering will change that historical fact. A Joe Biden terrified by his puppet masters that the African-American vote is slipping away from the party of pandering made that absurd claim during a rare day trip from his basement bunker to Kenosha, Wisconsin. At least his handlers were able to find and lead him to Wisconsin which Hillary Clinton failed to do in 2016.

Biden had just finished a meeting with the family of Jacob Blake, the young African-American shot after struggling with police his girlfriend had called for breaking into her place and who was wanted on a felony warrant for sexual abuse. As part of his and his party’s portrayal of the Trump administration as an oppressor of blacks and white people and as the guardian of systemic racism, even if it is Democrats who run the system where urban unrest is occurring, Biden decided to add another wrinkle – whites are stealing credit for African-American inventions:

I believe the phase he used was “...not a white guy named Edison”, which to me is even more pandering.

2 posted on 09/12/2020 9:24:11 AM PDT by hanamizu
[ Post Reply | Private Reply | To 1 | View Replies]
To: raptor22
The history I read said that the true inventor of the light bulb was a Princeton grad. He was the one who borrowed the vacuum pump from his alma mater and suggested enclosing the carbon filament in a evacuated glass container -- "bulb".

Edison was an interesting piece of work. I used to idolize the man, until I learned just how much he used the people working in his lab, stealing credit for work he never did.

On the other hand, he did invent waxed paper when his girlfriend complained about the chocolates sticking to the paper.

That would make Biden a think-they-thinker.

4 posted on 09/12/2020 10:03:27 AM PDT by BuffaloJack (Neither safety nor security exists in nature. Everything is dangerous and has risk.)
[ Post Reply | Private Reply | To 1 | View Replies]
To: asinclair
Edison shares a lot in common with the billionaires we have today. Still, his subordinates who he was employing spent years working on making the light bulb a commercially viable product at his direction. Even the person Biden who was referring to did not invent the light bulb. He was a patent drafter who drew pictures for other inventors of their inventions. He apparently became an authority on the development of light bulbs during that time period and illustrated a book on the subject. Whether or not the patent for filaments that he helped one of Edison's competitors get was instrumental in advancing light bulb technology is questionable.

How does Latimer's patent from September 1891 differ from Edison's ground breaking light bulb patent of January 1880? 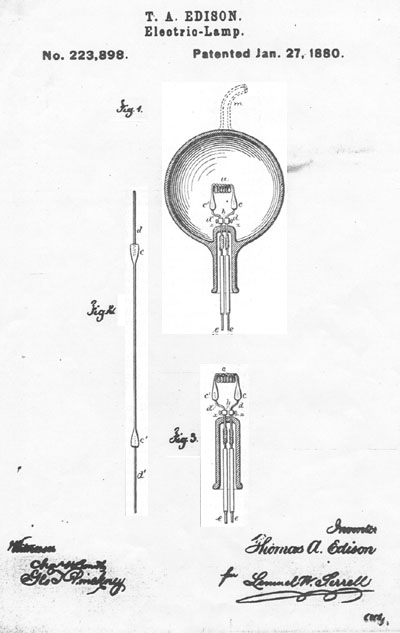 vs Latimer's patent granted 1 year and 9 months later. Which one is more recognizable today? Did Edison, or any other light bulb manufacturer have to pay license fees for using the technology, or was it just one of many incremental improvements made by the hundreds of people working at that time to improve the light bulb's longevity and reliability? The way that the Biden's of the world are going on about it you would think that this guy had come up with a radical improvement when Edison and many others had also been experimenting with various forms of carbon filaments. To me it looks like one more fillament design that is not very recognizable because it likely was not used by many if any manufacturers of the time period or afterwards.

I hope the fact-checker Joe brings with him to the debates is the same one that gave him this fake history.

The real hero inventor of the early 20th. century was one of Edison’s chief rivals, Nicholas Tesla.