Virus-Panicked Liberal Gun Buyers Are Getting Angry When They Discover Their Own Gun Control Laws
RedState ^ | April 10, 2020 | Kira Davis

I was chatting with a friend of mine recently and the topic of gun sales came up. My friend’s father owns a gun range near me and she said he’s seen a huge amount of liberals coming in to purchase weapons in recent weeks.

How does he know they’re liberals?

“They’re shocked to discover they can’t just walk out of the store with a gun.”

We’ve all heard about gun sales skyrocketing recently, but I hadn’t considered some of the tangential effects of the phenomenon until I spoke to my friend. Not only are many liberals suddenly learning to love their Second Amendment rights, many of them are finding out that the gun control narrative in this country — as repeated loudly and often by Hollywood and the mainstream media — is a complete lie.

So, I contacted my friend’s father to ask about what he is seeing personally at his own range these days. Gregg Bouslog runs On-Target Indoor Shooting Range in Laguna Niguel, CA. It’s where I taught my son to shoot and where I’ll teach my daughter once the chaos lifts. He says that while others are stuck at home while the economy grinds to a halt, he’s been working nonstop at the range as the applications for background checks and permits are stacking up daily. Bouslog claims he hasn’t done business like this since the days of Obama.

As the owner of an indoor shooting range and gun store here in California these past 14 years we have never experienced such a huge demand for firearms and ammunition – even higher than the famous Obama rush of 2012/2013. While it’s nice to see some businesses flourishing in these scary times, Bouslog says that safety has been a huge issue at the range, as many first-time buyers seem to have gotten all of their notions about guns and gun safety from television.

We tried to look at just who the new firearm purchasers were and we believe that more than 60% of these individuals were first time buyers. I can’t describe the amount of fear in my staff as we had the buyers show proof of safe handling as part of the purchase process as required by law. You have never seen so many barrels pointed at sales staff and other customers. It was truly frightening. We had to keep stopping the process to give quick safety lessons. We are adding many more basic classes in the coming weeks and encouraged these buyers to please attend. We hope they do.

This isn’t hard to believe. As a gun-owner who formerly abhorred the Second Amendment, I can personally testify to the fact that most people who believe they are anti-gun are actually just anti-stupid. They just don’t realize they’re projecting their own stupidity onto law-abiding gun owners. They imagine that we gun owners are just a bunch of yahoos out here combing our mullets, waving our guns around to look sexy while we look for anything or anyone to shoot at any time. They have no respect for the power of a weapon and treat them accordingly, which is what Bouslog is witnessing firsthand at his range. We gun owners, of course, take safety, care and precautions quite seriously. These are ingrained in the culture of gun ownership.

While the safety of the employees at the range is a very serious matter, the most amusing and annoying part for the staff has been watching these first-time buyers discover just how stringent gun laws in California really are, including one of our newest laws requiring background checks before buying ammunition. Bouslog says it’s a bridge too far for the people who have been told their whole lives that it’s easier to get a gun than an abortion.

More than a dozen of these buyers (men and women) actually thought that since they filled out and signed everything, they could just walk out and go home with the firearm. Several actually said they saw how easy it was to buy a gun on TV and why did they have to fill out all these forms.

The majority of these first timers lost their minds when we went through the Ammo Law requirements. Most used language not normally heard, even in a gun range. We pointed out that since no one working here voted for these laws, then maybe they might know someone who did. And, maybe they should go back and talk to those people and tell them to re-think their position on firearms – we were trying to be nice.

Most were VERY vocal about why it takes 10 days minimum (sometimes longer if the DOJ is backed up) to take their property home with them. They ask why do I need to wait 10 days if I need the protection today or tomorrow? We pointed out again that no one working here voted in support of that law.

They really went crazy when we told them that for each firearm they had to do the same amount of paperwork and they could only purchase ONE handgun every 30 days. Again, we didn’t [vote] for that law.

We had people cuss at us and stomp out when we explained that secondary identification had to be part of the paperwork, as they felt insulted that what they had wasn’t good enough. We have a number of Yelp reviews calling us names and other things about how bad we are because of this whole new buyer rush

Again, I truly hope for the safety of those range employees in the face of so many uninformed and incurious first-time buyers. That being said, I find this whole situation fascinating. So many things in our economy and way of life are shifting monumentally these days. Could the gun control battle be one of them?

I discovered the idiocy of my anti-gun beliefs once I decided to learn about them firsthand. The Hollywood mystique immediately fell away and I was imbued with a new respect for weaponry and the people who dedicate their lives to weapons safety and serving and protecting the Second Amendment. You can’t know how bonkers our gun control laws are until you go try to buy one yourself.

There are a lot of people like me out there right now — first-timers and Second Amendment haters who feel like a hypocrite for wanting a gun for protection. Like I did, now they are navigating our convoluted gun laws for themselves and discovering that it is just not possible to walk into a store, buy a gun and leave with it in your pocket.

As these revelations begin to spread among our liberal brethren in the state of California, will we see a shift in gun laws and support for anti-Second Amendment legislators? Only time will tell, but it will surely be an interesting question to ponder in the coming months and years.

F these dirtbags. I’m not for them being armed. They’re the enemy.

I hear pro-gun people saying this is an opportunity to change the minds of libs. Them buying guns scares me, though. Historically, when libs arm themselves, they don’t become more conservative. What happens is that they realize that the only way guns kill people is when you point them at someone and pull the trigger. At that point they tend to point them at people they disagree with and begin pulling the trigger. 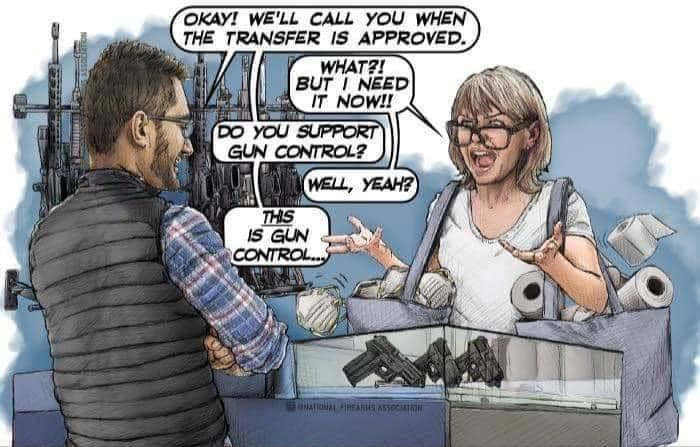 Honestly, yeah. I had some people actually reach out who I hadn’t spoken to in years ask me about guns. I helped out my friends. The rest...the rest I wondered why they were still on my Facebook, told them to go away, and then deleted them. Sorry, you don’t get to call me racist, ignorant, and brainwashed by Russia or what not for years and then expect me to help you. You’re on your own. You claim that you’re all enlightened and smarter than I am, so figure it out, genius.

NOW ‘they’ will demand that gun shows be allowed so they can take advantage of the ‘gun show loophole’ that EVERYONE talks about.

AFTER that myth is destroyed MAYBE, just MAYBE ‘we’ can recruit two or three of them...BUT, as stated earlier, do we really want them with weapons????

similarly, a friend of mine, in his early 50s, grew up in Mass, outside of Boston. he often says “I was a liberal until I got a job”

Sorry, you don’t get to call me racist, ignorant, and brainwashed by Russia or what not for years and then expect me to help you. You’re on your own. You claim that you’re all enlightened and smarter than I am, so figure it out, genius.

I have had to same experience....

Something along the lines of “Bishops ban the sign of the cross, warn that you might poke your eye out and go blind” (That was a thread here on FR recently)

Curse you both! I spent the past 10 minutes searching for that very cartoon, and boy am I glad I refreshed this thread before writing my post.

It’s a tough life folks. You reap what you sow.

15 posted on 04/10/2020 11:39:41 AM PDT by Midwesterner53
[ Post Reply | Private Reply | To 1 | View Replies]
To: sickoflibs
I have a college classmate who lives in the Bay area. Conservative fellow, an engineer who is now a venture capitalist. Makes big bucks but doesn't show it (except for living in an older single family home south of San Fran).

He decided it was time to acquire "protection" for the home and asked me for advice. After some discussion, we settled on a 9mm semi handgun. As a new owner, I did not recommend that he buy a striker fired weapon (please don't get started on that). I told him that I have a Sig P229 "closest to me." He struck paydirt at a shop an hour away from his home and put his money down on a P229 that had just arrived in the shop. It was a long line, he says.

He's not naive and understands the CA laws. He's booked range time for familiarization and safety training. Then more time to develop skills. I sent him links for items to build a decent maintenance kit for his new acquisition plus hearing and eye protection. He should be able to pick it next week.

In helping him out, I was surprised by the number of gun shops and ranges in CA. So close to near wilderness, they have lots of outdoor ranges. That's just an observation, erasing a bit of ignorance on my part.

And yet they could have got an 80% complete kit overnight and had a functioning AR15 in a couple hours, but they would still need to go through the crap to buy ammunition.

It is in free states.
I hope someday California is once again free.

Exactly the same here. I am the go-to guy for all things guns and and reloading etc for a pretty wide circle of people. If you’re a lib, commie, SJW, etc. No thx, not imparting knowledge on you.

At least not for a while. Last time was in the early aughts for me. Walked out of Central Loan in downtown Seattle during my lunch hour with a Dan Wesson 15-2 in a brown paper bag.