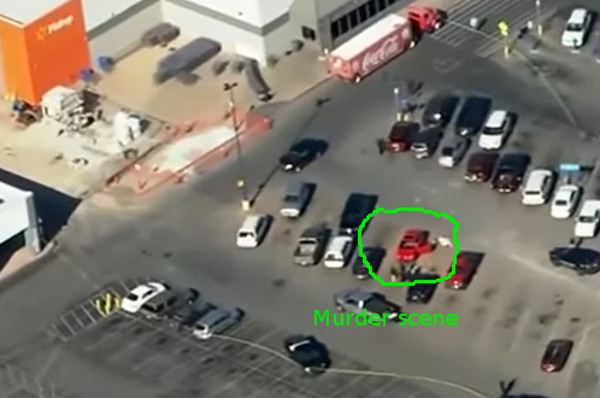 Image from ABC, text and green added by Dean Weingarten

On Monday, 18 November, 2019, at about 9 a.m., a man, confirmed as Yayo Varela, Jr. killed two people in the Walmat Parking lot in Duncan, Oklahoma.

A witness at the Walmart double murder in Duncan, confirms the murderer was stopped by an armed citizen.  The murderer killed a man and a woman in a parked red sedan in the parking lot. The woman is reported to have worked in the Walmart in question.

A witness told ABC news:   "He told him to stop, then after that, he did stop, and then the gunman turned the weapon on himself."

The Daily Mail has reported the woman was the estranged wife of the murderer. From the dailymail.co.uk:


A man shot and killed his estranged wife and her new boyfriend in a Walmart parking lot in Oklahoma before turning the gun on himself when an armed citizen intervened.

According to the Oklahoma Highway Patrol, a man wearing all black opened fire outside the supercenter in Duncan, which is located at 3393 North 81 Highway. Duncan is about 80 miles south of Oklahoma City.

Officers from the Duncan Police Department said the wife and her boyfriend were found dead inside their car.

The windshield of the car shows nine bullet holes, three on the driver's side, six on the passenger's side.

The FBI, which only recently started tracking intervention by armed citizens,  states that concealed handgun permit holders stop 8% of active shooters. The Crime Prevention Research Center (CPRC) reports the FBI only catches one half of the incidents.

In the United States, people with carry permits are now over 18.66 million. That is over 7 percent of adults in the United States. The number of people who can legally carry handguns is much larger, because sixteen states now have Constitutional Carry.

Oklahoma restored Constitutional Carry in their state 17 days before the Walmart killing.

15 States have passed some version of Constitutional Carry since 2003.


No increases in murder have been noted as Constitutional Carry has been implemented in the 15 states.

Good people, all of them should be ARMED. This could be repeated again and again.

I guess our wonderful, gun hating media forgot to include that basic fact. The Conceal and Carry stopped the problem....

Not impossible. The killer nearly emptied his gun on his wife and her man. IF the killer had more guns or a lot more ammunition on his person, THEN he was likely to go on a spree. If not, he really couldn't.

Absence of evidence is not evidence of absence.

“Absence of evidence is not evidence of absence.”

True, but that’s the exact principle the Dems are using against President Trump....opinions, presumptions and hearsay outweigh facts and lack of evidence.

In these Allahu Akbar days, it is suicidal in some areas, to go out unarmed, prudent everywhere else.

6. It should be “absence of action is not absence of future intent”.