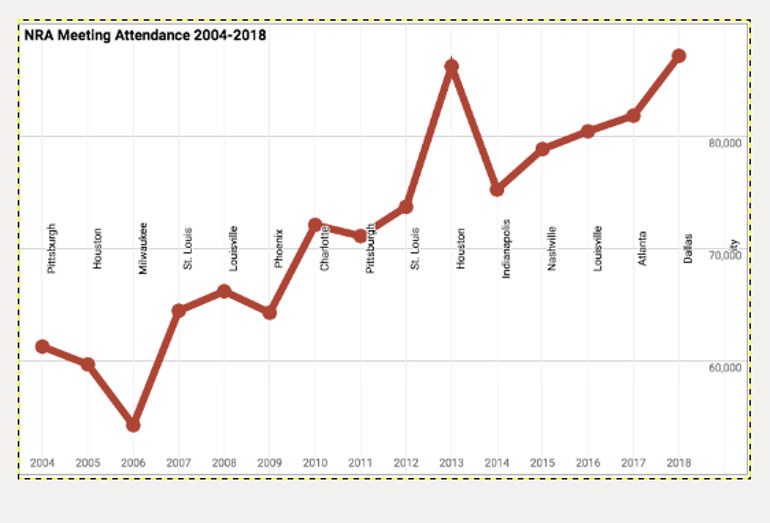 The Washington Post published an article meant to convince the American people that their perceptions of gun ownership in the United States are wrong. They attempt to convince people that surveys showing lower numbers are goodthink.


As some 70,000 people attended the NRA’s annual convention last week, nearly three months after the horrific school shooting in Parkland, Fla., the reignited national debate on guns seems to be at a stalemate.

But the discussion lacks some basic facts about guns in the United States. For example, how many people in the United States own a firearm? As with most gun issues, the answer is hotly disputed. Perhaps just as important, what do Americans believe to be the percentage of their fellow citizens who own guns — and will that increase or decrease in the coming years?

Our research finds that Americans substantially overestimate the gun-owner population — and that what they believe about gun ownership is related to what gun policies they support.

Notice the glaring error in the very first sentence?  "As some 70,000 people attended" (bold added) the NRA annual meeting in Dallas. Attendees have been over 80,000 for the last three meetings. The meeting in Dallas had 87,154 members attending.  The writers of the Washington Post article did not have the actual numbers, because the attendance numbers were only totaled and released yesterday, after their article was published. There was no reason to believe the numbers would drop lower than the last two years.

Selection bias is difficult to overcome for all researchers. The authors of the Washington Post article are no exception.

As the authors point out, most people see the numbers of gun owners increasing. It is easy to see why. In the vast majority of states, infringements on the right to bear arms are being reduced or eliminated. The number of guns in the United States increased by over a hundred million in the last decade. School shooting teams are on the rise. People trust the government less and are concerned about social unrest. The number of women and minority gun owners is rising.

All of these things point toward increased gun ownership. What is the actual number of gun owners in the United States? No one knows for sure. Given the rising distrust of government and increased talk of gun bans, it is easy to understand how polling could substantially underestimate the numbers of gun owners.

Members of the public who see their friends and relatives buying guns in record numbers, who see more gun ranges being built, shooting clubs prospering, and carry permits soaring, may have a better understanding of the dynamics involved than the Authors of the article.

©2018 by Dean Weingarten: Permission to share is granted when this notice and link are included.

There is considerable variation about how many people own guns. When more gun restrictions are being promoted/discussed, fewer people say they have guns.

The absolute floor I’ve seen everywhere else is 33% and I’ve seen estimates that run as high as 50%. Lots of people don’t like to tell survey takers they’re gun owners. Others of us have had tragic boating accidents.....

Things that can be tracked with certainty are the number of guns purchased (way up in the last decade), the number of concealed carry permits issued (over 15 million), NRA membership (over 6 million now). All of these indicate gun ownership is increasing rather than decreasing.

Yet sales have gone up wildly over the last 10 years.

If even the the anti- Constitution, gun-hating Dem/lib/loons are buying guns...how can they belittle the numbers of Constitution-loving Conservative gun ownership?

We’re out here in numbers too great to imagine...and they know it.

I was a strong supporter of gun ownership rights long before I actually purchased a gun. A lot of people fall into that camp.

5 posted on 05/15/2018 6:37:16 AM PDT by robroys woman (So you're not confused, I'm using my wife's account.)
[ Post Reply | Private Reply | To 1 | View Replies]
To: marktwain
Surveys are doomed to be inaccurate. Any gun owner with any sense will respond negatively to the question "Do you own any firearms".

Last year I got an ambulance ride to the hospital after my heart stopped and my wearable defibrillator went off in the Chipotle parking lot. When I got to the hospital and took my clothes the nurse, in reference to my handgun said "We'll lock this up for you. Be sure to ask for it when we check you out." Later she came by with "the survey" - Have you experienced any episodes of depression? Any thoughts of suicide? Do you have any firearms in your home? Etc. I answered "No" to all the questions. She never even blinked.

For the record, my medical file still says that I don't own any firearms.

That was just caused by me and a couple of other guys buying way more guns than we need. Sales will drop off soon though, since we're running out of warehouse space. :o)

This is an outgrowth of the ridiculous Harvard/Northeast U “survey” which asserts that three percent of gun owners possess fifty percent of America’s guns. It also claims that gun owners make up only one sixth of the total population, thus signalling politicians that they can safely advance confiscatory gun control with no election day repercussions.

As noted, what sane gun owner is going to tell some anonymous poll taker that he owns guns, or even more stupidly, how many?

I too contributed greatly, though I’ve slowed down. I’ve only bought 4 guns since the 1st of the year;

Today I’m going into Phoenix to pick up a Charter Arms .38 - my first snubby. My first purchase since the beginning of the year. The good news is, handguns take up much less room in the safe than mil surps.

I gut rid of all mine. Gut skared cuz the TeeVee said they can just go on a rampaje all by them selves.

Many gun owners would rather not claim that they own guns when speaking to a surveyor.

Also, there are many former gun owners who have had terrible boating accidents that they'd rather not talk about.

Plus, a lot of these studies probably don’t take into account how many people were gun owners until just before an unfortunate boating accident.