People wonder why Melania has been shunned by magazine editors around the world. It is curious, it would seem she is a natural having graced covers for most of her life. 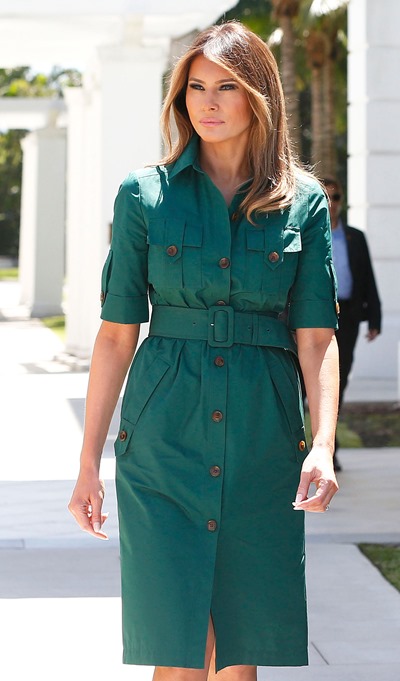 And in Michelle Obama-ese, she can “totally rock” a shirtwaist like nobody.

But alas, we are experiencing the effects of PTSD (President Trump Stress Disorder) by-proxy syndrome. Hatin’ on Trump is not enough, the vitriol must be transferred to everything and anything associated with the President. And in Liberal-Land that includes the President’s wife and children - unless of course the President is a Democrat and then such behavior evokes feelings of outrage.

So forget the type of effusive praise heaped upon our previous FLOTUS (did you know she was black?). Today’s FLOTUS standard is more like: “Why Can’t Melania Trump Wear A Coat Properly?” 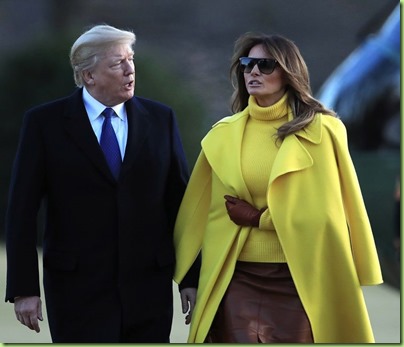 Which, by the way, is called “shrobing” (shoulder robing) and considered chic when Prince Harry’s Hollywood tart does it: 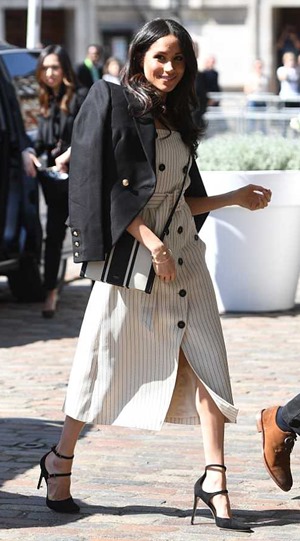 The Daily Mail suggests that Meghan Markle has perfected the art of shrobing when she was seen stepping out with her blazer draped over her shoulder. This fashion technique is called “shoulder-robing” which is now dubbed “shrobing.”

Not to mention that other fashion icons such as Anna Wintour and Diana Vreeland have been sporting the look for decades, as did Princess Diana. But none of them were married to Donald Trump.

It appears that the fashion world has moved on from ignoring Melania to open criticism such as Francesca Specter’s Express report on Melania’s “strange pink and yellow outfit” at the Opioid Memorial: 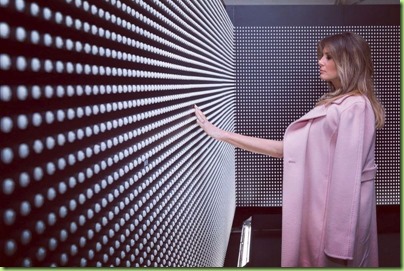 I think the fashion world, like the political world just needs to get a grip on reality. The Comey memos just turned over to Congress seem to clearly indicate that President Trump did not, repeat NOT collude with the Russians, all reportage to the contrary. And if you want to talk about truly strange pink and yellow outfits…well, I think you’re looking at the wrong FLOTUS.

It’s interesting to note that the fashion world has regained it’s snarkiness – a quality they seemed to have  completely lost during the Obama Occupation. Reclaimed for the Trump years:

Specter goes on to describe how Melania “topped off her bonkers getup” with yellow suede pumps from So Kate 120 Christian Louboutin. She finishes off her critique by saying that Melania Trump’s choice of attire was “so off-beat” that she “might as well have been dressing badly on purpose.”

I’m sorry Francis, but Lady M is the Grand Mistress Emeritus of that somewhat dubious honor. 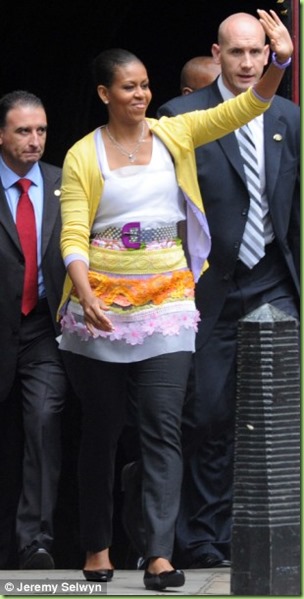 The layered Cinco de Mayo tunic with the Checkered Cab Lucite belt paired with the double lavender/yellow mini-me sweater over your basic black trousers might just take the cake in the “dressing badly on purpose” category.

Wonderful post & pix, thanks. Don’t forget Michelle Obama’s ‘toned’ arms, a phrase which they repeated with absolutely EVERY pix of her that ever ran.