Oh great! This week I’ve got something real to whine about. It appears that the out-of-control-crashing-Chinese-satellite, Tiangong-1, is going to make reentry on Easter and there is nowhere I can go to escape it.

Both of my bunkers are under attack: all of northern Utah and all of Southeast Michigan are in its path of doom! Maybe I should have retired to Florida or Arizona like everyone else. Although it looks like the only places in the continental US that you’re guaranteed to be debris free is a bit of northern Oregon, Washington, northern Idaho, Montana, North Dakota, Minnesota, Michigan’s Upper Peninsula and northern Maine – not normally considered retirement destinations (unless you are hpsurf or Lady Bikki).

The only good news is that San Francisco and New York are also in its path. The bad news is that D.C. appears to have slipped the trajectory of the space junk.

Now if you’ll excuse me I have to go find my umbrella and tinfoil hat and get busy tracking this sucker. 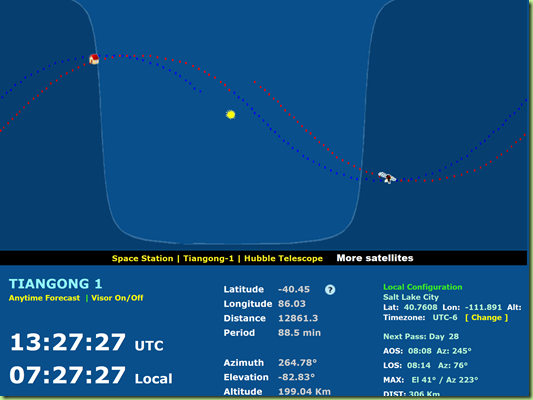 I would advise the rest of you stuck in the yellow band area do the same.

Great target practice for our ABM system, although the pretty much known trajectory is cheating a little.