It should not surprise or shock that President Barack Hussein Obama has been revealed to have derailed the investigation and prosecution of Iran’s terrorist sock puppet, Hezbollah, and its drug-running operation in order to complete the fatally flawed Iran nuclear deal. Obama gave aid and comfort to terrorist groups and their state sponsors from the day he was sworn in, to the point of actual criminality.

Consider the case of Bowe Bergdahl, the deserter who left his post and his comrades in am Afghan combat zone to find himself and also to find the Taliban. Former U.N. Ambassador and National Security adviser Susan Rice, propagator of the Benghazi video lie, laughingly said on the same talk show circuit that Bowe Bergdahl had “served with distinction.” This was the administration view of the man whom Obama would trade key Taliban leaders in our custody for.

President Obama welcomed and commiserated with Bowe Bergdahl’s parents in the Rose Garden on May 31, 2014. It would be stretching credulity to beyond the breaking point to believe President Obama did not know when it was announced we were trading five top Taliban commanders, soon to be free to return to the terrorist battlefield, for Bergdahl.

Even if Bergdahl was not a deserter, the trade would have been a bad deal. As Investor’s Business Daily noted in an editorial charging “Obama Gave Material Assistance To Our Taliban Enemy”, President Obama committed a federal crime by trading Taliban leaders for Bergdahl:

As former congressman and Afghanistan veteran Allen West points out, President Obama signed into law only months ago the National Defense Authorization Act, which makes it a crime to offer or provide any material support to terrorist groups. It makes no exception as to who and under which circumstances.

The Taliban is considered a non-state terrorist group to which Obama has returned five of the worst terrorists held at Guantanamo. They are not foot soldiers and this exchange was not at the end of a war, when prisoner swaps often happen. They are four-star general equivalents who will return to the battlefield to target and kill Americans again. If that's not material assistance, what is?...

"We have a federal statute which makes it a felony to provide material assistance to any terrorist organization," said Fox News judicial analyst Andrew Napolitano in support of West's opinion. "It could be money, maps, professional services, any asset whatsoever, include human assets."

That Obama would endanger American security for a dubious photo-op and help empty a Guantanamo Bay terrorist detention facility he had pledged to close is beyond the pale. But then so is going to bed to rest up for a Las Vegas fund raiser the night four Americans were killed in Benghazi, including a U.S. Ambassador, Christopher Stevens. Obama, Hillary Clinton and Susan Rice couldn’t bring themselves to blame the terrorist groups that attacked in Benghazi, including ansar al-Sharia, or even to utter the phrase “radical Islamic terrorism”..They preferred to spread the lie that a video was responsible, a lie they repeated on national TV, before the United Nations and to the parents of the Benghazi dead before their sons’ caskets:

Last Thursday, Judicial Watch issued a press release announcing that on Feb. 11 it had "uncovered documents from the U.S. Department of State revealing that top aides for then-Secretary of State Hillary Clinton, including her then-chief of staff Cheryl Mills, knew from the onset that the Benghazi mission compound was under attack by armed assailants tied to a terrorist group."

The documents, obtained by Judicial Watch through a Freedom of Information Act lawsuit, make no mention of a reaction to an Internet video.

But they do contain references to an attack for which the al-Qaida-affiliated terrorist group Ansar al-Sharia had taken credit, information available to the State Department before it released the statement implicating a video.

President Obama and his administration precipitously withdrew from Iraq, snatching defeat from President Bush’s victory, and then ignored intelligence warnings on the rise of ISIS for a year: Obama once told CNN that the rise and expansion of the Islamic State was “not on my intelligence radar” As the Washington Examiner reported:

President Obama admitted to CNN's Fareed Zakaria, in a TV special "The Legacy of Barack Obama," that his administration underestimated the Islamic State terrorist group.

"The ability of ISIL to not just mass inside of Syria, but then to initiate major land offensives that took Mosul, for example, that was not on my intelligence radar screen," Obama said in a pre-taped interview that aired Wednesday evening.

Well, in order to see something on your radar, you actually have to look at it, and the fact is that President Obama from the start ignored his daily intelligence briefings, including the ones about ISIS that he ignored for a year. The fact is that President Obama, who famously dismissed ISIS as a “JV team”, ignored the intelligence reports of the rise of the Islamic State and the danger it posed. As Investor’s Business Daily editorialized, Obama’s later promise to “degrade and destroy” ISIS was an empty threat by a President who could have destroyed ISIS in the cradle but didn’t:

Those pallets stacked with cash weren’t sent there for fun.

Obama is a special friend of the media. The media hates Trump and loves Obama. So if you happen to like Trump, that means the media doesn’t care much for you.

He and Hillary tried to get the middle east overthrown by the muslim brotherhood. The first step in a plan for world-wide caliphate.

What a surprise! I always thought Obama was Sunni.

Personal opinion: Obama is neither Sunni nor Shia. He’s a full-blown atheist of the type that has ruled the major countries of the Middle East (Egypt, Syria, Iraq). Religion is a prop to him. And his supporters know it.

Some day(soon I hope) this perversion of humanity will have to answer to a Living God, Who will not be impressed. 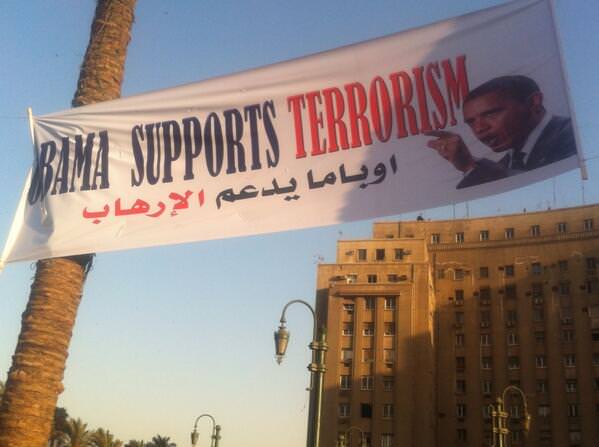 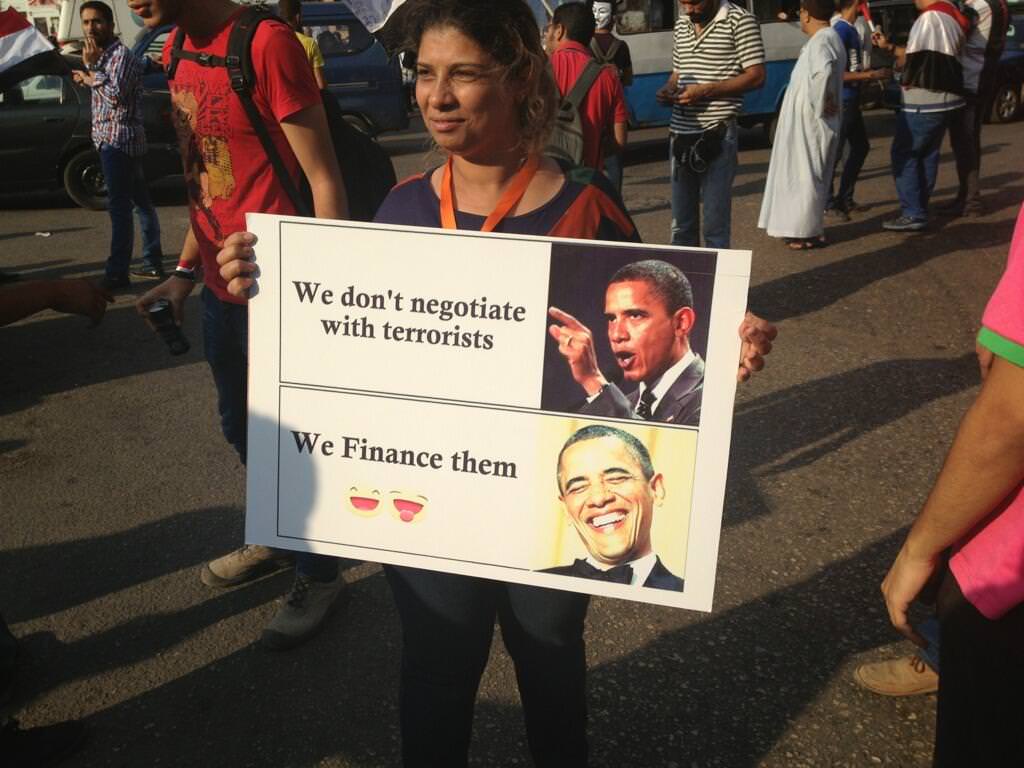 He was a supporter of terrorism well before he was inaugurated. This was well known but ignored by liberals. He was a friend of Bill Ayers. He diverted money to the PLO while on the board of the Woods Foundation. His church ran pro-Hamas articles in their church bulletin. None of this was a secret.

I am not a theist.
I do not understand the difference between a Shia or a Sunni; or a chato or Buddhist for that matter.
they all look the same to me.
you all believe in an unnatural being, a higher power which you use as an excuse to be yourself.
an excuse.
be true to yourself, be in control.
own it.
look in the mirror and see yourself.

Another Obama scandal that will be ignored. The media’s partisanship is borderline subversive, and clearly anti-American.

Another Obama scandal that will be ignored.”

Yep, and that witch Valerie Jarret is neck deep in this too. Nothing will come of it. It’s treason but Obongo is sacred and According to USA Today Trump is not fit clean Obongo’s toilet.

What does. President gotta do to convince Americans he is working for our enimies??? I mean really?

where is reason?
how did we get so astray?

We all knew all of this stuff when it was happening, but the idiot Republicans in Congress ignored it-not that they could have done anything with Eric Holder there. Trump looks at someone wrong and they want to impeach him. It was widely written, at the time, that that prisoner(terrorist) release was a crime. Obama should have never gotten away with that. He really did commit crimes. Trump has not. Makes me sick how much Obama got away with.

Obama should have never gotten away with that. He really did commit crimes. Trump has not. Makes me sick how much Obama got away with.

Yes, me, too. [Should we hash tag that?] I think if Obama ever returns to the USA he should be arrested, jailed and tried. He cannot out run the evidence. He must be convicted of being a traitor and hung.

Wouldn’t we love to see him convicted of treason. It’s exactly what it is. Problem is is that the powers that be have no guts to go after him for some reason.

Let’s not forget that huge numbers of the Toyota pickup trucks seen in the news footage of ISIS, were supplied by the US Department of State.