For those of you who missed this yesterday let me redirect you to Gerard’s recently reformatted and still excellent website, American Digest. One of yesterday’s posts, “Two riders were approaching:” All Along the Watchtower and Isaiah, contains a TED video titled Why Bob Dylan Won the Nobel Prize  - definitely worth your time to view.

The last time we talked about Dylan around here was when he received the Medal of Freedom – from President Obama. 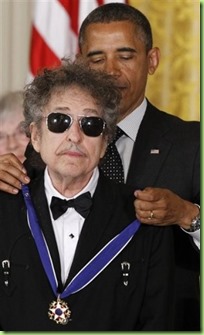 I doubt he ever would have received that honor if the tenders knew who Dylan really was. But they didn’t wish to; the left has always assumed Dylan was one of their own because of his 60’s protest songs. They never bothered to track the rest of his life’s journey as it led to a place they could not comfortably inhabit. The real Bob Dylan, né Robert Zimmerman 76 years ago, was born and raised Jewish, converted to Christianity as a young man and has remained a poet philosopher continuously reflecting his deeply held spiritual beliefs for all to see. Of course, one needs eyes to see and ears to hear. 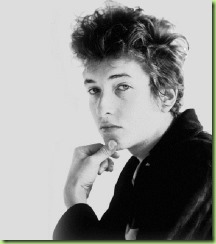 Bob Dylan: not just another pretty face. You have to work for your supper, but it will be sustaining. And that is why Dylan won the Nobel prize in literature.

Business men, they drink my wine
Plowman dig my earth
None were level on the mind
Nobody up at his word
Hey, hey

No reason to get excited
The thief he kindly spoke
There are many here among us
Who feel that life is but a joke
But, uh, but you and I, we've been through that
And this is not our fate
So let us stop talkin' falsely now
The hour's getting late, hey

All along the watchtower
Princes kept the view
While all the women came and went
Barefoot servants, too
Outside in the cold distance
A wildcat did growl
Two riders were approaching
And the wind began to howl

May God bless and keep the people of Texas and Louisiana as they battle biblical floods.