She voted, visited the grave of local suffragette Sarah Chandler Coates and turned on Spotify to dance with her mom to Nick Lowe’s “I Love the Sound of Breaking Glass.” Then she watched the returns come in, only to see Hillary Clinton lose to Donald Trump.

“I felt like somebody had died,” she said. “Not just that someone had died. But that someone was going to just keep dying every day.”

She stayed up all night but was unable to sleep, tossing and turning, getting out of bed to check on her children. She finally got up for good at 5 a.m. Wednesday morning, logged into Facebook and created the Kansas City version of Pantsuit Nation.

“I knew that if I didn’t connect with people, somehow, that I would stay useless for weeks, useless to myself, useless to my family,” Jordan said.

Created about a month ago by Clinton supporters, the national version of Pantsuit Nation is a not-so-secret Facebook group that at the last count included 3.5 million. On Tuesday it had thousands of posts celebrating the power of sisterhood. By Wednesday, Clinton mentioned it in her concession speech.

“To the millions of volunteers, community leaders, activists and union activists who knocked on doors, talked to neighbors, posted on Facebook — even in secret, private Facebook sites — I want everybody coming out from behind that and make sure your voices are heard going forward,” she said.

On Saturday, here in an area of the country that went heavily to Trump, at least 350 people gathered in a metro-area church to attend what was billed as the first meeting of Pantsuit Nation Kansas City, which as of Sunday had 11,515 members.

“We are here not because we support one candidate but because we support love is love and Black Lives Matter and climate change is real, women’s right are human rights, because immigrants make America great and every vote counts!” Laura, one of the organizers, said to wild applause.

People filled all the pews, stood three-deep in the back, and spilled out into a hallway. There were tears, hugs, many kids in strollers and others running around. Organizers, who had planned the event at a coffee house, moved it to a church as RSVPs piled up on the Facebook page. Two other similar pages organized with Jordan’s Pantsuit page to create the crowd.

“I’m floored there’s so many women here and men and people joining together!” said one of the organizers. “I guess it was my moment where I was like, ‘OK, I can fall to pieces or I can get to work.’ And I’m so proud that all of us are here willing to roll up our sleeves and go full-on Susie B!”

They passed out safety pins, which have become symbols of solidarity with groups who have felt targeted by Trump’s rhetoric during the campaign, and danced to the popular “Pantsuit Power” video.

But even as a pastor told the crowd the church was a safe space, and even though social media brought them together, they were asked to refrain from checking in to the location on Facebook.

That same anxiety is why KCUR is using Jordan’s first name only, at her request, and why we are not naming the church, at the organizers request. Many women said they are afraid of what Trump supporters have reportedly done since the election, including some violence, use of racial epithets and defacing property, and they are concerned for their friends and family.

Shannon Mullican, a social worker from Shawnee, was the only person who agreed to let KCUR use her first and last name. Yet, she fears for her friends and family, too.

At this first local Pantsuit Nation meeting, organizers broke the crowd up into smaller geographic groups, exchanged contact information and said they wanted to gather data on just what action to take. Jordan says she’d like to take a page from the Tea Party playbook after President Obama was elected.

“They organized, they got people elected,” she said. “So I said to our group that I kind of visualized it as the Tea Party on fairy dust.”

Organizers are still working out the many details, including how they will work with the national group and how they can keep the momentum going.

After a couple hours on Saturday, the crowd marched out of the church together, clapping to a song about changing the world, and walked out into sunshine. What comes next is uncertain. But for many of these women, they got something at their first Pantsuit Nation meeting that they hadn’t had in days: hope.

“She voted, visited the grave of local suffragette Sarah Chandler Coates and turned on Spotify to dance with her mom to Nick Lowe’s “I Love the Sound of Breaking Glass.” Then she watched the returns come in, only to see Hillary Clinton lose to Donald Trump. “

She shoulda voted for Palin-McCain when she had the chance.

only a blatant sexist would be euphoric Election Day believing the country was electing its first female president.

Oh and did I say career crook?

Oh but it’s just the Vagina that mattered to you, huh, “Professor”?

You ought to be ashamed ... And fired

Geeze Louise. They knew running Clinton was a YUGE mistake and sabatoged anyone in their way. Trump wasn’t my first choice but it was ABC. Anybody But Clinton.

With no voter fraud it would have been a bloodbath at the polls. How stupid are the democrats anyway?

Tonight on the news AbC was interviewing a protester in New York the idiot didn’t even vote.

There are a bunch of these. We should infiltrate.

>>“I knew that if I didn’t connect with people, somehow, that I would stay useless for weeks, useless to myself, useless to my family,” Jordan said.<<

Hey, you have nothing to worry about. No matter WHAT you do or do not do you are useless!

Good schadenfreude only gets better with age

You left out serial liar.

I was gonna type :

“More like a Hen Party on Angel Dust (PCP).”

>>That same anxiety is why KCUR is using Jordan’s first name only, at her request, and why we are not naming the church, at the organizers request. Many women said they are afraid of what Trump supporters have reportedly done since the election, including some violence, use of racial epithets and defacing property, and they are concerned for their friends and family.<<

There is not a SINGLE documented case of any pro-Trump individual doing a SINGLE violent act.

pro-hiLIARy people, OTOH have been rioting and destroying their neighborhoods since the election. The only people to be feared are YOUR OWN PEOPLE, snowflake! 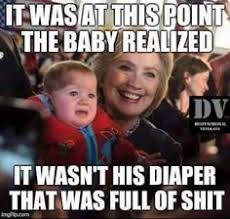 a bunch of real honeys .... probably hate Palin because she is a normal female; married, successful, has kids with a in home father..... and she is a hotie. They were trying to live their lives through the success of Hellary in a “man’s world”. Hellary lost but so did these women.

“I Love the Sound of Breaking Glass.”

My sister in law is freaking out about the supposed violence toward Clinton supporters. “It’s not hyperbole! I’m afraid for the safety of women!” She cited a guy yelling something at a woman. It wasn’t even a threat.

Perhaps one day, she will open her eyes and realize that the bogeymen she has worked herself up over don’t actually exist. I doubt she’s that smart.. but there is always the chance.