I note there was a Trigger Warning posted at the Hofstra University debate last night: 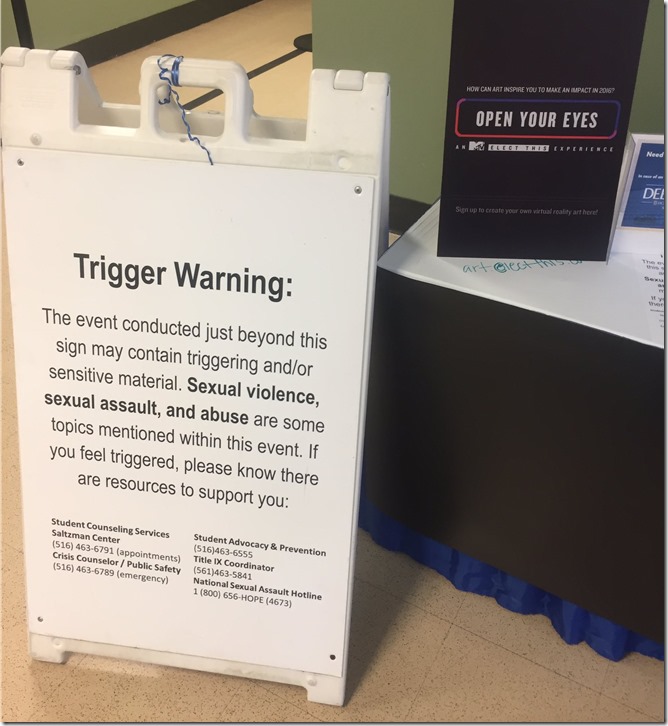 They should have added “biased opinion journalism ” to the list, in which case the “Open Your Eyes” sign on the table next to it would have made sense.

My take on the the debate-by-moderator-fact-checking format: it was a draw. Trump didn’t go all nuts-o and start screaming at Hilz,  Hilz didn’t short circuit and fall over and Lester Holt didn’t moderate. Or ask Hillary any tough questions about her emails, Benghazi, or the Clinton Foundation scam.

Lester did manage to squeeze in a few tough questions:  about Trump’s racist birther position, Trump’s mean comments about women, Trump’s taxes and Trump’s bankruptcies. Really issues that middle-America wants to know about. Questions which might lead you to think that old Lester was in the bag for Hillary if you didn’t know that it was a fair and balanced debate. Not that it mattered.  People only watch these things to see their candidate eviscerate their opponent. That didn’t happen for either camp last night, so we’ll have to hold our fire for the next one. Maybe Trump could try preparing and see how that works out.

So, who won? I say draw, butt clearly Hillary and her little happy dance indicate she thinks she is WINNING!

So don’t worry, and don’t expect the trend towards Trump in the polls to change much. He did manage to slip out of the corral for a bit, butt at least he stayed on the farm. And while Hillary didn’t implode she didn’t move the dial on her likability scale either, confirming she’s still the unlikable woman we’ve grown to know and hate.

. The federal reserve has been keeping interests rates near zero for many years to make Obama look good . As soon as they raise the interest rates above near zero the stock market will crash. Keep your money out of the stock market. people will start putting money in other things beside the stock market. Only trump knows this . Most Americans have no clue and the media lies .

This is never mentioned by the communist mainstream media. the media only keeps pounding on really “important” issues to the media like “inflate-gate of NFL football” and the lie of white police officers killing black people and a million other lies and distractions from how the world really works(another example Venezuela no coverage = socialism doesn’t work).

PICTURES ARE COMING OUT -— DID HILLARY WEAR ANOTHER EARPIECE LAST NIGHT?

Literally unbelievable that we as a society have come to this. If any of you feel "triggered" about anything do the Country and the world a favor. Pick up your teddy bear, move back into your mom's basement, and don't ever procreate, your DNA needs to be removed from the gene pool for the good of the species.

No, it’s the backup transmitter for her lapel microphone.

She did not need an earpiece,I am 66 years old and I have heard the same bilge for my entire adult life from America hating democrats,we need to make investments,code for higher taxes,bring people together while they divide people into every imaginable group,the rich have to pay their fair share while they create foundations and trusts for their millions they make on a couple hundred thousand dollar salaries and pay no taxes,they care about you while they ignore pleas from people in harm’s way,USS Cole attacked 5 sailors killed nothing happens,Somalia,Secretary of defense resigns in shame to take the blame for BJ Clintons failure to let troops go in with armor,Benghazi,that ignore pleas for men asking for help more die,lies to their families and the country,Waco Texas where men women and children were burned to death on orders from Attorney General Reno to cover for BJ Clinton,she accepted full responsibility just like Hillary accepted responsibility for Her illegal private server she used to sell out the country,so what happened to Both Reno and Hillary for accepting responsibility,Nothing to Reno,but Hillary has gotten a stiff sentence for her traitorous behaviour,she gets to run for President,yes I have heard it all before that’s why I am voting for Donald Trump

She was just happy she didn’t keel over.