I see that #HilzHiatus has rolled their candidate out this week to prove she’s not a hologram:

Although I noted in the Orlando appearance she avoided the usual side-to-side teleprompter reading - in order to avoid any more commentary on her wonky eye. Instead she either used notes on the podium, turned her entire head/body or spoke directly straight into the camera, which used to be standard practice before the multi-TOTUS era butt now appears odd. 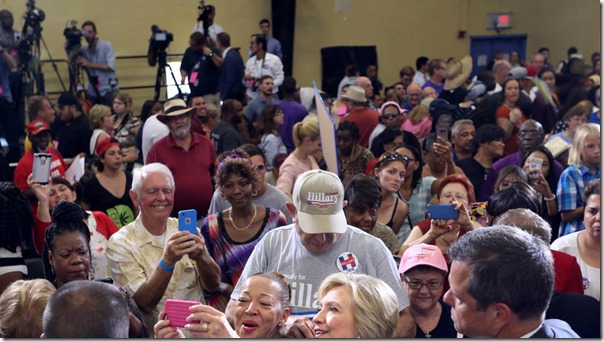 And it was only scheduled because she was in town anyway to have her picture taken with a bunch of 1 percenters at a $100,000/head fundraiser:

Clinton was scheduled to appear at a fundraiser Wednesday night at the home of attorney John Morgan in a gated community of Heathrow. Morgan and the Clinton campaign had no comment on the event, which includes a reception for those who donate $100,000.

Meanwhile, rioting continued in Charlotte where they were protesting the police shooting of an armed black man ignoring police orders. I can’t help butt note that the last time we saw so so much mayhem in a 12 month span was during the Long Hot Summer of 1967.

Back then the Black Power Movement used Civil Rights as an excuse to release mayhem in the streets. Oddly  enough that occurred during the term of Lyndon Johnson (D) - champion of the Great Society and the Black man. 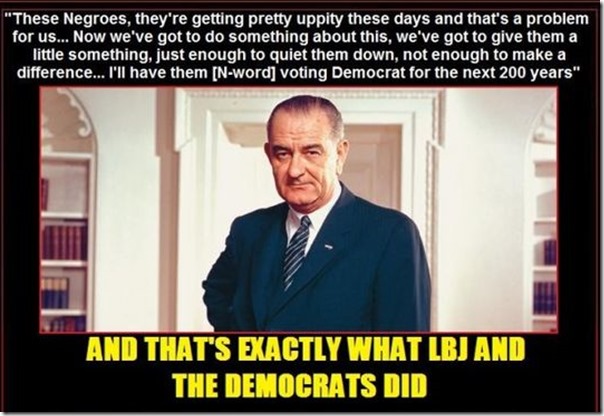 Now – in the Age of Obama- the Black Lives Matter crew, under the guise of Social Justice, is inciting riots  across the country again.  Fifty years into The Great Society and everything seems to be progressing according to plan (*H/T Lantern); the black man (and woman) is getting a little something, like flat screen TVs…and iPads.

… America is on the verge of a race war. Particularly since August 2014, from the shooting of black suspect Michael Brown by white officer Darren Wilson in Ferguson to the rise of the Black Lives Matter movement which has wedged its way into national prominence, racial unrest in this country under Obama’s reign has gone from a tense simmer to a churning boil.

The left want to pin this ugly decline on what they perceive to be the right’s racist refusal to accept a black man as President; but in fact, it is left’s own corrosive, inherently racist, identity politics, spearheaded by Obama himself, that has exacerbated rather than healed our racial divide. Frontpage

To which all I can add is Jon Gabriel’s evergreen tweet:

How much more racial healing can we endure before the entire society breaks down?

3 posted on 09/22/2016 11:23:24 AM PDT by Fiddlstix (Warning! This Is A Subliminal Tagline! Read it at your own risk!(Presented by TagLines R US))
[ Post Reply | Private Reply | To 1 | View Replies]
To: NOBO2012
Wow - just caught a between-programs promo on Antenna-TV for their nightly rebroadcasts of old Johnny Carson Tonight shows - featured a replay of a segment of one of his old monologues -
"Did you see the news? A former Miss America denies that she had sex with Bill Clinton. But poor Bill can't catch a break. Hillary just found one of Amelia Earhart's shoes under his bed."
Bet that'll never be rebroadcast.....