"I often feel like there's the Hillary standard and then there's the standard for everybody else," she told CBS.

And, strangely, many of her opponents agree with her assessment.

Here are some excerpts (outtakes, as the questions about the DNC emails didn’t make it to the final cut) from the 60 Minutes interview with Hillary yesterday:

"No, I didn't know anything about it, and I haven't read any of those," Clinton responded.

"Again, I don't have any information about this, and so I can't answer specifically," Clinton said. 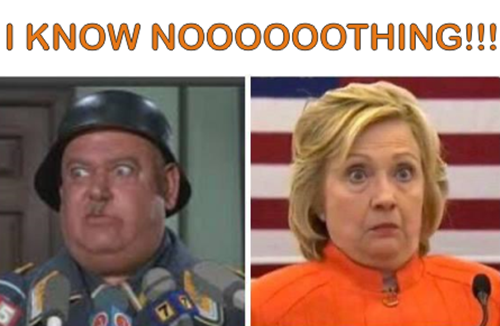 In summary: Hillary knows nothing about the emails that went missing from her bathroom server, nothing about foreign donations to her campaign (and family foundation) and she certainly ‘knows nothink!’ about all those emails demonstrating that it’s a rigged system.

So, can’t we all just get along? 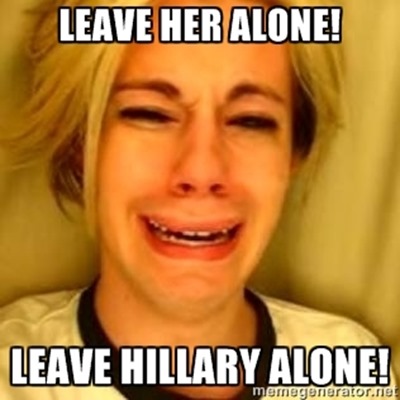 The elites always claim to know everything. Until they are faced with being held responsible for something. Then, they claim they knew nothing and were not in the loop.

The elites are only good at obfuscation and dodging accountability. Its amazing that we continue to elect these worthless blowhards.

What a disgusting clip.

How could anyone with any functioning brain at all believe these lies?

5 posted on 07/25/2016 6:15:15 AM PDT by rawcatslyentist (And God said, Let the earth bring forth grass, the herb yielding seed,)
[ Post Reply | Private Reply | To 4 | View Replies]
To: All
OF COURSE, the Clintons selling access to State Dept decisions and passing on classified information to interested parties for a foundation donation.......NEVER, EVER interfered w/ Obama/s OWN foreign policy initiatives (cue laugh machine).

ACADEMY-AWARD WORTHY---Obama puts on a convincing act.
He "knows nothing." Obama didn't even know about this (snix).

PIC Circa 2010--Ex-Pres Clinton in Moscow having a laugh w/ Putin
as strategic US uranium deposits were sold off to Russia for Big Bucks
facilitated by Secy Clinton, as Bill globe-trotted to set up the deal.

"Hahahaha. US ntl security? Hahahaha. You gotta be kidding, Vlad."

With all the top-level intel available to him, can Americans actually believe:

<><>Obama was oblivious to the Clintons jerking around US foreign policy?

<><> Obama knew nothing about the Clinton Foundation/slush fund buck-raking activities?

<><> Obama never noticed the Clinton "charity" used to worm his way into the confidences of foreign leaders.... but only those leaders w/ untapped reserves of gold, uranium, oil, and other valuable commodities?

I suddenly noticed - we’ve lost a Rodham. She used to have a hyphenated surname, feminist style. When did she drop it?

7 posted on 07/25/2016 6:21:32 AM PDT by lacrew
[ Post Reply | Private Reply | To 1 | View Replies]
To: All
AND THIS---U.S. sources indicate that the extensive DOJ probe was more focused on the possibility that Hillary's private server was used to protect messaging in which Secy Clinton allegedly discussed quid pro quo transactions with private donors to the Clinton Foundation in exchange for influence on U.S. policy.

There is an abundance of evidence to prove that she did this.

Hillary's emails on TPP are still being hidden from the public. But Hillary's support for TPP is understandable as illustrated by the TPP map. Think get rich quick Clinton Foundation and the Obama Foundations (smirk).

FACT CHECK Obama considers TPP central to his presidential legacy and to his foreign policy and economic (gag) legacies. TPP is best understood against the backdrop of Obama's post-presidential get-rich-quick foundation plans.

NOW ISN'T THIS INTERESTING? few, if any, of the RCEP and
TPP countries contributed to the buck-raking Clinton Foundation.

Looks like the Clintons and Obama divvied up the globe so that each have their own countries in order to collect big buck get-rich-quick foundation donations, honorarium, cosultancies, and int'l insider business deals.

THE FACTS ARE THESE Obama's trade deal giveaway is a huge scam...best examined against the backdrop of Obama's two tax-exempt foundations (two-that we know of).

Obama's priming the pump for donations to his two Foundations.

All of Obama's thinly-veiled actions....

.....are best understood against the backdrop of Obama's future get-rich-quick plans as an ex-president----more specifically, his two get-rich-quick Foundations (two foundations that we know of).

All these entities control billions of dollars---and Obama is lying-in-wait for his share: foreign donations, lucrative insider trade deals from untapped resources, energy deals, telecom deals, arms sales, consultancies, million dollar honorarium...and so on and so forth.

I really wish someone would photoshop H’s face into the uniform and helmet for greater ... impact.