A nation that drafts women and sends them to war is in its death throes.

A nation that drafts women and sends them to war has lost its moral compass.

What kind of nation subjects mothers, daughters, wives and sisters to a military draft where they could be placed in a direct ground combat unit?

It is a nation that is spiritually bankrupt; spent, doomed and with military and civilian leaders who are either uninformed, desperate, cowards or all three.

The naysayers will state that the Soviet Union had women in combat in World War II, particularly as snipers. Yes, they did. The Soviet Union was also in mortal peril as the German Army rolled through the country in the Summer of 1941. On December 2nd, a German reconnaissance battalion reached the village of Khimki, just five miles from Moscow. The Kremlin could be seen in the distance. Then, it started snowing, the temperatures dropped to 35 below zero and Stalin counter-attacked.

Finland utilized women in Anti-Aircraft units during the Winter War in 1939-1940, after the Soviet Union invaded the country. One of those women was my former German professor at Southern Methodist University, Dr. Margareta Deschner.

Women served in direct ground combat units of the IDF during the Six Day War in 1967. The IDF had so many problems with women in direct ground combat organizations that they were pulled out of the units after the war and then used as instructors. In 2000, Israeli social engineers forced women back in the combat arms of the IDF. Today, women make up about 3% of the combat arms and serve in several battalions that are comprised of 75% females. Apparently, problems with women in these units has been covered up by the Israeli government as reported by Arutz Sheva.

On April 27, the United State House of Representatives’ Armed Services Committee voted to back an amendment that would require women to register with the Selective Service within 30 days of turning 18 years of age, as all men must currently do.

This means that if Congress ever brings back the draft, women will be forcibly sent to war and possibly be assigned to combat arms units, aka the infantry, armor, armored cavalry, artillery.

The amendment is a response to the Pentagon’s decision to allow women to serve in combat. Supporters of drafting women point out that the ban on women in combat was the reason the Supreme Court upheld a male-only draft. Therefore, they argue, it is only logical to now force women to register for Selective Service.

Congresswoman Jackie Speier (D., CA) supported the policy change: “I actually think if we want equality in this country, if we want women to be treated precisely like men are treated and that they should not be discriminated against, we should be willing to support a universal conscription.”

Except for a few crusaders, such as Congressman Duncan Hunter, a Marine Corps vet, who served in Iraq, Congress is largely supportive of the idea of drafting women.

In all honesty, Congress doesn’t really care or understand the issue; why should they? Most of Congress has never served a day in uniform.

The Joint Chiefs don’t care. They traded their souls for benefits and defense contractor jobs years ago. When the Army Chief of Staff, a Green Beret, tells the world we need to draft women, you know the end is near.

I will say it as plain as day; the senior leadership of the United States Military is the biggest collection of sycophants and moral cowards that this nation has ever placed in the Pentagon or the War Department or in a tent, 240 years ago with General Washington.

The American people don’t care. Why should they? Most Americans have never served a day in uniform and have no clue about what is happening. Most Americans have the attention span of a fruit fly and are focused on how many “Likes” they’re getting on Facebook. Most Americans think serving your country is tantamount to standing at attention with a bucket of KFC while the National Anthem is belted out by Carrie Underwood before the Daytona 500.

Furthermore, American men aren’t exactly swaggering images of John Wayne these days. They’re none too happy to send their women to war, and that speaks volumes about the decrepit state of the nation.

Why would the United States ever need to draft women, when the country has millions and millions of men to call up, should a national security emergency arise?

Unfortunately, real war is nothing like the allusions presented by Hollywood, which showcase some pint size, anorexic female cop beating the daylights out of six gang bangers on the streets of LA: or Demi Moore pretending that she’s made it through NAVY SEAL training, aka BUD/s, aka Hell on Earth: or some Game of Thrones chick wielding a 100 pound sword with the aplomb of Ivanhoe as she lays waste to hordes of marauding men.

It’s all a make believe land and now the fantasy of women in direct combat ground units and special ops is going to be played out for real.

The delusion will continue unabated to the moment the first rounds go down range in the next war. When the body bags of young American girls are stacked like cord wood, maybe the people will finally awaken.

The supporters that want to draft women are feminists and left wing loonies who will be conveniently out of danger when the women they sent to war are shot, shredded and blown up like cardboard pop up targets.

The US Military is quickly heading for a Goetterdammerung, a Downfall of the Gods, aka total destruction as with Nazi Germany in 1945. Social engineering and moral cowardice is dooming us to obliteration. We are going to smile and lie and rationalize are way to the charnel house.

The only thing that can stop the imminent destruction of the US Military is a President Trump or Cruz. If Hillary wins, start learning Russian or Chinese and brush up on your Farci.

The answer is simple: the NFL runs on a profit motive. The military has no profit incentives and is therefore the new playground of the cultural Marxists.

What kind of nation drafts women and sends them to war? Take a look around and you’ll have a pretty good idea.

Thanks for posting. Ray Starmann is right on the mark.

3 posted on 05/02/2016 9:12:37 PM PDT by rockinqsranch (Dems, Libs, Socialists Call 'em what you will, they all have fairies livin' in their trees.)
[ Post Reply | Private Reply | To 1 | View Replies]
To: pboyington
Furthermore, American men aren’t exactly swaggering images of John Wayne these days. They’re none too happy to send their women to war, and that speaks volumes about the decrepit state of the nation.

I don't think that the author understands the actual meaning of that phrase. From the context, I'd say that he actually intends to say the exact opposite.

But the libtard uniparty wants it so they are getting it.

They will discover they do not want it.

They will eventually agree with us and prefer to just sacrifice our boys for stupid non national security mega corporation reasons.

A nation run by a bunch of freaking LIBERALS .. DEMOCRATS. 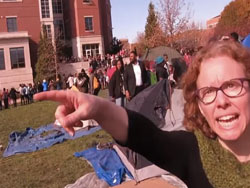 All our ENEMIES have to do to beat us in a war is draw a line in chalk.

The ridiculous spectacle of rescued POW Pfc. Jessica Lynch, the feisty, ballyhooed warrior of the Army’s 507th Maintenance Company, which was butchered early on in Iraq, occasioned the usual war whoops. Yet no one asked a simple question: What in heaven’s name was a hundred-pound girl, barely out of pigtails and high school, doing in a combat zone?

Obama Nation or abomination one in the same.

The only US Army soldier who got a Bronze Star for being cold cocked in a truck wreck, Jessica Lynch. My uncle got a WWII Service Medal only for landing on Omaha Beach with the 5th Engineering Bde! Where was his BSM?

“What kind of nation subjects mothers, daughters, wives and sisters to a military draft where they could be placed in a direct ground combat unit?”

The same one that gives them the vote while subjecting men to a draft.

Pick one. Either the people that complain about females in a draft show some real bravado and start demanding that women’s suffrage gets yanked or these special dumplings can share in signing up like the guys.

Like why the hell should a female have the rewards and none of the responsibilities?

I missed the Vietnam draft by a couple years, instead volunteered for the Navy in ‘79. If we are going to register and have a draft, it should be equal. Period. If a woman can be president, why can’t she be drafted? Fair is fair.

Only a nation that is devoid of love for women. The Israelis tried this years ago. It was a failure not due to the bravery of the women but the horrors of those captured. They do not do this anymore.

No; more like "Fruit Nation" where the men have mostly decided to become women.

Real men never let the ladies do the fighting for them.

An intensely cowardly and stupid statement. Infantry combat is nowhere near any other activity on Earth - even a sailor ought to know that.

Any "man" who would have women drafted is too gutless to have the title.

A pitiful and pathetic nation...