As the candidates - Democrat and Republican - continue to jostle each other around for political advantage, something larger than any of their egos is developing on the horizon.

It's a shame the Republican candidates continue to waste time hectoring each other over the most trivial matters when over the last few days it has become increasingly clear how completely the president of the United States sold out the interests of our country and the West to the Islamic Republic of Iran -- by far (it isn't even close) the biggest state sponsor of terrorism. The candidates are missing an extraordinary teaching moment about something of monumental significance, assuming they are paying attention to it themselves. – Roger Simon

it’s not wise to take your eye off the ball while in the heat of a campaign. If you don’t believe me, just ask Richard Nixon. While he wasn’t paying attention the Plumbers hatched the campaign scheme that ultimately took him out. 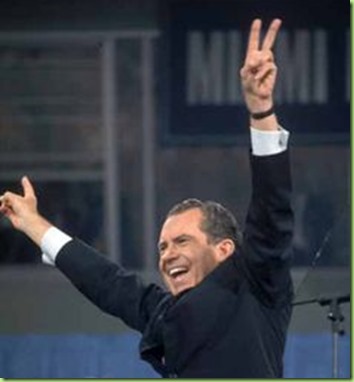 His victory was fleeting

The media, for sure, have missed this big story:

What the supposed journalists are missing is a chance to solve the greatest mystery of our times -- why Barack Obama decided to sell out those Western interests to Iran; and why, at least for the moment, he has taken the Shiite side in the thirteen hundred year plus Sunni-Shiite civil war and in so doing placed humanity in jeopardy, making the mullahs stronger and virtually assuring they will eventually have atomic weapons.

Why does this peculiar man who somehow ended up president of the United States make the often inexplicable decisions he does? Does he have real reasons (nefarious or otherwise) or is it, to be blunt, emotional disturbance?  - Roger Simon

Not that those two things are mutually exclusive, butt the media isn’t particularly interested in the answer so it looks like we won’t get a definitive answer to that not-so-rhetorical question until after he leaves office.

Some parts of the world have already weighed in however: 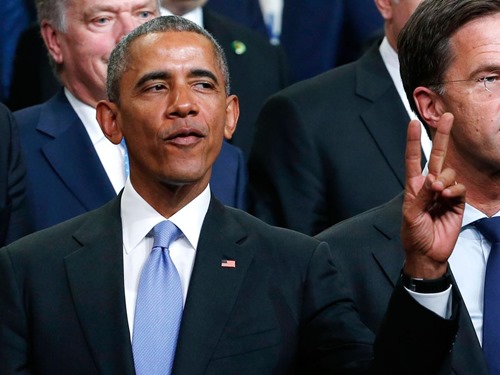 Sending the world a sign at the Nuclear Summit: “Yes, of course we will submit.”

They think he’s simply a clown:

UK and Israeli newspapers have one word for Obama – ‘clown’ – for flashing the peace sign as the photo of world leaders was taken at the end of what was a very serious two-day nuclear summit. David Cameron looked on unfavorably and others looked bemused, laughing at him no doubt. Russia didn’t bother to attend. 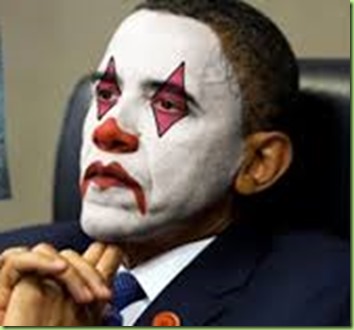 And these days he’s a sad clown at that because Iran refuses to follow his clowny instructions:

“Iran so far has followed the letter of the agreement, but the spirit of the agreement involves Iran also sending signals to the world community and businesses that it is not going to be engaging in a range of provocative actions that are going to scare businesses off. When they launch ballistic missiles with slogans calling for the destruction of Israel, that makes businesses nervous.” – Jihad Watch

Cheer up Barry, you are still historical. And when your legacy is written you will be remembered for the historical clown you are. 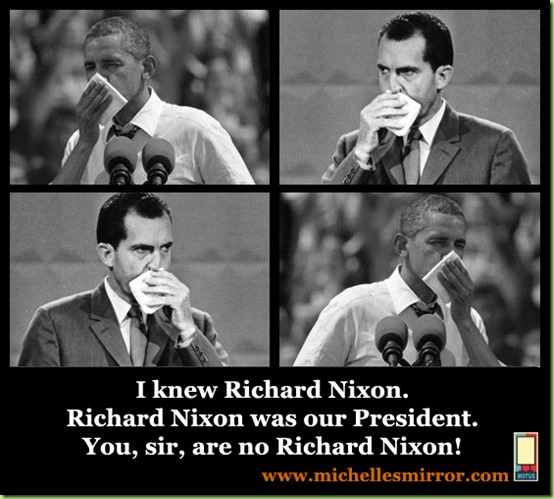 Obama: Not even a Nixon

I’m not waiting for the media to give me a “definitive answer”!

Obama’s intentions aren’t nefarious, they are outright subversive. He is a traitor.

The only presidents the media took on 24/7 were Bush II and Nixon. Kennedy was known to be a philanderer, never mentioned while he was in office and not until 20 years later. Johnson, nothing about his vulgarisms. Ford, not much of anything except being a dunce. Carter, crickets. Reagan, some but he was able to brush them off like flies on a horses ass Bush I, not much except not knowing what a scanner was. Clinton, crickets to outright support till his wife was challenged by the Magic One. And of course the Magic One for whom they do everything except throw rose petals in his path and only because they are not allowed to get that close to him.

Barry Goldwater said it in 1963 - “None Dare Call It Treason”

The enemy then was worldwide Communism, and though there was a rift in the monolithic ideology between the Chines and the Soviet varieties, there seemed to be little appetite to either exploit this rift, or do much of anything but “contain” the spread of Communism, even as the nation was decaying from within to the cancer of creeping adoption of the Communist doctrines.

It is not necessary to defeat a rival on the battlefield, if its leaders may be converted to the ideology that guides the aggressor.

No matter how evil that ideology may be.

I blame this on the Democratic Party entotal both their insiders and so-called outsiders, the Republican establishment, the cheap labor, amnesty, open borders, globalist, CFR crony capitalist donor class interests, people like Heidi Cruz, the phony liberal news and the GOPe FOX News, and the Cruz 2016 campaign and their “stop Trump” by any means including corrupt
disenfranchisement of the voter base, crony Cruz alliances with the said donor class and their FOX-GOPe-Ryan-McCain-Graham-Rove-Bush-Walker-Cruz “stop Trump” in the name of “comprehensive immigration” at any cost and only talk about hate Trump agenda of distraction for this.

And what is even more annoying is, why does Ted Cruz have to sound like Mr. Haney of Green Acres while distracting us with his GOPe “Stop Trump!” abominations?