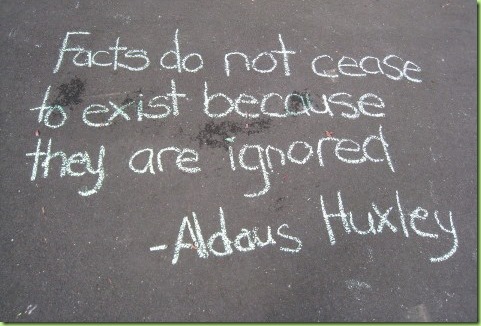 I see that a new type of hydrogen bond has been discovered.

No, not a Wall Street instrument, some kind of new-fangled chemistry discovery:

An entirely new class of hydrogen bond that forms between a boron–hydrogen group and the aromatic, π-electron system of a benzene ring has been discovered. – Chemistry World

I can’t even pretend to know what that means. Maybe Janice the Elder can help us out.

So what’s up in the world of science anyway? First we had to deal with the detection of gravitational waves a few weeks ago and now…new hydrogen bonds! 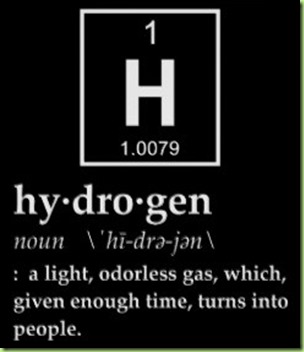 I’m confused by all these new discoveries; I thought the science was settled. This is turning into a brave new world of science.

“Even science must sometimes be treated as a possible enemy. Yes even science.”
― Aldous Huxley, Brave New World

I wonder if Barry is keeping up with all of this because, as you know, He’s a yuge fan of science: 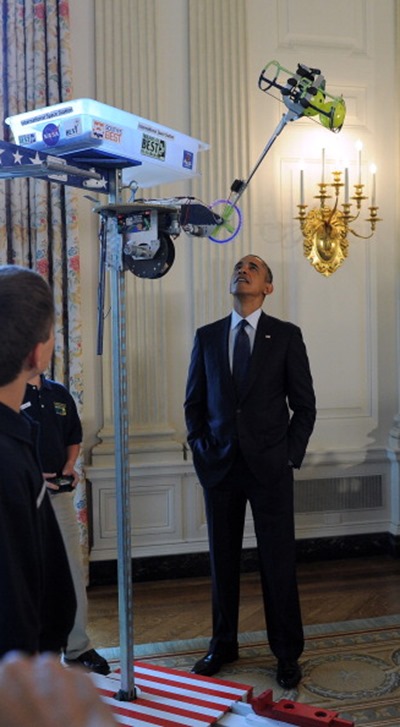 “A “drone” you say? What could I do with a thing like that?”

One of his first appointments was physicist Dr. Stephen Chu serve as U.S. Energy Secretary. He and Lady M had a competition of sorts going for awhile: she was trying to reduce childhood obesity in one generation and he was trying to reduce the U.S. per-capita consumption of fossil fuels in the same timeframe. 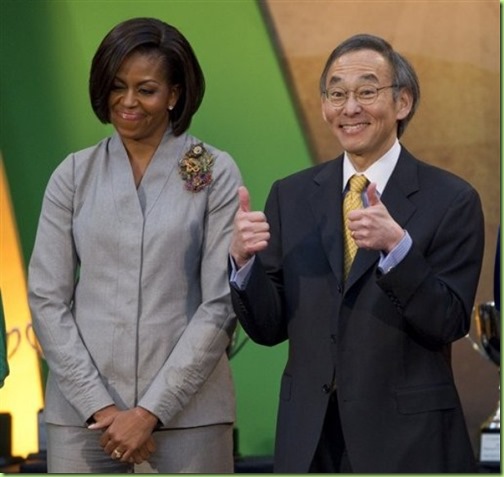 Lady M and the amazing Dr. Chu. I don’t think he’s a real doctor, but he does have a degree…in science!

Anyway, Big Guy expected to stop global warming the same way he planned to slow the rise of the oceans – by executive fiat. Results to date have been…sluggish. He blames the Republicans for dragging their feet.

The latest disappointment in a long line of failed disappointing alternative energy programs funded in large part by the U.S. tax payers is Ivanpah, a massive solar thermal power plant in the Mojave Desert.

California regulators may force a massive solar thermal power plant in the Mojave Desert to shut down after years of under-producing electricity — not to mention the plant was blinding pilots flying over the area and incinerating birds. (snip)

Ivanpah, which got a $1.6 billion loan guarantee from the Obama administration, only produced a fraction of the power state regulators expected it would. The plant only generated 45 percent of expected power in 2014 and only 68 percent in 2015, according to government data.

And it does all this at a cost of $200 per megawatt hour — nearly six times the cost of electricity from natural gas-fired power plants. Interestingly enough, Ivanpah uses natural gas to supplement its solar production. (snip)

NRG Energy said the plant had only produced about one-quarter of its expected output in the months after it opened. The company needed an infusion of cash [from the Federal Government] to help keep the project afloat. (snip)

That was only the beginning of the company’s problems. Environmentalists quickly attacked the project for killing thousands of birds since it opened. Many birds were incinerated by the intense heat being reflected off Ivanpah’s heliostats, (snip)

So, it looks like we’ve still got a few bugs to work out in our quest to replace fossil fuel with clean energy. Maybe this newly discovered hydrogen bond thingie will prove to be helpful. 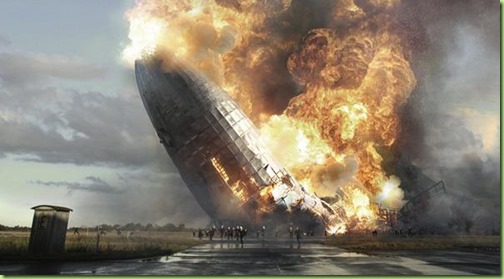 “Science is dangerous, we have to keep it most carefully chained and muzzled.”
― Aldous Huxley, Brave New World

I love boron. Boraxo is the best soap.

I’ve been developing a fascination with Bismuth lately.

While boron has it’s strong points, I simply find bismuth much more interesting.

I can see why.

But, but, but . . . Without hydrogen bonding, the ice in your mint julep would sink to the bottom. That wouldn’t do!!

After all, if you run out of element 57, you're out of bismuth.

I ponder these things periodically. --so this is all your fault SAJ.