A few random thoughts on the week. 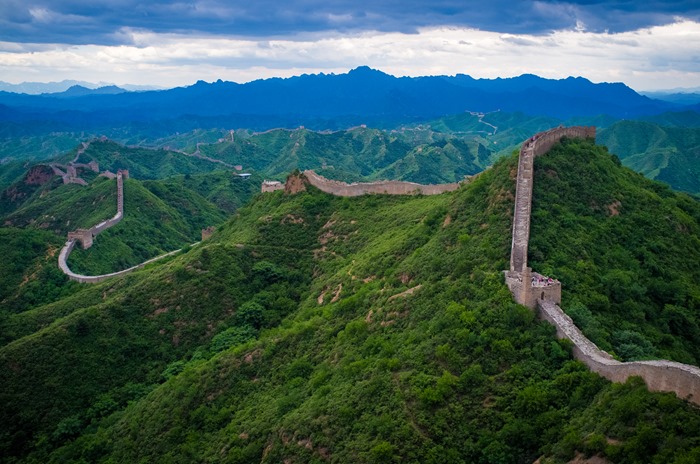 The Chinese built a wall, big deal. Iâ€™ll build one bigger, faster and stronger than any wall youâ€™ve ever seen!

The Pope takes on The Donald:

â€œA person who thinks only about building walls, wherever they may be, and not building bridges, is not Christian.â€

Ignoring the axiom â€œpeople who live in glass houses ought not throw stonesâ€  and ignoring the fact that the Vatican Wall was built specifically to keep the marauding Muslims away from the then seat of civilization, and that the Vatican has the most restrictive immigration and citizenship policies of any nation in the world,â€ itâ€™s still never a good idea to attack The Donald because The Donald always hits back.

â€œIf and when the Vatican is attacked by ISIS, which as everyone knows is ISISâ€™s ultimate trophy, I can promise you that the Pope would have only wished and prayed that Donald Trump would have been President because this would not have happened. ISIS would have been eradicated unlike what is happening now with our all talk, no action politicians.â€

Which is fairly sedate compared to some of the previous draft responses submitted by his followers:

â€œWhyâ€™d it take him three days to rise? I would have risen in three hours. Jesus, very low energy.â€  - Carlos on Twitter

â€œThis is truly one of the worst Popes. Drives a Fiat, which is a very weak car. Low energy â€“can barely hit 80 mph. I drive a Cadillac. Nice!â€ - Tom on Twitter 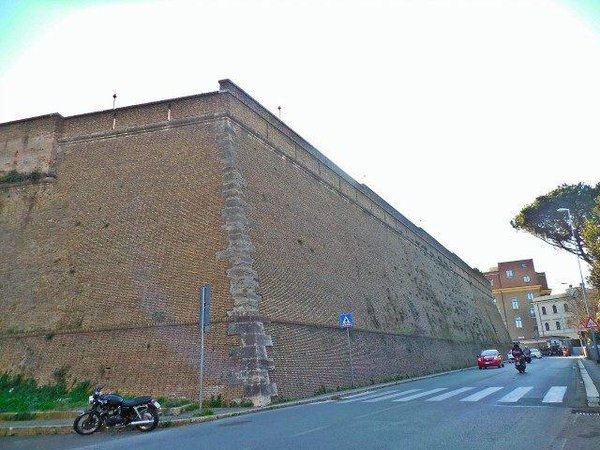 â€œYou call that a wall? Iâ€™ll build you a wall!â€ (pic h/t CaptainAmerica)

In other Barry news: White House spokesmouth confirms he wonâ€™t be attending Justice Scaliaâ€™s funeral in order to reduce the â€œsecurity footprintâ€ at the even. Same excuse reason he has given for not going to church; we sure donâ€™t want to inconvenience the little people. Instead, heâ€™ll send Joey B whose â€œsecurity footprint is at least a little bit lighter.â€ 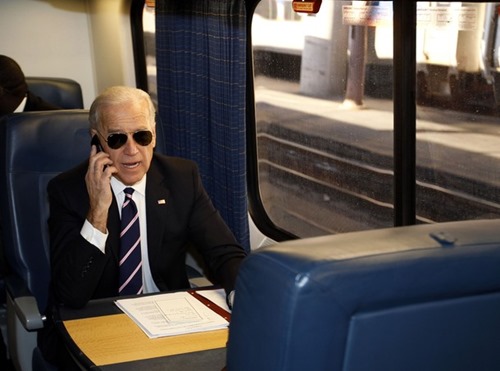 â€œSure Big Guy, I can use public transportation.â€

I wonder if he was concerned about his â€œsecurity footprintâ€ when he met with Tom Hanks and Morgan Freeman at exclusive D.C. restaurant BLT (where you can snag a Kobe ribeye for $95)? 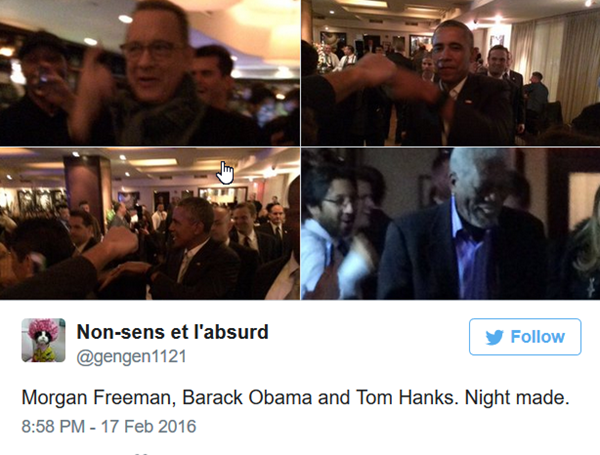 Or when he and Lady M went out for their pre-Valentine dinner? Or when MO hit Soul Cycle earlier this week?

Tom and Morgan were huddling with Barry and his Obama Foundation people to discuss funding for their family dynasty after leaving office.

Morgan was also in town to attend the Big Whiteâ€™s Black History Month reception, which followed the BLM reception. 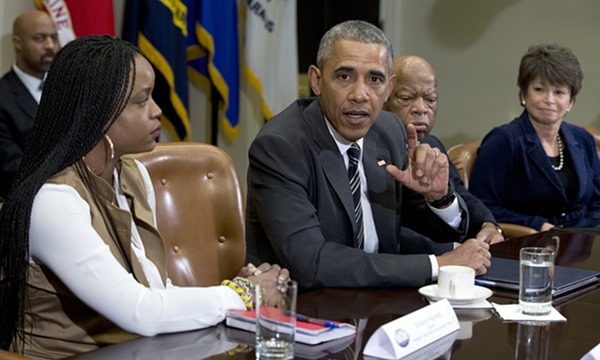 â€œThey are much better organizers than I was when I was their age, and I am confident that they are going to take America to new heights.â€

Three things: 1. Yâ€™all remember the policeman in Ferguson was cleared in the shooting of the gentle giant, right? 2. I always suspected Barry wasnâ€™t even a good community organizer, and 3. New heights? Really? 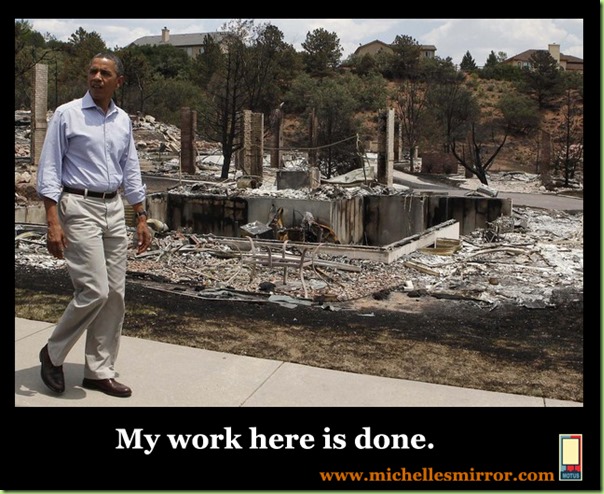 Y’all do know that the great wall did not succeed in the end right ?

Papa neglected to mention that WALLS are mentioned a couple of hundred times in the Bible, BRIDGES, never! He needs better political handlers.

And we should trust the opinion of a pope that talks about politics and says that everyone gets a free pass to heaven regardless of who they worship, sits on a throne of gold, and tours the world in a lap of luxury few men will ever know? We see your fruits and were warned about you millennia ago. We ave been expecting you and here you are.

The Pope did not call out Trump my name. The statement could apply to any body here as much as Trump. Do we not want to also build wall generally?

DT says he’ll even make mexico pay for the wall, that I’d like to see.

“Why’d it take him three days to rise? I would have risen in three hours. Jesus, very low energy.”- Carlos on Twitter

“This is truly one of the worst Popes. Drives a Fiat, which is a very weak car. Low energy -â€œcan barely hit 80 mph. I drive a Cadillac. Nice!”Â - Tom on Twitter

One MUST listen to the question that spurred the answer.
The reporter mentions TRUMP by name.

Yes, I want a wall. So, the pope was talking about me. He can go back to the Vatican and wash feet for all I care. He does NOT represent me.

Walls, like the Maginot LIne, succeed if they force the enemy to find a different way other than the easy way. The Muzlims defeated the walls at Constantinople, but it took them 700 years and a new invention.

You are correct active defense is the only workable defense.

Patton “Fixed fortifications are monuments to man’s stupidity.” it was not completely true but a good working view for the most part.

The Maginot line was a success in that defended the section of border that it was supposed to, it was a failure in that the people of France thought it protected all of France.

A tax on remittances assuming one sends them though legal channels would work, but then again why would people already breaking the law follow that one ?

But you do understand the idea behind it and what DJT is saying that is resonating with Americans, don't y'all?

That a bad idea is popular does not make it a good idea.

France loved the Maginot line right up till it failed.

Agree. The conventional wisdom is that they don’t work. When fortifications are breached, usually there is a failure in some other aspect—planning, guarding, strategy, construction. Not the walls themselves, but the reliance on the walls and failure to do other things.

This morning I was re-reading Trumps’s statement. He said “if and when” the Vatican is attacked. He didn’t use the words if ever it is attacked.

He also said everybody knows the Vatican is the ultimate trophy. I never had heard that.

I’m wondering if Trump is alluding to the third Fatima letter, the one that contained such upsetting information that it couldn’t be released.

France loved the Maginot line right up till it failed.

Well, that's YOUR designating it a "bad idea".

Don't care much for anything the French may have loved, historically typing.