Whatâ€™s life like when youâ€™re surrounded by sycophants? No matter what you do, no matter how wrong, embarrassing or just plain stupid they will tell you how great you look, did, are. Take Hillary for example. 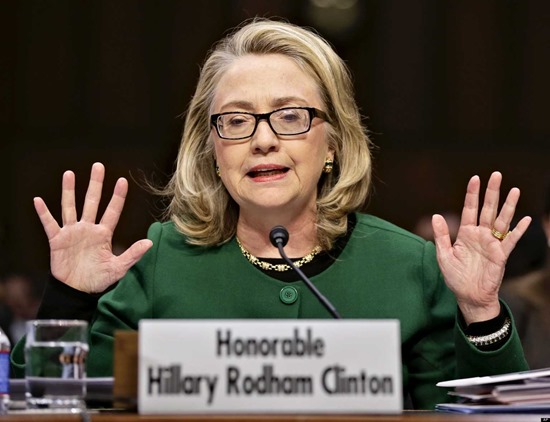 â€œWhat difference at this point does it make!?!â€

Her aides were tripping over themselves to congratulate her for nailing it at the first Benghazi hearing:

Notably, the emails show her aides congratulating her after her initial January 2013 testimony on the attacks before Congress. During that hearing, she got into a dispute with Sen. Ron Johnson, R-Wis., over the conflicting narratives about the motivation for the attack and what preceded it â€“ the State Department had come under fire for initially pointing to a protest over an anti-Islam film. Clinton told Johnson, expressively, â€œwhat difference, at this point, does it make?â€

During and after the hearing, aides forwarded Clinton congratulatory messages.

â€œIâ€™m being flooded with emails about how you rocked,â€ deputy chief of staff Huma Abedin wrote. â€œAnd you looked fabulous.â€

Yes dahling, you looked mahvelous. Ambassador Stevens, not so much.

[[What difference at this point does it make!?!]]

When her aids are asked “How do I look?” They should respond with

“What difference at this point does it make!?!â€

Reminds me of the Scientology head who heard how great he did on a TV interview when, in reality, he was horrible. He never did another. Odd for the heard of a “church” to never do interviews.