I was going to sum up last night’s debate for you, butt Andy Levy did it for me:

When all was finally said, and done, the night’s Academy Award went to….Carly!

Best Director goes to whoever is doing her debate prep.

And Best Makeup and Hairstyling Award (yes, my little doubting Thomases, there is one) goes to one of her little people too. 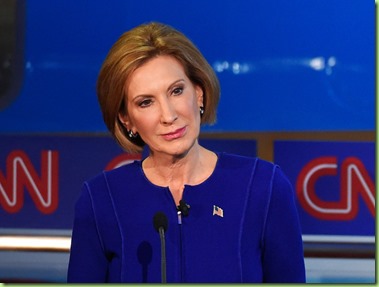 She looked very presidential, and I think a lot of people would vote for THAT face. And it didn’t hurt that she sounded presidential too, with an impressive grasp of foreign affairs. Plus she demonstrated an innate ability to go for the jugular, choosing to attack The Donald’s business acumen.  It takes hutzpah to attack a successful businessman when your last two CEO gigs ended on less than, shall we say, high notes. Anyway, definitely the Best Performance of the night.

A few other random thoughts, in no particular order:

The CNN crew completely lost control of their own debate. The advertising department took over the length of the debate (oversold commercial time, so CNN extended the debate for an extra hour) and the cats took over the rest of the debate about 5 minutes in; and refused to give it back.

The few people who tried to stick to the rules and wait their turn lost. Still, I give the Best Short Film award to Ted Cruz, hands down.

Despite a strong over-all performance Marco Rubio failed his audition for Best Leading Actor with his poor explanation for his poor voting record in the Senate: he said that nothing ever gets done in the Do-Nothing Congress anyway. Maybe that’s because nobody ever shows up?

And when the CNN crew tried to take control back they asked…a question about vaccines?  Boy, that’s a burning issue these days. And what woman would you put on the $10 bill? Seriously? They do know that Muslims would not approve of that, right?  And the candidates answers included Margaret Thatcher and Mother Theresa? They did hear the part about it being a U.S. $10 bill, right?

The Extras Award of Excellence: everyone else, too many to mention.

I think The Donald best summed up my reaction to the debate last night:

terrible debate, CNN pitted one against another using (mis)quotes and prevented them from attacking Hillary.

Trump’s psych background served him well. He said more with his face than everyone else did with words. In that debate environment he was “talking” constantly while everyone else placidly played by (most of) the rules.

3 posted on 09/17/2015 6:11:35 AM PDT by wastoute (Government cannot redistribute wealth. Government can only redistribute poverty.)
[ Post Reply | Private Reply | To 2 | View Replies]
To: wastoute
Trump’s psych background served him well. He said more with his face than everyone else did with words.

The joke debate. Why don’t you in the media grow up?

I saw a list of his degrees the other day. Sort of a short CV. I had to wonder if they were honorary or actual earned degrees. Sure, they were a lot of psych but it was quite a list.

No, the pic of Alan Rickman shows a smile. Apparently, Fiorina never smiles.

I realize looks can deceive, but you have got to be kidding. FioRINO is the stuff of nightmares. The knuckle-rapping, hall-pass-withholding teacher. Miss Gulch on skull-drilling heels. The dead-eyed babysitter who packs duct tape. Central casting’s top pick for psycho nanny.