First order of business today: Results of the first two playoffs in Round One of the Sweet Sixteen: 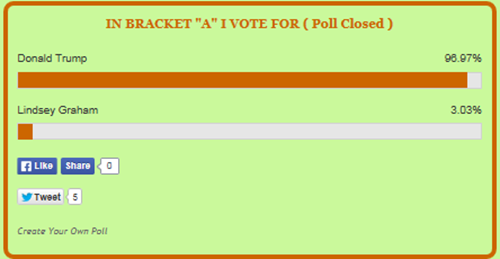 Bracket B: Rick Perry proved you have to do more than play bass in order to come in as second fiddle in this band. 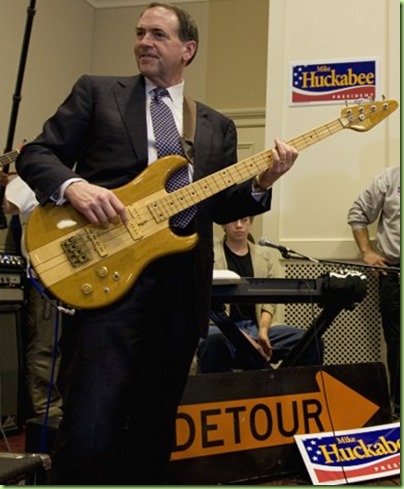 Huckabee enjoyed a late-day surge as news of his criticism of Big Guy’s Built-a-Bomb-for-Iran plan circulated; alas, it was not enough to overcome Perry’s early lead.

In other news, America’s first historic gay black president continued his multi-colored magical mystery tour to promote alternate life styles in Africa (where, to be fair, there are already a few too many alternate lifestyles). 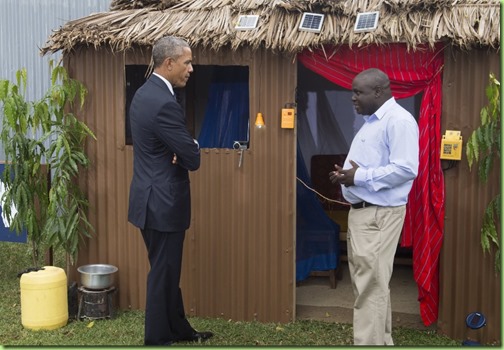 At each stop he brought his message to the heathens, warning them that they had to ignore their “religion or culture” if its stance on gay marriage was deemed to be inferior to that of the enlightened “State’s.” Let the record note that when white men did this sort of thing a few centuries ago it was known as “cultural imperialism.” 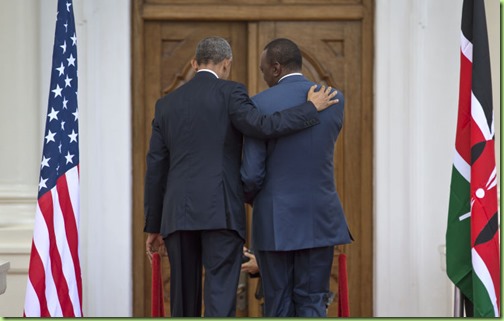 “Take your hand off me dude. We do not have that phenomenon here.”

Barry took time out from his African preaching tour to turn his sites on GOP candidates, calling them “ridiculous” and “sad.” 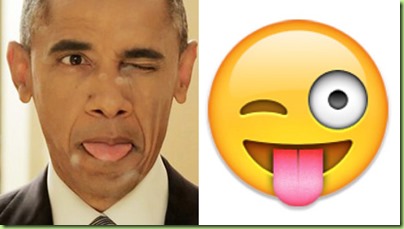 Lady M remained at home, snubbing the very African Non-Americans that her husband was trying to convert to Social Justice, American Style. She was too busy to accompany him as she must prep for the First Family’s annual August vacation on Martha’s Vineyard – a dream vacation previously known as “white privilege.”

Next round of matchups will be coming soon….

Magic Negro back in the land of his birth.

if only he would stay there.

2 posted on 07/28/2015 5:33:45 AM PDT by Vaquero ( Don't pick a fight with an old guy. If he is too old to fight, he'll just kill you.)
[ Post Reply | Private Reply | To 1 | View Replies]
To: NOBO2012
It's really irresponsible for Obama to push homosexual activity in a part of the world where AIDS wiped out 30% of the population a few decades ago and where people are too poor and ignorant for safe sex practices or western AIDS treatments

AIDS destroyed Africa and wiped out the regions hopes for a brighter future by killing off its carefully cultivated next generation of educated professionals, leaders and managers. The death rate in this class was as high as 80% in some areas:

Africa is suffering horribly because of the devastation of an entire generation of it's best and brightest, along with the massive suffering of all classes. An AIDS epidemic continues to devastate Africa to this day and Obama is undoing and undermining hard fought and won victories in the anti AIDS education battle Africa's leaders and George Bush fought against the African AIDS plague in the last decade.

Obamas African homocentric gay sex evangelism bullshit is nothing more than a death sentence for an Africa which is still losing it's battle against AIDS. Obama's active promotion of dangerous sex practice in Africa is an especially evil and wicked thing to foist on the people of a region of the world suffering massively due to AIDS