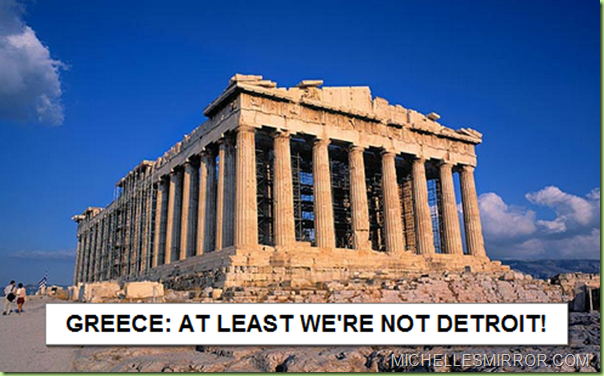 Well congratulations! You are now! Except for one thing: after a few non-lethal union concessions, Detroit got the State to bail them and their pensions out. Greece just said “no” to the EU’s demand for concessions, so…this should be fun.

Hard to believe isn’t it? The country that founded democracy has discovered how to destroy it. Well actually, Alexis de Tocqueville identified that mechanism a couple of centuries ago:

“The American Republic will endure until the day Congress discovers that it can bribe the public with the public's money.”

And we’ve been implementing it incrementally ever since: 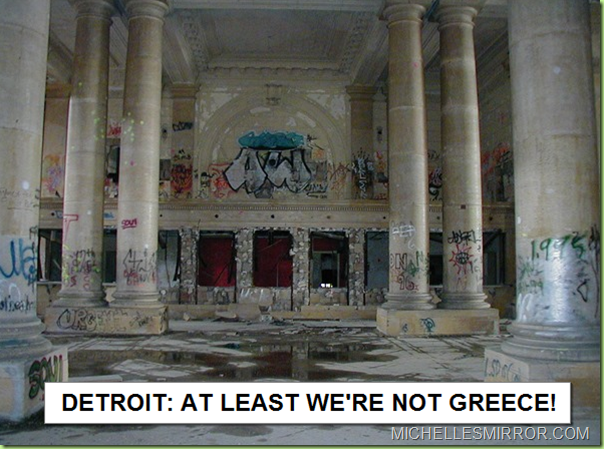 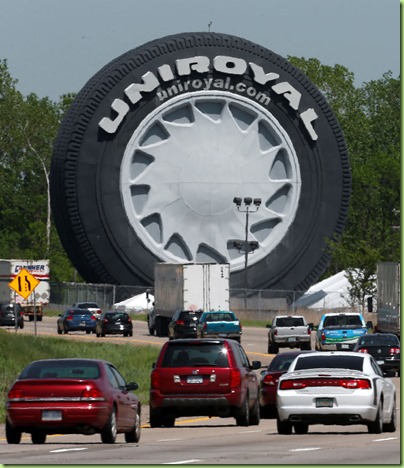 Detroit’s giant tire on I-94: time for another lube job

Alas, De Toqueville never actually said that about the bribe. Thoroughly de-authenticated long ago. Which doesn’t make it any less true!

I’m starting to think that Greece may be invoking a democratic “safety device” against an autocratic and undemocratic European government.

To start with, the EU government has behaved in an irrational manner, with idealistic philosophical motives not underpinned with reason. Leftists do this far too often in all sorts of ways.

In many ways, Greece was like a reasonably happy, if alcoholic, street bum. He would ask others for spare change, or work as a day laborer, use it to buy cheap liquor, dumpster dive to eat and sleep under a bush.

Enter the leftist, convinced beyond argument that the bum’s *real* problem is that he is not paid enough money to afford nice clothes, an apartment to live in, and all else his heart desires. So they give him “other people’s money”.

This does not make the bum any happier. He shuns living indoors, he uses the extra money to buy liquor for his bum friends, and he neither bathes nor washes his clothes so they soon look like bum clothes.

“But you promised to turn your life around!”, says the confused and unhappy leftist. “All that money I gave you was a loan, and I expect you to repay it!”

The leftist has no way out of this conundrum, and they will never, ever admit that they were wrong. So they try to change the subject with some equally unrealistic, idealistic scheme about something else.

Greece, for its part, is likely so disgusted with the leftist fool that it intends to leave the free apartment and go back to happily sleeping under a bush.

Greece elected socialists who did not get the politics right. Another country that squandered their riches.

Just as good. Who cares about De Toqueville anyway? How many even know his name anymore. The important thing is getting the idea out there. It's an extremely important idea.

Socialist on socialist action. When Mensheviks fight Bolsheviks, the Mensheviks lose, because they are not willing to go to the extremes of Bolsheviks.