There seems to be some controversy over whether Marie Harf is being promoted or unceremoniously “kicked up stairs.” Butt let’s be honest; not only is Spokes-mouth Barbie not the sharpest knife in the drawer, she makes the butter knife look like a lethal weapon:


Harf is a dim bulb and the complete authorized version of the doctrine according to Barry shines none too brightly to begin with. Reduced to talking points and subject to questions, the doctrine is quickly reduced to parody. Thus Marie Harf. – Powerline

Thus the “promotion” to  Senior Advisor for Strategic Communications to Secretary of State John Kerry where she will be able to focus on negotiations between the U.S. and Iran regarding nuclear weapons. 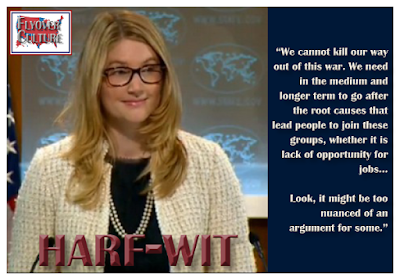 Look Mahmoud, you can’t kill your way out of this war so you can only use your nukes for peaceful purposes - or is that too nuanced for you?

Should you find yourself suffering from  Harf withdrawal syndrome, here’s a great highlight reel that you can play whenever you need a fix, as well as a Twitter link: #harfisms.

Harf: a smirking piece of liberal filth mouthing the words her masters give her.

Oops, I Harfed up my lunch.

I just know you are Harfing those statistics on Globull Warming.

There are lots of ways to accurately use ‘Harf’ as a noun/verb/adjective/adverb.

Good usage examples and the article is a very hot steaming bowl of snark, too! I hope Ted Cruz is watching and taking good notes as the political season continues to heat up for next year’s main event.

When I see Marie Harf, it makes me wonder how clueless young girls have important jobs in our government. How the heck hires such people in the first place?

And it makes me look forward to a future administration, in which adults will be charge again.

A position where Ms. Harf may actually outshine her boss -- but it's a low barrier.

send the harf to nuance ISIS