What’s the opposite of diversity? UNIVERSITY! (h/t *Kate at Small Dead Animals; she’s a genius.) 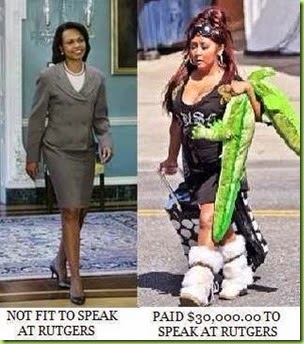 With The Closing of the Collegiate Mind, their victory is complete

Remember when universities were bastions of freedom of thought and speech? Yeah, those were the good old days. They’ve now morphed into finishing schools for political correctness which certainly qualifies graduates for a job in education or journalism but isn’t as helpful in fields such as medicine, accounting, engineering and information technology. Butt as they say, “it is what it is.” And besides, what do you expect for an average investment of $80-100,000?

However I would think university administrators everywhere would be concerned when they’ve lost Kirsten Powers, perhaps the last rational liberal  in the country, and certainly the last one at Fox News.

Christina Hoff Sommers has been speaking on college campuses for two decades challenging students to embrace what she calls "equity feminism" over "gender feminism." In her view, the former is focused on legal equality between men and women, the latter on disempowering women by portraying them as perpetual victims of the patriarchy.

At Georgetown, a sign outside Sommers' lecture provided a "trigger warning" to alert students that her talk could trigger traumatic feelings. 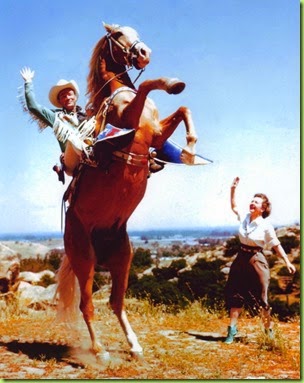 Another sign pointed students to a "safe space" for those who were upset by Sommers' presence and promised that "hate speech" would not be allowed. The implication was clear: Sommers' views were "hate speech."

Yikes, what else will these baby-cakes not be able to handle after they leave the rarified enclave of the university? How will they survive in the workplace where adequate trigger warnings and safe spaces are not provided?

And now, beyond trigger warnings for really bad stuff, we also need to be concerned with “micro-aggressions” and “bias motivated incidents.” From Powerline:

In addition to banning “micro-aggressions” some colleges (University of Colorado, Boulder to be specific) have developed a new no-no: BMI’s – Bias Motivated Incidents. And highlighting them with official posters that could only have been created in the legally high Rocky Mountain thin air: 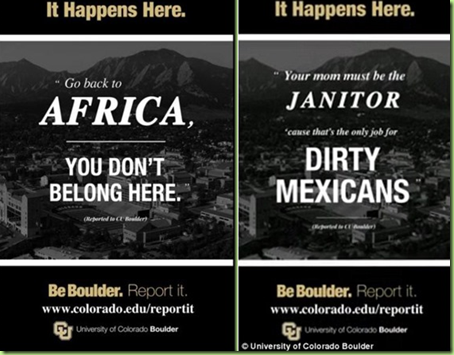 Designed by the Future Copy Writers of America

Fortunately this current crop of snowflakes has not completely lost their sense of irony:

First, many of the sensitive souls on the Boulder campus are offended at the poster campaign itself, and have torn down a number of the posters. (If I was still there I’d surely grab one as a souvenir.) Strange how the very people who always say they want a “conversation about racism” always back away from having that “conversation.” But of course, we know what “conversation about racism” really means today: You shut up, and confess your collective white guilt.

Finally, “BMI” is an ironic acronym for what’s happening here, because “BMI” is better known by most ordinary human beings as the acronym for “body mass index”—in other words, a measure of obesity. So it oddly fits here, as an acronym for the bloat in college administrations that is both making college less and less affordable and stifling speech and free expression at the same time.

The current campus sentiment seems to be “first we ban all the conservatives” because, you know, free speech for me butt not for thee:

So it’s hard to figure how George W. Bush got his first speaking gig since leaving office:

I haven’t been asked to give a commencement speech yet, butt if I ever am, I will focus on practical advice.  If you can’t find the job you think you deserve do not lecture job creators on “aspiration and avarice” - which doesn’t mean anything, butt it’s a nice alliteration; I’m guessing here, English major?) 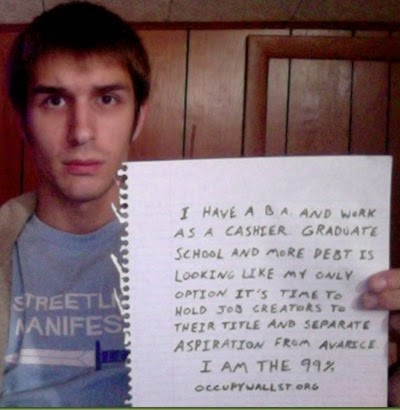 Also, if you’re already deep in a hole of debt, stop digging. If you think “graduate school and more debt is looking like my only option” perhaps you should have taken a few courses in math, economics and logic.

I don’t expect to be contacted re. my availability for speechifying any time soon. With that, I’ll close with this archival summary of your First Amendment Rights in the Obama rabbit hole:

I’m sure snookie was most profound.

I searched this out after complaining to Wells Fargo about their two Mommies, gay adoption ad, and receiving a reply about “diversity” being a core value.

Life is very simple: accept and embrace the liberalism orthodoxy and espouse the left’s dogma no matter if you have no idea what it means. Popularity, the path to wealth, and the company of the elite await those who agree with the fantasy narrative. As an extra bonus, you can then do whatever pleases you: lie, cheat, steal, use drugs, engage in wild sex, outrageous behavior. The world will be your oyster. But, if you turn away from the true lefty way, they will destroy you and turn loose their venomous tongues to rip you apart.

Diversity is an obstacle to overcome, not a goal to be achieved.

Forget where I heard that.