Today, in honor of the 70th anniversary of Victory Day in Russia (the country that imprisoned members of the Pussy Riot band for insulting Herr Putin) we focus on the unique American bedrock principle of free speech. 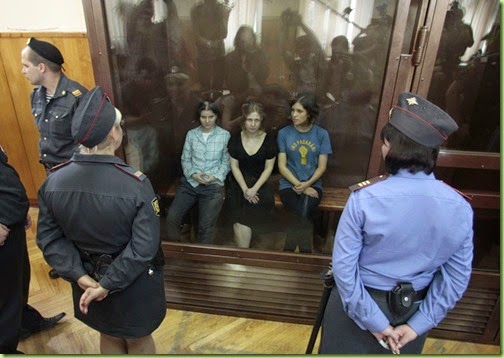 Butt “free” doesn’t mean what you think it means…anymore. It’s more like what “free” means in Russia now, as we are being advised not to provoke while exercising our free speech. Bill O’Reilly said so, Donald Trump said so, Laura Ingraham said so and Chris Cuomo (brilliant law school graduate, son of Andrew and CNN legal correspondent) even went so far as to tell us that Pamela Geller was guilty of “hate speech” which is not covered by the First Amendment (now that’s NEWS!). 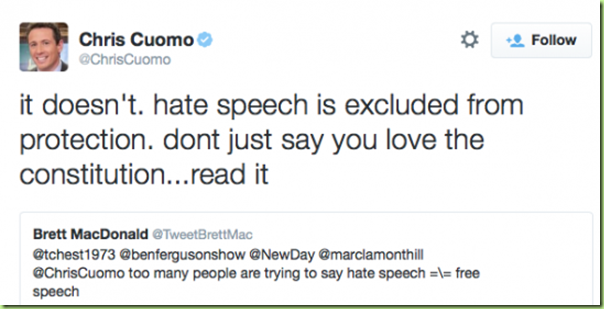 It’s been a long week around Casa Motus, so I leave you with these assignments: First, read Ace’s review of the freedom of speech issue, if for no other reason than to see O’Reilly put in his place:

O'Reilly is a pretty thoughtless man, given to the sort of rantings of the Lunchbucket Philosopher, basing his philosophy not on Judeo-Christian teachings, as he never tired of cliche-ing, but on his visceral gut reactions.

I knock Megyn Kelly for being part of the smug Upper Middle Class Consensus, which is essentially a center-left worldview, even among alleged conservatives, but she's also, unlike Bill O'Reilly, a smart and cutting thinker who is more than capable of thinking in terms of abstraction and cool reasoning, and here she takes heated exception to Bill O'Reily's cowardly carping about Ms. Gellar and how he wouldn't have made the point in quite that way.

Butt also because to see blame placed for the erosion of our principles where it belongs:

This is about, specifically, the careerist, cowardly, go-along-to-get-along mores of the Upper Middle Class, the class of people whose parents were all college educated, and of course are college educated themselves; the class that dominates our thought-transmitting institutions (because non-college educated people are more of less shut out of this industry).(snip)

Thus, our institutions of thought propagation are dominated by the very people who can be easily cowed by the Social Justice Warriors, and who will, therefore, adjust their speech in order to not run afoul of the thoughtless -- and frequently lunatic -- thugs of the censorious left.

Ace goes on to defend Pamela Geller despite a certain level of personal animus:

Now, as a personal matter, I have had sharp differences with Ms. Gellar. We do not get along.

But this is entirely besides the point.

And proceeds to remind us:

The current dominant class, the class that controls the political-media establishment, is this Upper Middle Class, leftism-inflected consensus, and until people can begin seeing this and seeing past it, and until they can begin making their first loyalty to Idea and Principle, which are universal and eternal, rather than Class and Cult, which are nothing but happenstance and ego, we will continue having an "opposition" which continues genuflecting to leftist conformity rather than standing up for ideas.

To escape the Matrix, you must first see the Matrix -- something Andrew Breitbart was fond of observing.

As they say, READ THE WHOLE THING.

And I’ll wrap up with Megyn’s two back to back warrior defenses of the First Amendment. Well done Ms. Megyn, well done.

Megyn Kelly on Free Speech 1:  If This Is Where We Stand On Free Speech, 'the Jihadis Are Officially Winning'

Megyn Kelly on Free Speech 2: “We don’t compromise America’s bedrock principles just to make other nations like us more.”

BOR occasionally speaks like a rational person. Doing so takes a horrible toll on him and he has to revert to his true self to keep from losing his identity....

Whatever street creds O’Reilly had, and they weren’t much, vanished along with Trump’s and Ingraham’s the other night. Such stupidity in a saner age would have put them in therapy. In B.O’R’s case I’d surmise,”Follow the Money”.

I hardly ever watch O’Reilly , have a difficult time listening to him, don’t care for him. period. I am disappointed in Ingraham for her say on this and it has changed my opinion drastically about her.

Megan Kelly can get fuzzy at times but she is dead on about this subject. I believe she will be the one to bump O’Reilly from his throne.