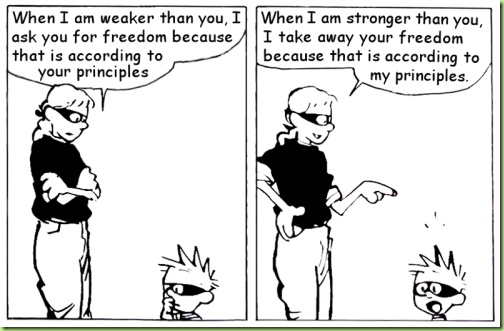 The notable thing about Culture War 4.0 is its consistent rejection of tolerance in favor of government enforced morality. Remember your Muad’Dib: “When I am weaker than you, I ask you for freedom because that is according to your principles; when I am stronger than you, I take away your freedom because that is according to my principles.”  - Ben Domenech, The Federalist

Ed Driscoll succinctly summarizes the emergence of the new liberal fascism in his recent post, and provides an example:

BASH: So no regrets about Mitt Romney, about the Koch Brothers. Some people have even called it McCarthyite.

REID: Well… [shrug] … they can call it whatever they want. Um … Romney didn’t win, did he?

And there it is, in a nutshell – the difference between conservatism and progressive liberalism: 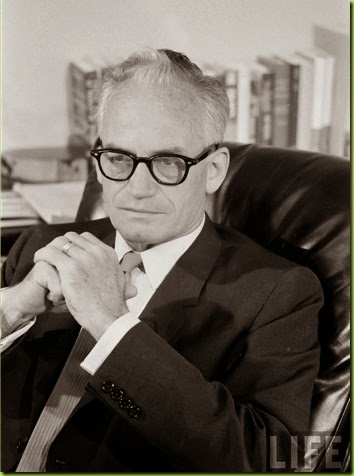 Barry Goldwater: I would remind you that extremism in the defense of liberty is no vice! And let me remind you also that moderation in the pursuit of justice is no virtue!

Harry Reid: Extremism in the Defense of Fascism is No Vice i.e., “We won.”

So as you go about your day, wondering who made the mess we find ourselves in Occam’s Razor may prove itself a useful theory:

The country has been heading in the wrong direction economically and morally since the New Deal. We got a brief respite under RR.

How Harry Reid got to where he was just amazes me. He has the IQ of dust and was nothing more than a divisive knife in the Senate.

Do you really think he believes this, or is just a chronic liar?

ALL OF THE LEFT ARE: CRONIC LIARS

They do not have the answers, so they lie, pie in the sky stuff which never works out.

However, the left made their biggest mistake with Obama. He has turned out to be their undoing. The wheels are coming off the Obamamobile; and the stench from the exhaust is beginning to really permeate the whole of the USA.

Finally, America is waking up.

All of that time we thought we had two parties, now we are finding out that we only had one and a half party.

Remember when Obama was promoting Obamacare? He was speaking to a group, castigating the medical profession and insurance companies. He actually had the nerve to say that doctors didn’t inform diabetic patients about proper diet and exercise so that they would have to have their feet cut off enabling doctors to collect more money from the insurance companies!

I wish all Democrat voters could see this. I wonder if it is on youtube. I think I will take a look.

I found the Obama youtube video. Look for the title: “Obama says: “surgeons make $40,000 to amputate a limb”.

I hope this gets all over the internet.

Romney may not have won, but he can still see out of both eyes.