What a shock: Pollard imprisonment based on lies
Israel Matzav ^ | 2/24/15 | Carl in Jerusalem 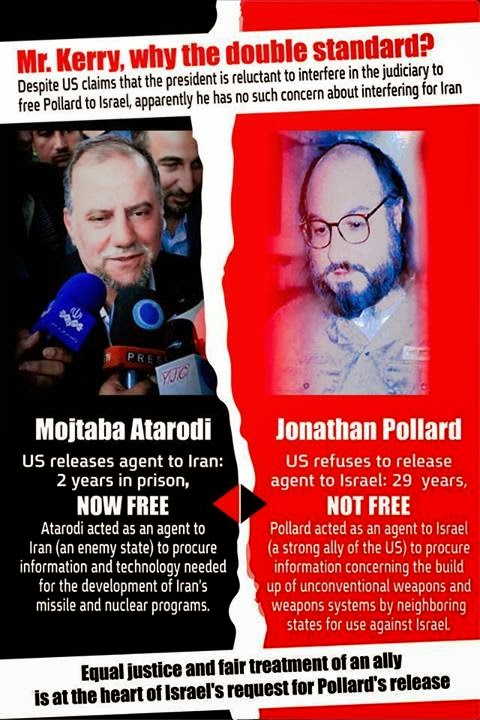 I really feel like slamming some of the chickens**t American Jews who regularly comment - both on this blog and on Twitter and Facebook - that Jonathan Pollard should rot in jail because what he did was so terrible they're afraid of being accused of having 'dual loyalties' if they actually question Pollard's life sentence. Much of the infamous Cap Weinberger memo (that Pollard's lawyers were never allowed to see) has been declassified, and it shows that much of the US government argument for keeping Pollard imprisoned is based on lies and mischaracterizes what Weinberger (an anti-Semite in his own right) wrote (Hat Tip: NY Nana).


Key portions of a critical classified document on which the US government has cited as justification for keeping Jonathan Pollard in jail have been declassified – and his lawyers say the government has been "dishonest" in "hiding behind the mask of 'classified information' to materially mischaracterize the nature and extent of the harm caused by Mr. Pollard."

Lawyers Eliot Lauer and Jacques Semmelman, who have represented Pollard for 15 years pro-bono, say the newly disclosed material shows that any harm possibly caused by Pollard was only "in the form of short-term disruption in foreign relations between the United States and certain Arab countries."

"That is not at all the same thing as harm to U.S. national security," they write in a World Net Daily op-ed, "and it was dishonest for the government to pretend that it is."

The government position for 30 years has been that Pollard must remain in prison because a secret note from then-Secretary of State Caspar Weinberger stated that Pollard caused greater harm to U.S. national security than had ever occurred previously.

The lawyers state that the U.S. government's "deception had its most blatant and prejudicial impact at Mr. Pollard's parole hearing held in July 2014, during which the government invoked the Weinberger declaration and - without showing it to the parole commission - urged the commission to accept its representation that the document substantiated more harm to the national security of the United States than had ever occurred previously."

"In its decision denying parole, the commission took the government at its word and essentially parroted the government's characterization of the Weinberger declaration when it wrote that Mr. Pollard had caused 'the greatest compromise of U.S. security to that date,'" noted the lawyers.

"That is an outright falsehood," the lawyers write, "and the recent revelations prove it... [It] is now revealed that Mr. Pollard provided Israel with information concerning the 'political-economic affairs of Middle Eastern nations,' various 'Middle Eastern orders of battle,' and the 'technology of Soviet weapons and radar systems' used by various Arab governments."

"The potential consequence [thereof] is described by Mr. Weinberger as 'a high probability of harm to the foreign relations of the U.S. with friendly Arab nations'" – and nothing more than that.

The op-ed details the type of information Pollard gave Israel, and the modest and temporary damage it caused to U.S. relations with some countries – but not to U.S. security.

Hang your heads in shame chickens**t American Jews. Maybe you should worry more about why your government has been holding an American Jew imprisoned for 30 years for a crime that normally carries a 2-4-year sentence than you worry about accusations that you hold dual loyalties (as if any of you holds any loyalty to the Jewish state).

So why did then-CIA director George Tenet threaten to resign if Bill Clinton released Pollard (as he promised to do) in exchange for Israel signing the Why Why Wye agreement? Probably because Tenet knew that if what was really in the Weinberger document was made public (and there would have been no more reason to keep it classified 17 years ago had Pollard been released), he and other government officials who had lied about its contents would have found their butts in a sling. Now, they're all dead or retired.

So the guy wasn’t a spy? If true he should be let out of jail forthwith. On the other hand, if he was a spy, my views are bit harsher than what the law normally allows. As for who he was spying on behalf, my only interest in that would be to know whom to ship the body to.

Or better yet an Iranian Agent. Kerry Promises them the Bomb in Ten Years or Less!

Pretty much sums it up for me and I'm willing to bet ... a whole lot of OTHER people as well

Can/will anyone synopsize for us ?

Aren’t people DEAD because of the information he sold?

If people can make $millions selling US secrets, and then get a 2-4 year sentence then that is going to seem like an awful good deal to a lot of people.

He should have been shot.

Message to Pollard-— convert to Islam, renounce Israel and trash Netanyahu. Barry will have you on the next day flight to Tel Aviv on El Al.

Spied for Pakistan, too.

Two years ago the Mossad had their man in Europe flip on them and they kidnapped and threw him in prison —one they constructed specially for just HIM.

He died there under extremely spooky circumstances.

I am more concerned as to why the other guy was released then I am about Pollard still being in jail.

Jonathan Pollard refused to give the names and information related to his handlers.

And a lot of the ‘concern’ about ‘helping’ him is to make sure and get him out before he finally decides to sing.

He was a spy, but I guess the distinction is about what information he was after. He wasn’t trying to get information on U.S. weapons or strategies, he was looking for information that we had about other countries’ weapons and strategies. Still espionage, but the main purpose was not intended to harm our country.

As for executing him, that isn’t really done with spies anymore. They are more valuable as bargaining chips, in case one of our spies gets caught, or we need something else from another country. You can’t trade a dead spy for anything.

“Aren’t people DEAD because of the information he sold?”

Possibly, but if so, they would likely be Arabs and not Americans.

What is also interesting is...
that even if the charges were true, accurate....

even if the charges were true, they’re keeping the Jew locked up after they’ve released most of the others

note that Obama releases IslamoNazi terrorists who have American blood on their hands, and does so in a manner that enables them to return to the battlefield to shoot at, capture and torture, or crucify more innocent people (including Americans)

a fish rots from the head...

It’s not Pollards job to decide what intelligence to share with our allies.

What if they were people posing as Israelis, instead of the real thing?

What if that information got into the wrong hand?

I don’t blame the Israelis for spying, I blame Pollard for giving in and being a spy.

Of course that’s not his job, he was a spy, that is illegal by its very nature.

Used to think Pollard could FO and Die.

But we are releasing hardened terrorists from Guantanamo because they promise to be nice? And this Iranian thug?

"...Pollard gave the Israelis vast amounts of data dealing with specific American intelligence systems and how they worked. For example, he betrayed details of an exotic capability that American satellites have of taking off-axis photographs from high in space. While orbiting the earth in one direction, the satellites could photograph areas that were seemingly far out of range..."

"A significant percentage of Pollard's documents, including some that described the techniques the American Navy used to track Soviet submarines around the world, was of practical importance only to the Soviet Union. One longtime C.I.A. officer who worked as a station chief in the Middle East said he understood that "certain elements in the Israeli military had used it" -- Pollard's material -- "to trade for people they wanted to get out," including Jewish scientists working in missile technology and on nuclear issues..."

"William J. Casey, the late C.I.A. director - the Israelis used Pollard to obtain our attack plan against the U.S.S.R. all of it. The coordinates, the firing locations, the sequences..."

""numerous" analyses of Soviet missile systems had been sold by Pollard to Israel, and that those documents included "information from human sources whose identity could be inferred by a reasonably competent intelligence analyst..."

"During his year and a half of spying, his Israeli handlers requested specific documents, which were identified only by top-secret control numbers. After much internal assessment, the government's intelligence experts concluded that it was "highly unlikely," in the words of a Justice Department official, that any of the other American spies of the era would have had access to the specific control numbers. "There is only one conclusion," the expert told me. The Israelis "got the numbers from somebody else in the U.S. government..."

"They often deal with signals intelligence, or SIGINT, and their world is kept in order by an in-house manual known as the RASIN an acronym for radio-signal notations. The manual, which is classified "top-secret Umbra," fills ten volumes, is constantly updated, and lists the physical parameters of every known signal. Pollard took it all. "It's the Bible," one former communications-intelligence officer told me. "It tells how we collect signals anywhere in the world..."

I question ... why have appeals gone nowhere?

I'll try to take the time to read through this ... but what is the US afraid of ?