I didn’t intend to file a report on the Grammys this year, butt alas I feel compelled as the politics of race have once again injected themselves into what should have been just another celebrity self-celebratory event.

It wasn’t a shut out of black entertainers like the Oscar nominations, butt Beyoncé did not win the album of the year award as Kanye West felt she should have. So he took it upon himself, just as he did when Taylor Swift won instead of BFF Bey in 2009, to take to the stage in order to let the world know that she was robbed, again, by another blue-eyed blond.

We get it Kanye, Taylor and Beck aren’t black

And make no mistake, Kanye believes this is all about race:

"Beck needs to respect artistry, he should have given his award to Beyoncé. At this point, we tired of it. What happens is, when you keep on diminishing art, and not respecting the craft, and smacking people in the face after they deliver monumental feats of music, you’re disrespectful to inspiration.” 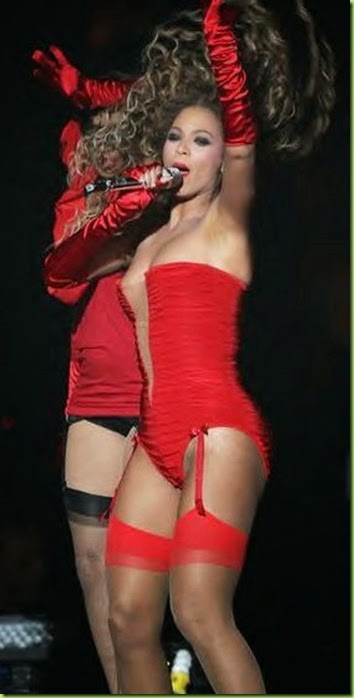 Nor was that the end of the racism at the Grammys. I don’t really know who Zach Braff is butt he revealed himself as a racist with this tweet comparing Pharrell’s Grammy bellboy outfit to the flying monkey in the Wizard of Oz (a part which Zach apparently played – wait, isn’t that racist?). 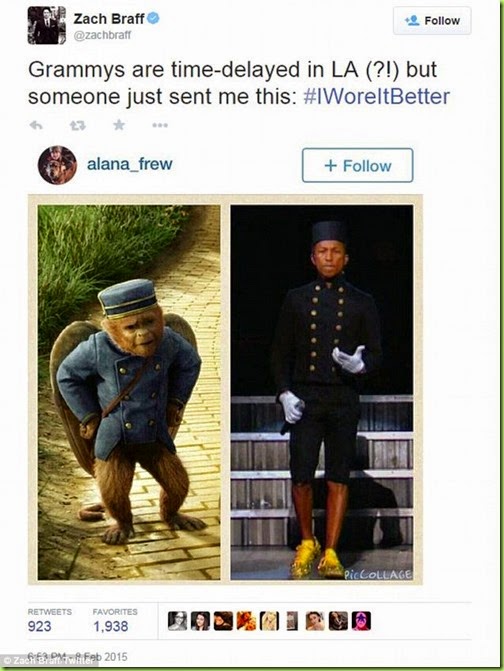 Poor Zach, he was apparently all like “What!? That was racist!? I didn’t know that was racist!” Boy some people are so naïve when it comes to race they don’t even know when they’re being racist.

So despite MOTUS’ general “no simian references” rule, I’m going to have to cast my support with Zach on this one. I mean, come on – if you don’t want people to call you a flying monkey, don’t dress like a flying monkey. How hard is this?

Besides, Pharrell was one of our peoples of color who “delivered monumental feats of music” for the win at Sunday’s award show:

His performance during the award show also provoked a reaction as it included dancers in black hoodies who struck a 'hands up, don't shoot' pose - a reference to the slogan used by protesters after the Michael Brown shooting. 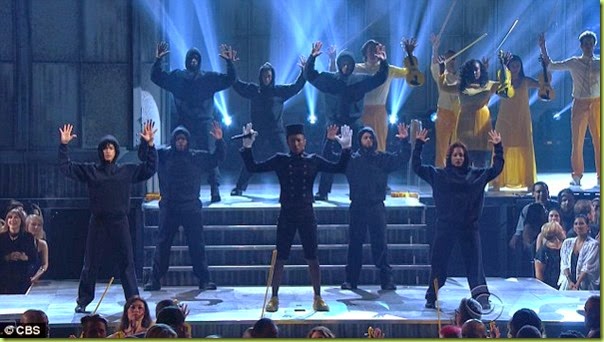 Unfortunately the “hands up” gesture adopted by fans of social justice everywhere to register their displeasure for racist cops everywhere turned out to be based on something that NEVER EVEN HAPPENED. Boy that sort of thing, as a rule, could get you in trouble. Butt if you’re an “artiste” doing it as part of your “inspiration” it’s considered brilliant and edgy. If I was Brian Williams I would apply for membership in THEIR union.

Anyway, getting back to Kanye’s attacks on Taylor Swift and Beck for winning their Grammy: he didn’t target them because they were blue-eyed blondes,

butt rather because of where they randomly happened to be (on stage, instead of Beyoncé). 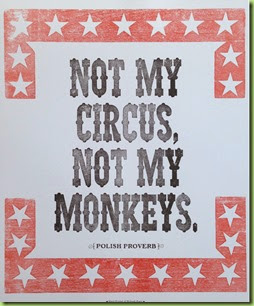 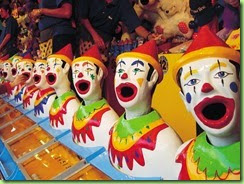 Would you clowns just shut your yaps (I’m talking to you BO, Josh and Psaki)!

OMG the girl in the red outfit, I swear you can clearly see some private parts. Holy Toledo. Then again, could just be my imagination......

Nobody has ever expressed a more convincing argument that the Grammys are complete and utter dog squeeze.

And was the word “music” mentioned?

It’s not, and she needs a Brazilian. (Wax, that is)

5 posted on 02/11/2015 7:45:24 AM PST by OpusatFR
[ Post Reply | Private Reply | To 2 | View Replies]
To: NOBO2012
Unfortunately the “hands up” gesture adopted by fans of social justice everywhere to register their displeasure for racist cops everywhere turned out to be based on something that NEVER EVEN HAPPENED

Liberals like to practice something called "Reality Nullification" in order to make their case.

I never watch this stuff,& now after seeing what I missed...on this post & what was shown on the TV news....I know very well why I don’t watch it. What a load!

And the liberal media has aided and abetted these efforts. How I wish we had some semblance of a fair and balanced media in this country.

I have not watched the Grammy’s since around 1995. As a musician I can’t even relate to a lot of the stuff they do there. I confess though, that I was intrigued by all the things going on in the song “Single Lady” by Beyonce. It’s very musically interesting.

Taylor swift is just the modern Debby Gibson / Madonna in that her stuff is catchy and she adds being a very savvy business person. She’s being marketed very well.

Do they give awards for that?

Kinda like Obama’s Nobel prize ruins the credibility of the prize.

Gee, I guess I need to take a closer look.

Though actually, I would love to see a return to more modesty in these performances.

I remember some awards show, a couple years ago, Amy Poler (sp?) and Tina Fey were hosts, and telling sex jokes. We have become way too immodest, in my opinion. So much of what we see on TV would have been censored years ago.

I’m going to have bumper stickers made:

Beyonce is a performer. Beck is an artist. It’s that simple.

If there is an industry of music, lyrics and choreographers following you around presenting you material to represent as your own ... well then you’re really just a performer or performance artist. You could be really really good performance artist, but what business do you have winning music awards?

Becks an artist. He writes his own songs and music, perhaps with collaborators from time to time. His songs are hit or miss. They seem to be either really really good and under appreciated, or they suck and garners no accolades. That’s an artist.

“We have become way too immodest, in my opinion. So much of what we see on TV would have been censored years ago.”

None of them have wit. Potty mouths and coarse sex jokes that would pass an eighth grader’s tee-hee and snicker test are a poor substitute for humor.

Looks like she had one a few months ago.

This indicates how far we have fallen, that we are talking about what she’s got going on down there. If she were not in such an immodest outfit, nobody would have any basis for discussing it in the first place.