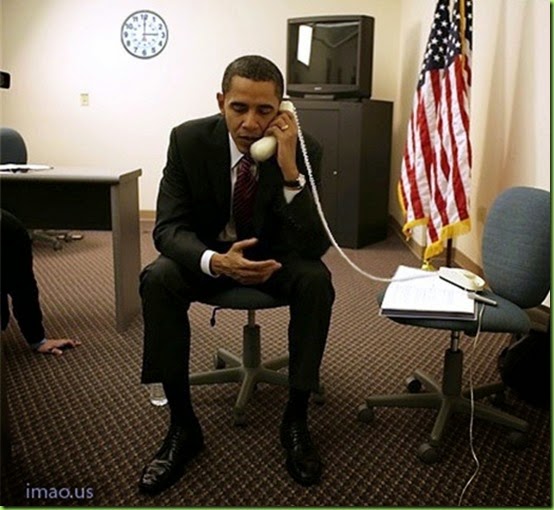 “Don’t bother me, I’m negotiating with myself.”

Now why on earth would Bibi breech protocol and not advise Big Guy that John Boehner invited him to speak to Congress in March? I suppose it might be that he disagrees with Barry’s position on not imposing additional sanctions against Iran. Maybe he has taken umbrage with Barry and the Brit Twit for boasting about their lobbying of Congress against additional sanctions. Or perhaps he’s not confident that Big Guy’s awesome diplomatic skills are adequate to get Iran to give up their nuclear weapon ambitions just because he’s willing to negotiate with Tehran without preconditions. 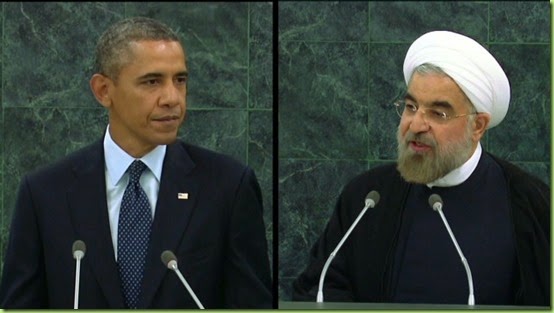 "Negotiating with oneself seldom produces a barroom brawl." – Warren Buffett

Or maybe this is why Bibi wishes to address the American Congress directly: 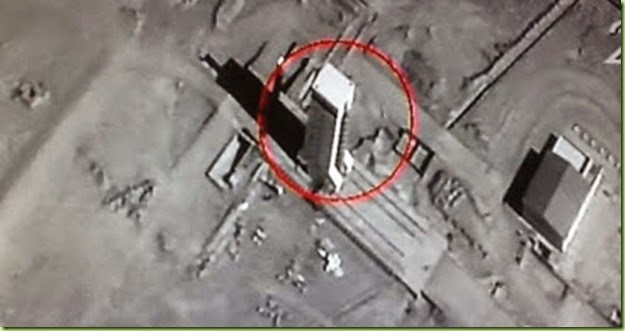 Iran has built a 27-meter-long missile, capable of delivering a warhead “far beyond Europe,” and placed it on a launch pad at a site close to Tehran, an Israeli television report said Wednesday. – Doug Ross

The fact that Iran is fond of chanting both “Death to Israel” and “Death to America” is irrelevant in face of Prime Minister Netanyahu’s breech of protocol. That’s personal and Big Guy takes that sort of thing seriously.

The Obama administration reportedly is fuming over Israeli Prime Minister Benjamin Netanyahu’s plans to address Congress in March regarding the Iranian threat, with one unnamed official telling an Israeli newspaper he will pay “a price” for the snub.

“He spat in our face publicly and that's no way to behave. Netanyahu ought to remember that President Obama has a year and a half left to his presidency, and that there will be a price."

I hate to be the one to bring this up, butt we do all remember who started this “chicken sh*t” fight, don’t we? I mean, it isn’t really proper protocol to call your ally “chicken sh*t” either, is it? – Washington Examiner

A senior Obama administration official recently described the Israeli prime minister as “chickenshit,” according to Jeffrey Goldberg of The Atlantic. 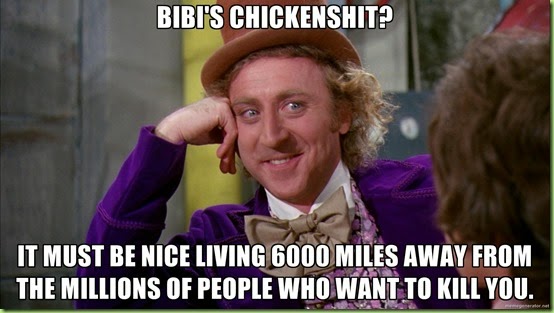 Nor, I would think, is being “rude and condescending” to an ally generally considered appropriate protocol:

Based on a transcript of the conversation, obtained by Israel’s channel 1, Obama “behaved in a rude, condescending and hostile manner,” the network’s foreign correspondent concluded.

And some people might consider it a failure of protocol to ignore a request by an ally to visit when he’s traveled half way around the world:

… An official in Jerusalem said that the Prime Minister's Office sent the White House a message stating that although Netanyahu will spend only two and a half days on U.S. soil, he is interested in meeting Obama and is willing to travel to the U.S. capital specifically for that purpose. The official added that the White House rejected the request and said that at this time Obama's schedule does not allow for a meeting. – Telegraph

Especially when BHO did find time to go on one of the late night talk shows during the same time frame. 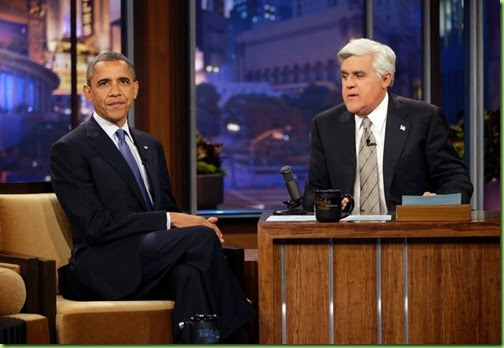 And I’m quite sure that leaving your guest cooling his heels in a conference room while while you go off in a huff to “have dinner with your family” is not considered proper international protocol.

For a head of state to visit the White House and not pose for photographers is rare. For a key ally to be left to his own devices while the President withdraws to have dinner in private was, until this week, unheard of… - Hot Air

Butt let me be clear: protocol is for the little people. We don’t need no stinkin’ protocol. 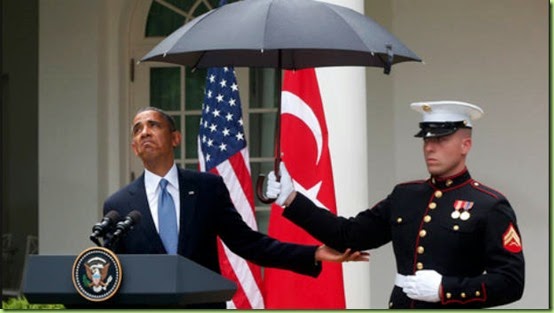 Because keeping our powder dry is more important than protocol

Well maybe this last round of peevishness can be laid to rest, now that the veiled threat of retaliation against Netanyahu has been unveiled:

Israel’s Army Radio, via the Jerusalem Post, reports that local sources claim U.S. President Barack Obama arranged the leak of a Mossad report on the Iran nuclear talks as an act of revenge against Israeli Prime Minister Benjamin Netanyahu for agreeing to speak to Congress in February about radical Islam and the Iranian threat.

By the way, does anyone know what the proper protocol is for spying on television reporters, using the IRS to harass political opponents, deceiving the public about the nature of an attack on our embassy, lying about being able to keep your doctor and healthcare plan, and flooding America with diseased people from foreign countries?

Not clear on the others, butt Moonbattery certainly thinks BO’s handling of the Iran thing is anything butt correct:

"There is a line between incompetence and treason. Whether Jimmy Carter crossed it by withdrawing support for our ally the Shah and thereby helping the current Iranian government to power is debatable. With Obama [and the media], it is an easier call." 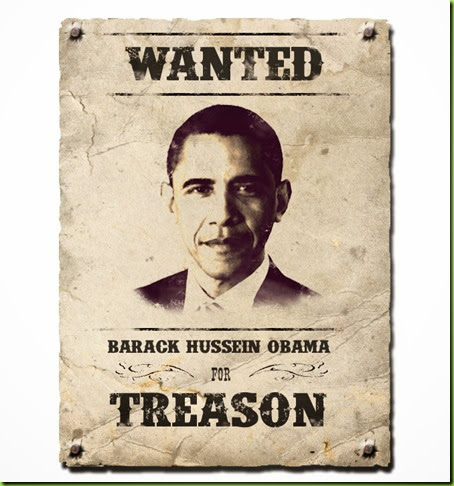 2 posted on 01/24/2015 8:57:56 AM PST by spokeshave (He has erected a multitude of New Offices, and sent hither swarms of Officers to harass our people,)
[ Post Reply | Private Reply | To 1 | View Replies]
To: NOBO2012
Since when did the legislative branch need permission from the executive to do anything? B.B. Netanyahu, along with Stephen Harper and Tony Abbott are now the leaders of the free world.

WHY OBAMA HATES AMERICA, EUROPE AND THE WEST

Let’s play Connect the Dots. This is not a rocket scientist level game once you complete the connections.

Obama’s hatred for the West, Western Europe and especially the Brits goes back to the days when the Brits carved up the old Mesopotamia into what is now much of the Middle East. He returned Churchill bust — a gift from the Brits – within days of entering the White House and routinely disrespectfully props his feet atop the desk fashioned from the timbers of the famed warship HMS Resolute the Brits gifted to President Hayes in 1880) due to their sometimes harsh treatment of Africans in their colonies there, mainly Kenya, his “alleged” father’s birthplace.

And Obama hates the Israelis because the place was populated by Jews from Europe after it was carved out of what was then called “Palestine” in 1948 (while overlooking that the Jews immediately busied themselves by blowing up the King David Hotel there and killing British citizens and soldiers in their successful effort to drive the Brits out).

This guy is full of pent up anger and hostility for nearly all things European, Western and, by extension, AMERICAN (which was ALSO populated by white folks from Europe).

His psychological and emotional roots lie in another part of the world, a part dominated by Islam!

When we factor in that Valerie Jarrett – widely recognized in Washington as his BRAIN – has an IRANIAN mother and, according to reports, her parents STILL LIVE THERE, his otherwise incomprehensible softness toward Iran and their potentially disastrous nuclear weapon program suddenly becomes all to comprehensible, doesn’t it?

And how could we overlook his mentoring by Frank Marshall Davis, the America hating communist from Chicago and his grandma and grandpa Dunham, all of whom found themselves on FBI watch lists for years in the 50s and 60s!

I dedicate this rant to all the no and low “voters” and the drive-by lamestream media responsible for putting into the presidency an UNVETTED, UNQUALIFIED, AMERICA-HATING, FAILED COMMUNITY (DIS)ORGANIZING CLONE OF CAUNCEY GARDNER (look him up!).

I periodically ask God to help us before our former “shining city on a hill” completely disappears into the dumpster of history but why would He? We kicked Him to the curb decades ago.

6 posted on 01/24/2015 12:13:12 PM PST by Dick Bachert (This entire "administration" has been a series of Reischstag Fires. We know how that turned out!)
[ Post Reply | Private Reply | To 4 | View Replies]
To: NOBO2012
Here's the original of that top photo before obozo's minions got it pulled and photoshopped the background out.

7 posted on 01/24/2015 12:25:44 PM PST by Dick Bachert (This entire "administration" has been a series of Reischstag Fires. We know how that turned out!)
[ Post Reply | Private Reply | To 1 | View Replies]
To: Dick Bachert
perhaps soon Obie can Join Revrunt Sharptons at something theyre TRULY qualified and ever so well suited for...?