So, if you were a fruit, what kind of fruit would you be? Barry thought he was a grape:

Unfortunately, with his root stock, Barry’s more of a blackberry: small, prickly, seedy and filled with pith. 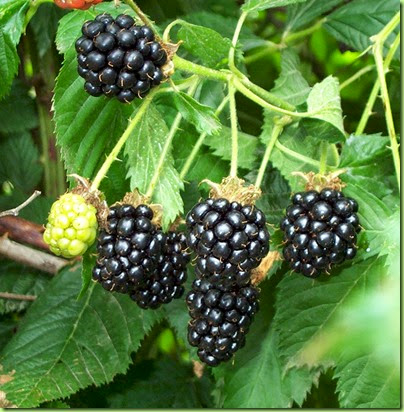 And while you can make wine from blackberries, it doesn’t age well. I’ll let Michael Goodwin at the NYPost explain:

The presidency is sinking, but we are expected to believe that only the president is blameless.

We are witnessing the total collapse of a bad idea. Obamaism, a quasi-socialist commitment to a more powerful government at home and an abdication of American leadership around the world, is being exposed as a historic calamity. It is fueling domestic fear and global disorder and may well lead to a world war.

[Musical Interlude "Peel Me A Grape"]

For all his narcissism, he didn’t make this mess alone.

He was aided and abetted by every Democrat in Congress. They marched in lockstep with his cockamamie policies, from ObamaCare to open borders. They protected corrupt leaders in numerous federal agencies, from the IRS to the Genera Services Administration. They stymied efforts to find the truth about Benghazi and the Fast and Furious gunrunning debacle.

They ceded their constitutional obligations and allowed Obama to crash the system of checks and balances. The vast majority stood silent while he gutted the military and abandoned our allies, including Israel, Egypt and Saudi Arabia, and courted Iran, the most menacing nation on earth.

With painfully few exceptions, Democrats put their loyalty to him above their duty to America.

And now they must be punished. All of them.(snip)

This is a national emergency and the only responsible action is to vote Republican for every federal office.

So don’t forget - you heard it here first - through the grapevine:

So I’m issuing this important warning: The Obama Hope and Change whines from the 2008-2016 vintages have been tainted by Botrytis cinerea; also known as “bunch rot” it is a necrotizing fungus that robs grapes of all their potential.  Not only will the whine not hold up well, butt in order to prevent the rot from spreading to every vineyard across the great country of America the only option we have is to immediately begin ripping out the infected vines and replace them with vines resistant to the fungus. This job must be completed no later than 2016.

So you all have your assignments, now get out there tomorrow and start rippin’ them out by their roots.

I like blackberries.
I think obama is more a crab apple.
Every crab apple I’ve ever tasted were nasty and bitter,so that suits him to a T.
A small useless piece of fruit.

He is a horse apple.

Clown Prince nobola and his hate-filled ilk are worse than any kind of fertilizer. These degenerates are destroyers...just like the Aliens in the Alien films.

I had to look that up.Never heard of horse apples.
Said they are also called monkey balls,those I’ve heard of.
I won’t go there with what I’d like to say next.

An unfortunate smearing of the noble blackberry.