Is it too soon to dub this mess Ebolagate?

I note that Democrats everywhere are trying to sidestep that designation by spreading the party line that Ebola is not a threat and there’s no reason to stop flights in and out of West Africa just because it’s a horrible disease that kills 70% of it’s victims. And West Africa used to be the only place it lived.

Dr. Friedman is the keynote spokesmouth for the official position that the only thing we have to fear is fear itself:

“We remain confident that Ebola is not a significant public health threat to the United States,” he testified before the House Energy and Commerce Committee. “We know Ebola can be stopped with rapid diagnosis, appropriate triage and meticulous infection-control practices in American hospitals.” – NY Daily News

None of which occurred in the case of Duncan Thomas, butt don’t let that inconvenient fact impair your judgment. 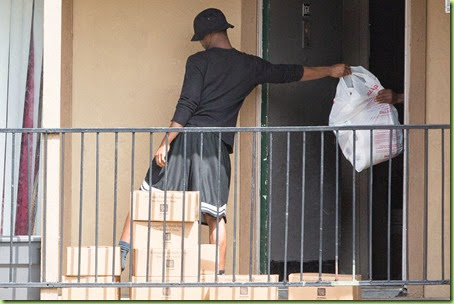 Dr. Friedman made his case against banning travel from West Africa in cogent testimony to Congress yesterday; arguing that if we don’t let Africans fly the friendly skies, they’ll just arrive here “over land” where it will be impossible to catch and monitor them if they are showing signs of illness:

Dr. Frieden said banning travel would mean the U.S. won’t be able to check people for fever and contacts if they arrive in the country through other means, such as over land. “We wouldn’t be able to provide all that information as we do now to state and local health officials,” he said. - WSJ

It’s probably just me butt I think I would have taken a slightly different tact, as that makes it sound like maybe we should be doing more to close our porous borders. 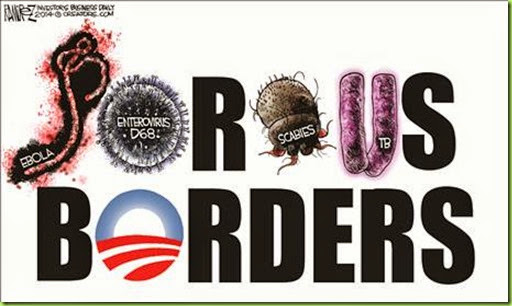 I think I might even start looking for a different spokesmouth altogether if I were Big Guy, whereas Dr. Friedman argued himself into a complete paradox during a press briefing just the day before his testimony.

A reporter said, "In a video message to countries in West Africa that are experiencing Ebola outbreaks, President Obama told residents in these countries in West Africa that they can't get the disease by sitting next to somebody on a bus.  Did the CDC vet that message before it was released and posted on US embassy websites, and is it true that a person runs absolutely no risk of contracting Ebola on public transportation such as a bus?"

FRIEDEN: Yes, CDC vetted the message -- and, yes, we believe it's accurate.  I think there are two different parts of that equation.  The first is, uh, "If you're a member of the traveling public and are healthy, should you be worried that you might have gotten it by sitting next to someone?" and the answer is, no.  Second, uh, "If you are sick and you may have Ebola, should you get on a bus?" and the answer to that is also, no.  You might become ill!  You might have a problem that exposes someone around you. - CNS News

So, you can’t catch Ebola on a bus…butt you might be able to infect somebody on a bus if you have Ebola? At a minimum I think we should make sure Dr. Friedman gets a little more sleep.

Anyway, I don’t know what our real assessment of the Ebola situation is, all I know is that this is the official government issued uniform I’ve been instructed to wear until further notice: 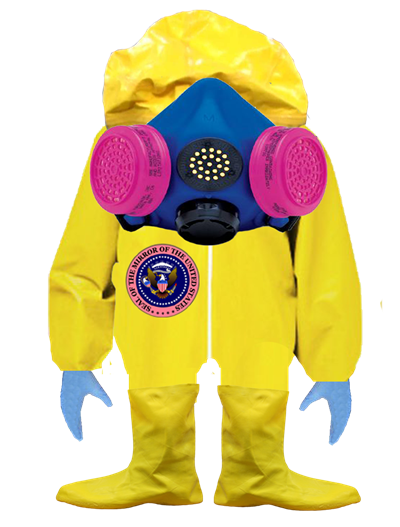 It strikes me as a bit of overkill as I’ve been slogging around in the muck here for nearly six years without any protection. And while it is cute, as you can see it takes the edge off my reflective capabilities - which could be a career-ender for a mirror. My understanding is that this suit is now considered standard operational protocol butt knowing how casual we are about following protocol around here, I don’t intend to wear it during working hours. Of course, if I’m required to fly anywhere…

Anyway, it appears we’ve successful managed the Republicans attempt at needless fear-mongering.This Pew push poll clearly indicates that we are not smart enough to be afraid of Ebola. And thank goodness! The midterms are right around the corner.

Don’t worry though: once the elections are over we’ll be able to get back to you with information regarding exactly how dangerous Ebola is. Likewise, we’ll bring you up to date on other currently non-critical phony scandals such as Fast and Furious, Benghazi, and the IRS scandal. Also, at that point we will be able to advise you exactly how much your Obamacare premiums have gone up. And how many more of your doctors you won’t be able to keep.

In the mean time, please make sure your seat backs and tray tables are in their full upright position and your seat belt is correctly fastened. Also, we request that all mobile phones, pagers, radios and remote controlled devices be turned off for the full duration of the flight, as these items might interfere with the official messages and information your government wishes you to hear.

Thank you, and we hope you’ll enjoy your flight in this Ebola free zone. 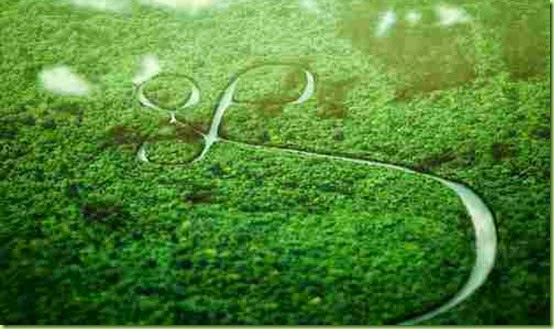 We will be landing at an airport near your final destination soon. 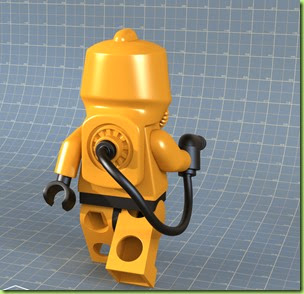 Can I get a cleanup on runway 3!

Don’t paint with such a broad brush. This is moderate ebola, which when treated with respect becomes an important part of your respiratory system and will actually improve your overall health.

The fever, diarrhea and persistent cough are unrelated and have nothing to do with ebola! Probably a workplace illness.