All that historic Transformation created by HOPE & CHANGE® has certainly taken it’s toll. In fact, after an auspicious start, this legacy presidency is beginning to look more like a long, painful, death spiral.

In the beginning though, it was awesome: the audacity of HOPE marked the moment the oceans began to recede and the earth begin to heal. From there our lofty rhetoric launched the first World Apology Tour; reaching out to Muslims and calling for an end to nuclear armaments while simultaneously apologizing for America’s dismissive derisiveness. Next, the Nobel Peace Prize acceptance oration, Barry’s stock was skyrocketing.

Soon, however, we began to “pivot” to “jobs, jobs, jobs” every other week or so. Around the same time we adopted our warrior stance of “leading from behind” and it wasn’t long before we were “hitting Texas league singles” instead of, presumably, homeruns. Eventually we settled on a foreign relations policy that Barry summarized for his fawning press corpse as “don’t do stupid sh*t.” Which, while not exactly elegant, was preferable to his more recent on-the-record proclamation that “we don’t have a strategy yet” for defeating ISIS.

Or, as David Remnick reports: “After six years in office, Obama broadcasts his world-weariness with wan gestures and pauses, with loose moments in the White House press room.”

Well, I don’t need to tell you, Big Guy isn’t the only one who’s grown world weary: From hope and change, to resets and pivots, to singles and doubles, to not sticking your finger in the electric socket. How far we've fallen. Now there are whispers behind his back of Barry being a lame duck president.

All this weighs heavily on things like our liberty and freedom and as a result drags us down day after day.

I HOPE that things get better after the 2016 elections, butt what to do until then? If you’re like me - and I know you are, only minus the refraction and trans-imaging capabilities -  you’ve probably been suffering from Post-Obama Syndrome (POS) for some time now. We need treatment, therapy sessions, to help us get through this. Fortunately, our own Hugh Peterson referred me to an excellent new therapy treatment guaranteed to alleviate some of the symptoms at least some of the time. When combined with regular tea trolley treatments it’s been shown to be extremely effective.

With Raj’s help I’ve tweaked it just a little to more accurately reflect the current state of affairs: 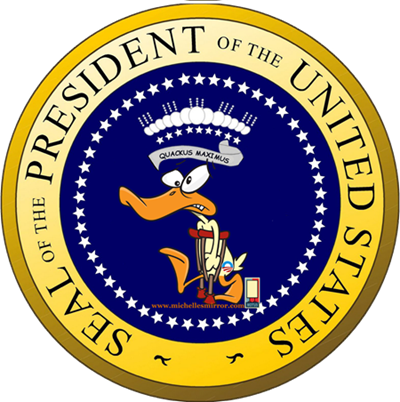 The therapy sessions are easy: it requires no previous knowledge, has no rules and the objective is unclear – just like our foreign policy.

For relief at any time, here’s all you have to do:

No prescription is required and treatment will be available whenever you need it. Go ahead, give my customized POS Barry Therapy® a go and see how much better you feel almost instantly.

Remember: you can’t fix stupid, butt you can fling it around

CAUTION: Use only as directed. This treatment is addictive!