I’ve heard from tons of people regarding yesterday’s  “What’s Your Superpower” post. Some who previously hadn’t realized they possessed superpowers, like HHS.

Until they read my blog, HHS had contended they had “no legal authority to exclude the U.S. territories from ObamaCare.” Then (ahem) upon “reflection” HHS:

discovered new (super) powers after "a careful review of this situation and the relevant statutory language," that enabled them to 'selectively exempt' American Samoa, Guam, Puerto Rico, Northern Mariana Islands, and Virgin Islands from Obamacare.

Most impressive, as up till now only Barry and DOJ were allowed to circumvent the law of the land.

Unfortunately, somebody showed Lady M my poster of her superpower. And while she liked the photo, she denied the superpower I attributed to her. So I thought I’d try again: 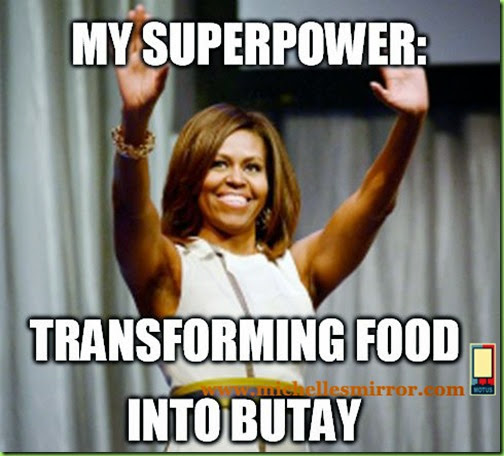 I suppose I’ll hear from her about this one too, butt let me know which you like best.

Oh, and I also got some international reaction. In fact, Pooty himself weighed in on the meme with this: 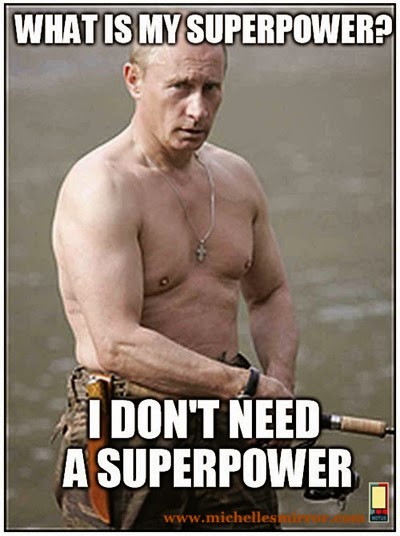 He attached a personal note saying “We don’t need no stinkin’ superpowers.” I think that’s technically known in international circles as “taunting,” although I don’t think it’s against the law in Russia. 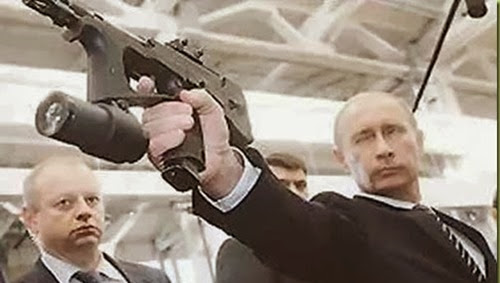 As a communist ruler, I despise the guy but as a warrior he's got my respect......

That picture tells you everything you need to know about Putin and how our potus can't even shine Putin's shoes.......

That picture tells you everything you need to know about Putin and how our potus can’t even shine Putin’s shoes.......

My feelings too. At this point in history I wouldn’t advise going to war with Russia with our new feminized and stripped down military (no offense to the real, straight soldiers that have to share quarters and bunkers with the freaks). Our kids might end up speaking Russian.

Putin’s eyes are too close together, sumpthin wrong with that dude!