Note: if you live in or are visiting the Palm Springs area this weekend, be prepared for a little inconvenience:

The following roads will be closed for vehicle and pedestrian traffic from 11 a.m. Friday through noon Monday for the visit of President Barack Obama and first ...

That’s right! The Regals have landed! For a little me time ahead of Father’s Day. 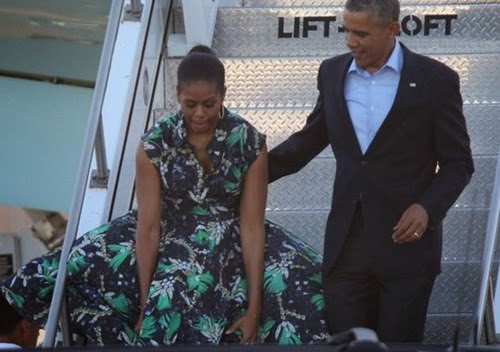 Watch out Marilyn! Michelle is here!

Prior to hitting the links and the cash machine in Palm Springs, BHO managed to squeeze in a “meeting of the mimes” and do a bit of speechify about the increasingly hot situation in Iraq. Specifically, he stated definitively that:

So don’t worry, America, I’ve got your back! Even though we were caught flat footed again surprised by the latest chaos that has erupted in Iraq:

Big Guy will have his Secretary of State get all over this latest world crisis as soon as he’s done reciting poetry in London:

“Out of the huts of history’s shame / I rise / Up from a past that’s rooted in pain / I rise,” - Secretary of State John Kerry intoned at the “Global Summit to End Sexual Violence in Conflict.”

Oh yes, we are on correct path, comrade. (h/t Vereteno)

Look at that beast...she always manages to look utterly gross and graceless while attired in cheap curtains.

This is what the country gets when it lets the DemonicRats collectively squat in the Oval Office and drop their load.

I can’t tell from that picture if Obozo is helping her or trying to push her down the stairs. And where’s Aunt Esther, the mother-in-law? She usually leeches along on all their little jaunts. Maybe the lovebirds needed time alone. (projectile vomit)

We live in the Coachella Valley and last night’s TV coverage was enough to make us puke......fawning goofballs praising the Ditherer-in-Chief while they stood near the runways at the airport to get a glimpse of the Royal Carriage.

She’s trying to hold on to Zer0’s balls.

LOL! Ya gotta love that headline.