Let the record reflect that, having concluded that passing the bill in order to find out what’s in the bill is no longer optimal, the socialist Senator from Vermont has initiated a new set of Democratic rules for passing legislation:

“Some of us are old-fashioned enough to know that maybe folks in the Senate might want to know what is in the bill before we voted on it.”

“But before we vote on legislation, it might be a good idea to understand the full implications of that legislation.”

Apparently too many senators are still busy trying to find out what’s in the Affordable Care Act (currently 8 1/2"  x 11" x 8' including regulations) that they voted for way back on December 24th of 2009. It’s hard to catch up as new regulations are being written daily and Big Guy keeps using his pen and his phone to “rewrite” the law. 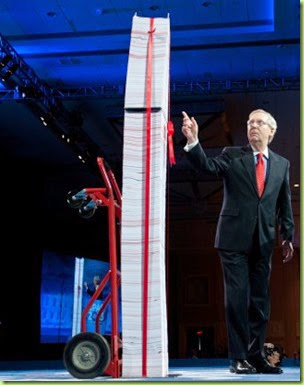 Obamacare regulations as of May, 2013 and still growing daily

So I think it’s perfectly understandable why they didn’t have time to read a 3 page bill holding the VA accountable for the mistreatment of our war veterans prior to leaving for their Memorial Day holiday. As I mentioned the other day, Progs don’t recognize irony unless Jon Stewart points it out to them.

Since Bernie and his colleagues deep-sixed Marco Rubio’s Veterans Affairs Management Accountability Act I decided maybe I should try to help out. I figured a hashtag that could just cut to the chase in 140 characters or less might not be too much for our busy senators to read, so I just tweeted this in hopes of moving the legislation along:


So I figure if I can get my tweet trending, Marco’s bill to hold the incompetent boobs accountable might just manage to get passed when the gang of boobs get back from vacation. 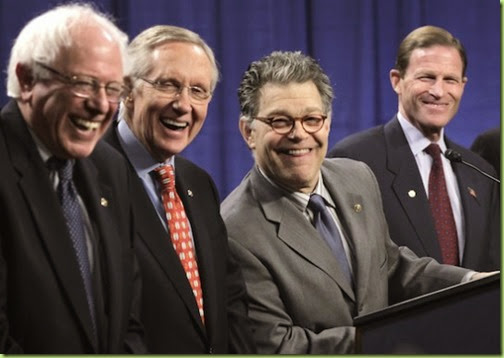 Senators Sanders, Reid, Franken,and Blumenthal: They all look like game show hosts to me.

It may not be as easy as you’d think:

Sanders, who chairs the Senate Committee on Veterans Affairs, has been one of the most outspoken defenders of the VA against allegations of misconduct. When asked about reports of multiple deaths related to long wait times at the VA healthcare system, Sanders told CNN: “People die every day.”

I guess that explains what happened in Benghazi as well: “People die due to widely unviewed “U-tube” ideos every day.” Our heroes deaths could have been due to a bunch of guys just out for a walk one night who decided to go kill some Americans, or, they might have died because a bunch of incompetent boobs in the VA shirked their responsibilities. What difference, at this point, does it make? Right? Why do we need more hearings?

And speaking of game show hosts, I see the tolerant left has lashed out against Pat Sajak for his crime of apostasy against the Church of Global Warming: 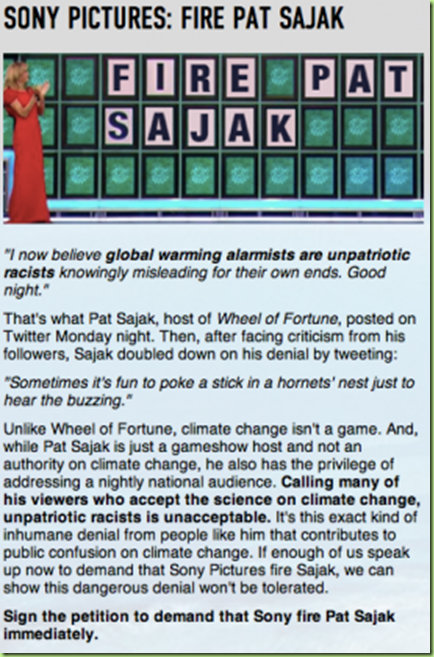 Maybe Game Show Host Jon Stewart will weigh in on this soon, so we’ll know if it’s funny or not.

Anyone want to start Memorial Day Weekend petitions of your own?

“If I Ever Lose My Faith In You” by Sting

Pat Sajak knows his audience and it ain’t those who are screaming for him to be fired.

Thank you, MOTUS. No one puts things in perspective like you do.